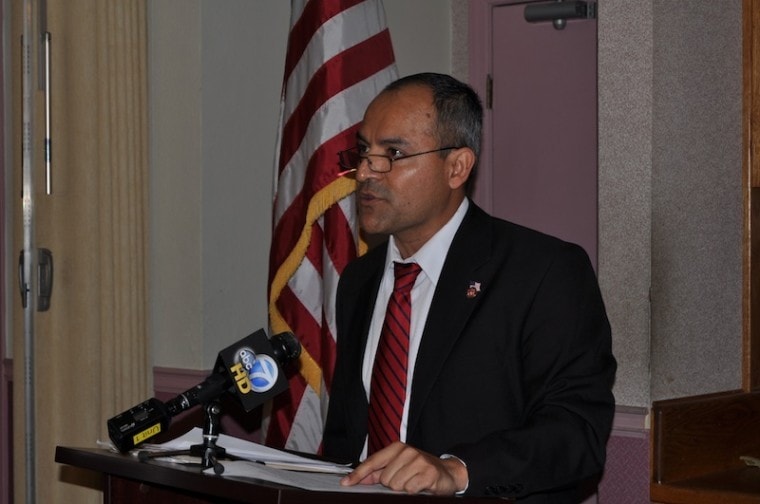 Francisco Barragan, leader of one of the Latino groups calling for a grand jury investigation of Santa Ana city officials, speaks at a news conference Wednesday. (Photo by: Adam Elmahrek)

Wednesday, January 5, 2011 | A coalition of Orange County Latino organizations on Wednesday called for an Orange County grand jury investigation into what they see as abuse of public funds, abuse of the public trust and a lack of transparency on the part of Santa Ana city officials.

The coalition singled out Mayor Miguel Pulido as the “common element” because of his lengthy tenure as mayor of the city and his role in three of the examples of impropriety the coalition emphasized.

The coalition submitted a packet to the grand jury Wednesday summarizing four issues that it believes warrant investigation and, possibly, criminal prosecution.

It wants an investigation into the recent $333,779 payout given to former City Attorney Joe Fletcher, alleged robo-calls on behalf of Pulido by Santa Ana Police Chief Paul Walters during the 2010 election and a $500,000 finder’s fee Pulido was set to receive — but never did — for his role in a sale of state-owned property.

It also wants the grand jury to look into a vote by the Santa Ana City Council on the Station District housing project. The project’s developer and others made campaign contributions to some council members before and after they voted on the project.

The coalition has not, however, taken the additional step of specifically asking for a criminal grand jury to be impaneled by the Orange County district attorney.

Leaders of the coalition aired their complaints during a news conference Wednesday at the Jagerhaus German restaurant in Anaheim. Among those in attendance were former mayoral candidate Alfredo Amezcua and Amin David, the unofficial president of Los Amigos.

Jennifer Delson of the Santa Ana Coalition for Better Government said such a gathering of local Latino groups to address a specific cause is a rare occurrence. “This is definitely a punctuation mark for the Latino community in Orange County,” she said.

Francisco Barragan, who is commander of the Mexican-American Veterans Association, said the examples cited by the coalition show “a pattern of behavior that shows absolute disdain” for the public trust.

This week Voice of OC reported that Fletcher received $191,699 of that payout by way of a contract amendment that allowed him accrue unlimited vacation time.

The amendment also backdated the carryover of his sick leave as though he’d been hired in 1983 and backdated his vacation time accrual rate to the same year, 13 years before his actual hire date in 1996, according to Councilman Sal Tinajero, the only member of City Council who would comment specifically on the issue.

“Why would we backdate someone’s hire date for 13 years? Why?” Barragan asked. Barragan said he believed the vacation and sick leave payout constituted a gift of public funds because it allowed Fletcher to collect a payout as if he had been working for the city for years he hadn’t been.

Art Montez, a former Centralia School Board member who also attended the conference, said the backdating is a “systemic problem.” He added: “Only in politics can you double-dip and exist in two dimensions.”

Barragan also brought up the finder’s fee that Pulido was set to collect for helping an influential consortium put together a winning bid in a state-sponsored auction of public properties. He said Pulido at worst violated the law by being involved in the transaction and at least violated the city’s code of ethics.

Pulido did not return a phone call seeking comment.

Tinajero and Councilwoman Michele Martinez said the complaint seemed to be an Amezcua-orchestrated attack on Pulido.

“I think it’s unfortunate when you have a Latino group and — you know — someone who loses an election is then rallying troops to go after them, because quite frankly the first three [issues] that you mentioned doesn’t seem like it deals with the City Council,” Tinajero said, referring to the coalition’s concerns about the finder’s fee, the police chief robo-call and Fletcher’s payout.

Amezcua could not be reached for comment. However, other coalition leaders denied that the action is politically motivated.

Tinajero again expressed regret that the previous council allowed Fletcher’s contract to be amended as it was but defended the current council’s decision to OK the payout, saying the only other option was to go to court to block the payout and risk possibly a greater amount in city funds.

“Once you enter into a contractual obligation, then you’re rolling out the dice,” Tinajero said.

Tinajero also defended the council vote on the Station District project. “We learned from that; we created safeguards so that doesn’t occur again,” he said.

Councilwoman Martinez said the coalition’s singling out of Pulido is unfair because he was only one of seven votes on the council. “A lot of people want to put blame on him as a mayor, and certainly he has been here the longest,” Martinez said. “But again, when all is said and done, we all have to learn to count.”