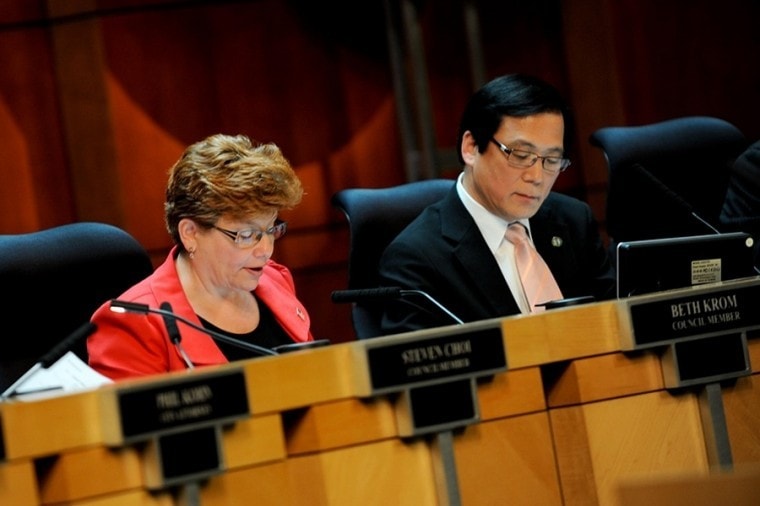 The Great Park Board of Directors chose Beth Krom as their new chairwoman Thursday, as former chair Larry Agran stepped down  to spend more time, he said, on agriculture and forestation projects at the park.

Krom said she hasn’t crafted her vision as chairwoman for the park yet, but said she was excited about what lay ahead. “There are a lot of good times on the horizon,” she said.

She is referring in large part to Great Park Neighborhoods developer FivePoint Communities’ decision to move forward with housing development at the park, which is expected to yield millions in Mello-Roos revenue, and, eventually, much more in property tax increment.

This isn’t Krom’s first time in a top job. She was Irvine mayor from 2004-2008, and Agran said she did an “outstanding job” in that role.

Agran said he stepped down as chairman because he wanted to focus on certain agricultural projects at the park, like the farm and food lab, and and a massive forestation effort at the park expected to take place over the next several years.

Agran also said that, immediately, stepping aside will also allow him to focus on saving the redevelopment agency, which is on Gov. Jerry Brown’s chopping block. Eliminating the city’s redevelopment agency would wipe out the property tax increment, the main revenue source for the park in future years.

Being park chair made it difficult to focus on those efforts, Agran said, because the chairman had to keep “keep track” of the rest of the board’s interests.

“My job as chair has been how do we get everybody together as a team and sort out conflicting interests,” Agran said. “It takes a lot of time. That’s politics.”

Director and City Councilman Jeff Lalloway’s vote for Krom was in line with the friendly new council dynamic between the Republican and the Democratic majority. Though Lalloway cautioned that while he wants to “move forward together” he would be the “eyes and ears for the public for an accountable Great Park board.”

“This is an issue that I’ve thought long and hard about for some time. It’s a very difficult vote,” Lalloway said.

However, Republican Choi broke from the informal peace.

Choi said Krom’s phone call campaign to the directors raised the question of a possible violation of the Brown Act, the state’s open meeting law. But City Attorney Phil Kohn said that unless Krom had informed directors of how others were going to vote, there was no violation of the law.

“That’s a very interesting interpretation, to me it’s very gray and subject to investigation,” Choi said.

Kohn asked directors to speak up if Krom had told them about other directors’ support.