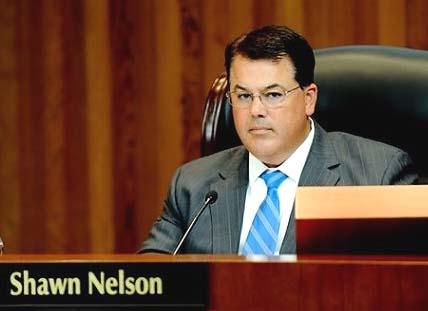 County officials should revise their policies on proclamations, argues Supervisor Shawn Nelson, just on the heels of the board’s refusal to recognize Harvey Milk Day earlier this month.

Milk, the first openly gay elected official in the nation, became an icon in the gay community after being assassinated in 1978 by a fellow San Francisco supervisor.

Many jurisdictions have commemorated Harvey Milk Day since 2009, when Gov. Arnold Schwarzenegger made it an official day of significance in California.

Orange County supervisors have refused to recognize the day for two years running, and things became heated last week when a group of lesbian, gay, bisexual and transgender activists publicly confronted them on it.

Nelson says he doesn’t see himself as a champion of gay rights. In general, he thinks proclamations are “feel-good stuff” that wastes the supervisors’ time. But the confrontation last week bugged him, and he called out his colleagues on the dais.

“The whole purpose of giving away proclamations is not to engage in discrimination,” Nelson said later. “Either we give to everybody or we give it to nobody.”

According to the board’s clerk, the annual list of proclamations is compiled in an ad hoc manner with clerk staffers simply using last year’s resolution as a starting point. From there, the list of resolutions is sent to all five supervisors for any additions.

After all the additions have been made, the board adopts the entire list in one vote. The 2012 resolutions were approved on Dec. 13, 2011, by a unanimous vote and covered a broad array of issues and groups, including Child Support Awareness Month, Social Work Month, Small Business Week, Meditation Week, Long-Term Care Residents’ Rights Week, Grand Jury Awareness Month and God Bless America Week.

Nelson said he understands why the lesbian-gay-bisexual-transsexual community would be upset by Harvey Milk being excluded after considering all that were included. Milk, he said, “was a county supervisor that was murdered on the job in our state. That alone deserves noting.”

Nelson suspects his colleagues didn’t budge for other reasons. “You aren’t voting because politically you don’t like the message,” Nelson said.

But taxpayers always deserve an answer even if it’s one they may not like.

For a different result, and one that isn’t capable of discrimination, Nelson said county officials should reverse the process.

“Send out a broad solicitation once a year for the following year, and anyone who wants to should be on the list,” he said.

Any supervisor who has a problem with someone on the list can pull the organization when it comes up for the annual vote, Nelson said. That’s how Harvey Milk Day should be handled, Nelson said.

“They’re asking to be on the list. My view is put them on the list, and anybody who wants to pull them, go ahead.”

Yet Nelson isn’t going to write any memo. And he’s not going to agendize a discussion. “Here’s the cruel irony,” Nelson said. “If I spent that much time on that, I’d be guilty for the same thing I’m criticizing.”

But if gay activists visit Nelson in the 4th District office, they’ll find a willing supporter who will add Harvey Milk Day to the 2013 list of proclamations.

“I don’t want anybody on the list. But if it’s just to spite them (other supervisors), you bet I’ll put him (Milk) on the list. Because it’s not right.”