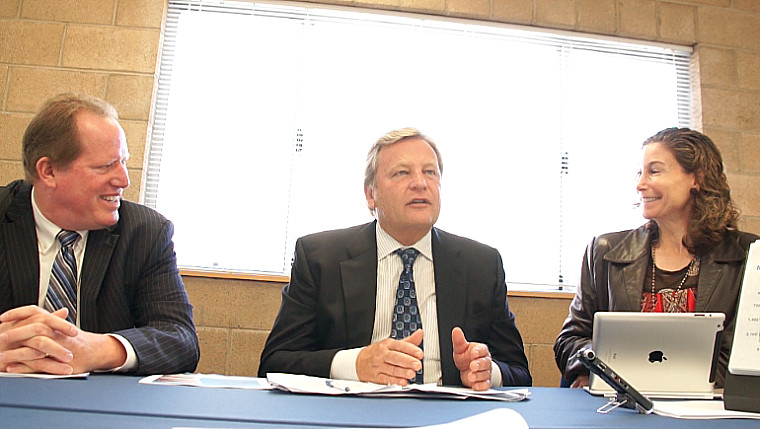 As we reported last week, the public water agency for Costa Mesa plans to dramatically boost its cash reserves, going from about $20 million to $40 million over a five-year period.

Mesa Water District’s buildup, largely financed by a 26-percent increase in water rates, comes despite a county grand jury recommendation that such reserves be kept limited and instead spent to pay down existing debt.

Mesa Water, however, counters that doubling its reserves is financially prudent because it helps the district keep its top AAA credit rating.

To learn more about the district and its finances, we sat down last week with Mesa Water Board President James Fisler, General Manager Paul Shoenberger and Public and Government Affairs Manager Stacy Taylor.

Here are some excerpts, edited for clarity, from that conversation.

Q: What’s been going on at the Water District over the past few years? How many customers do you have? What’s your budget?

Shoenberger: We serve the cities of Costa Mesa, parts of Newport Beach and some [unincorporated] county areas, including John Wayne Airport. Probably our three signature customers are the airport, the Orange County Fairgrounds and South Coast Plaza. That’s about 110,000 folks. We have about a $38-million annual budget, and our board has a strategic plan, which is kind of the guiding document for us running the district. And part of that strategic plan is to be financially responsible … the continuous renewal of our infrastructure, attracting and retaining skilled employees.

Q: We noticed in one of your budgets that your spending on communications had spiked quite a bit,  from $500,000 to $1.6 million. Some conservatives might say, “Who cares where the water comes from as long as when we turn on the pipe it’s on?”

Shoenberger: I think that anybody would want to make sure that the health and safety and welfare of the citizens are fully being considered.

Q: You’re doing that already. In terms of a water district, your job is to make sure the water is drinkable.

Shoenberger: It’s really to protect the health and safety and provide the quality of life that water does provide, and robust communications is part of that mission.

Q: How is that part of that mission?

Fisler: [Communications is not just] saying we’re Mesa Water District. It’s community outreach, it’s community events, it’s participating in all kinds of different forums, such as children’s water education, going to myriad of schools. We have a very robust list of how many schools we’re visiting to teach. It is going to teach stewardship to the children.

Q: Is that the job of a water district, to teach children water stewardship?

Fisler: Yes, water use efficiency — because we want to have water available. We’re a perpetual agency. We want to make sure that there’s water available for future generations. Water is very scarce. We’re under a drought condition in California. Water around the world is a major issue; it’s very political. Wars are going to be fought over water rather than oil …

Taylor: And I have to add part of the communications function is also for transparency. So a lot of what we do is hopefully engaging more of our customers so that they can come to our board meetings and be part of our open government process. And we feel it’s very important to have that kind of interaction.

Q: So are you filming board meetings? Streaming them live?

Q: Are there plans to tape and televise them as they do the city council meetings?

Taylor: We’re exploring but no commitment yet. But that’s something that we’re looking at as an option.

Q: If you have a commitment to transparency, that would be a great place to start if you’re doubling your communications budget. Something as simple as saying “Let me see you deliberate.” Like this debate over a communications plan or a reserve. It’s like sitting at the kitchen table with your family. You get a sense right away of who’s a conservative, who’s a little bit more of a spender, who’s intelligent, who’s maybe a little bit more political. We like to see the sausage being made.

Fisler: You’re welcome to come to our meetings and see it right now.

Taylor: We actually want people to come from their homes, and we want to meet them. That’s why we’re going out in the community, because we want to have the face-to-face dialogue. It’s still one-way communication when you’re just putting something up on video and streaming it on your website. We’re all about the discourse and the two-way dialogue and true conversation and interaction. We’re hoping these kinds of efforts will also increase that kind of activity.

Q: On the reserves, you’re already a triple-A rating, right?

Fisler (holding up fingers): AAA ranges from here to here, and we’re at the low end.

Shoenberger: And we want to be in the middle, actually. Strong AAA.

Fisler: We don’t want to be so close [to the edge] as to lose it.

Fisler: Not lose it as quickly.

Q: What does that mean?

Fisler: You don’t want to be on the edge by 10 dollars and all of a sudden exceed your balance somewhere and lose your AAA.

Taylor: That means our debt financing interest rate goes up potentially, is that correct?

Shoenberger: If you lose your rating. The board, as Jim indicated, does a lot of deliberation and quite a few years ago they had a very serious discussion on how financially strong should Mesa Water be. And it was at that time they came up with the goal of having a strong AAA credit rating. And I think that’s fantastic, and actually the wisdom of that decision has been borne out now that we see cities going bankrupt and agencies being mismanaged. San Bernardino has quit paying their [pension payments] because of their financial situation.

Q: It’s a big difference between being AAA-rated and being bankrupt.

Shoenberger: Exactly, but if you’re AAA-rated you can be confident that you’re strong and you’re going to be able to weather any kind of disaster or economic situation. So I think the wisdom of their decisions has really been played out in this tough economic situation.

Q: You’re beefing up your reserves because you might lose half a point on a bond somewhere? And you’re charging more money for water?

Shoenberger: Financial strength is part of it. As President Fisler mentioned earlier, we have half a billion dollars in facilities — pipelines mostly, pumps, wells, reservoirs, treatment plant. And, you know, this is earthquake country, so it’s prudent that we have enough reserves that we can orderly maintain and replace our facilities and to be able to react in any kind of emergency. So it’s not just the financial strength to keep us out of bankruptcy, to keep our debt payments low. Also to ensure that we’re maintaining and replacing our facilities timely, and something’s there in case there’s any kind of earthquake or some sort of disaster. And if you throw all that in, you say, “Well, how efficient can you guys be?” We are among the most efficient water districts in Orange County. In fact, we have the lowest expenditures per capita of any water district in Orange County.