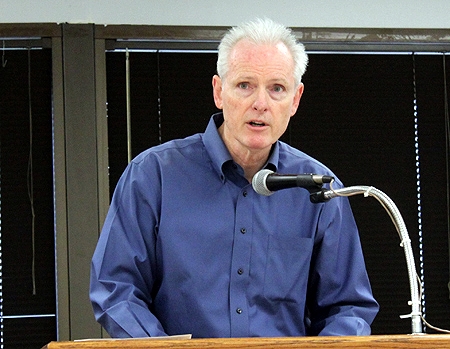 A restricted fund at the Orange County clerk-recorder’s office was so badly mismanaged under Tom Daly — the former department head and current assemblyman — that millions of dollars in spending cannot yet be legally justified, concludes a county internal audit review released this week.

The account, known as Fund 12D, is financed by fees levied on document recording, indexing and certified copies of vital records. The revenue from those sources may only be used for purposes expressly defined under state law, such as modernizing the birth, death and marriage records systems.

Yet Fund 12D and the department’s general fund account were commingled, according to the 72-page County Internal Audit Department report, which is stamped “Critical Impact Audit” in bold red letters on the front page.

Clerk-recorder officials made expenditures from the general fund, then reimbursed it with transfers from 12D.

While that method of 12D spending isn’t by itself a problem, there was no way of identifying which of the four restricted 12D revenue sources were being used for the transfers, according to the audit. Also, no supporting documentation was prepared to justify moving the money, the report states.

Not just 12D transfers were problematic. The audit says that $2.72 million in revenue that should have gone to the restricted account instead wound up in the general fund. The errors stemmed from incorrect programming under the department’s cashiering system, the report states.

Consequently the clerk-recorder staff for several months attempted but failed to reconstruct a record trail that could legally justify the use of $6.79 million in restricted funds over two fiscal years — 2010-11 and 2011-12 — according to the audit.

After studying legal statutes, county policies and “potential allowable expenditure types,” auditors concluded the department “should [audit’s emphasis] be able to develop a reasonable methodology/basis to support Fund 12D usage during the audit period, subject to our follow-up audit,”

The audit is a follow-up to another in March that found staffers had failed to inform supervisors in 2008 that a building up for purchase would need renovations that cost more than the price of the property and that the actual revenue source to buy the real estate was fund 12D.

County supervisors at the time were not happy about being kept in the dark.

And just before that, Daly, who represents the 69th Assembly District, was embroiled over another controversy surrounding a questionable clerk-recorder contract granted to Anaheim City Councilman Jordan Brandman.

Brandman had been paid $24,000 for a draft report studying the possibility of opening another clerk-recorder satellite office. An entire section of the report had apparently been plagiarized from Wikipedia.

The lack of oversight effectively derailed supervisors’ appointment of then interim Clerk-Recorder Renee Ramirez. Hugh Nguyen was appointed instead.

Nguyen, whose tenure is not covered by the audit, said that he concurs with all of the report’s findings and that he will be moving deliberately toward implementing its recommendations.

Whether the department must pay back money from the general fund to 12D and what impact that could have on services remains to be seen. Staff will be implementing a method for determining expenditures that qualify for the restricted funds, and a follow-up audit in six months should help answer that question, according to the report.

Here’s a rundown of some of the audit’s findings.