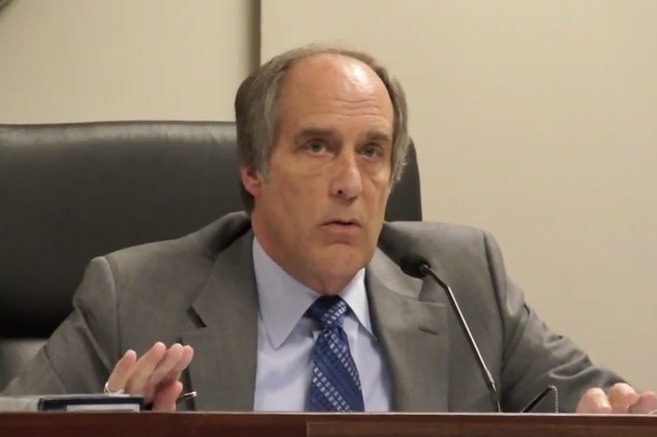 Saying his city’s small-town politics has been corrupted by a flood of campaign cash from outside developers, longtime Lake Forest Councilman Peter Herzog resigned last week calling on residents to rise up and change his city’s politics.

On his way out last week, Herzog fired off a scathing letter that accuses the developers – Trumark Cos. and Brookfield Homes – of “effectively buying the last election” as part of an effort to convert part of an auto mall in the city to a housing development.

Now, he says, its time for residents to take a stand.

“The foundation of Lake Forest was always the people, and now that’s completely upside down, and the people are actually secondary, or in many instances ignored,” Herzog said in an interview. “People need to rise up and take back their community.”

Herzog claims his colleagues – Mayor Scott Voigts and Councilmen Adam Nick and Dwight Robinson – are a rubber stamp council for the developers, who largely financed two of their campaigns last year.

Members of the council majority didn’t return a message seeking comment. Robinson has previously denied that the developers steering contributions to support his campaign influenced his votes.

As Voice of OC reported earlier this year, developers funneled about $50,000 in contributions to the local Republican Party, which in turn funded attack mailers on behalf of Robinson and Nick – including hit pieces on another Republican.

Once elected, Robinson and Nick then cancelled a city study on whether the auto mall development was feasible, and approved the homes – about 220 units in all.

Open government expert Terry Francke has said the council’s action to cancel the study was likely illegal, because the meeting agenda merely said it would be a discussion item.

Herzog, a longtime Republican, said the influence of the developers’ dollars is clear in a city where contributions are usually less than $1,000.

“That’s the kind of activity that you see in Sacramento and Washington, and I think it’s one of the reasons people have no respect for their government any more,” he said.

“Basically you start eating up the fabric that makes up a city.”

The planning commission “had serious questions” about the auto mall development, Herzog said, yet the new council majority approved it anyways.

“So planning is out the window now, and it’s just whatever three people might think,” he said.

Among the potential impacts of the project, Herzog says, is increasing class sizes at what is already the city’s most overcrowded school, Foothill Ranch Elementary, and a lack of adequate parking spaces in the development.

“We’ve been trying to prevent having parking just spill into the streets, and the problems that causes,” said Herzog. “That’s exactly what’s going to happen. And so if you don’t work projects through, that’s what occurs.”

The council majority has defended their move as being business-friendly, and that the free market will decide if the homes are feasible.

Herzog, meanwhile, says the project is in fact very unfriendly to local businesses.

“By rezoning the property they voted to throw out four successful businesses because their building will have to be torn down for the Trumark project,” Herzog wrote in his letter.

Those businesses include Elite Automotive Services, a three year-old business owned by Lake Forest residents that has 23 employees, according to Herzog.

“The owners are a perfect example of the entrepreneurial American dream. The thanks they get are to be thrown out to make room for someone who does not even own the property and has no stake in Lake Forest,” Herzog wrote. “It is clear that ‘pro-business’ now means ‘pro-donor’ in the City of Lake Forest.”

Nick publicly told a resident they were “wasting everybody’s time” by speaking at a meeting, and that they should instead meet at his house, according to Herzog.

“We’re supposed to [get] everything done in public. It’s supposed to be open and transparent, not all behind closed doors in somebody’s house,” said Herzog.

“You can’t tell the public not to participate,” said Herzog, adding that it’s “against the entire concept of our country.”

Herzog says he eventually couldn’t stand being on the council, and realized his time was better spent getting the word out to residents.

“I am not going to be part of having our citizenry looked at and treated that way,” said Herzog.

He also says the trend isn’t unique to Lake Forest, with a major shift in Orange County over the last five to 10 years.

“We seem to be getting more into a lot more money in campaigns, a lot more sound bites and a lot more politics. And really now they seem to be far more antagonistic,” said Herzog.

Where candidates used to campaign from July to November in election years, they’re now fundraising year-round, he said.

“It seems to me we’re going from a little-city atmosphere where you’re focused on the people, to this Washington-Sacramento stuff…and that’s just not what the people deserve,” said Herzog.

The answer, he says, is citizen involvement and engagement.

“Our whole country was founded on this idea of an enlightened citizenry. And it’s worked so well for so long, but we’ve got to get back there and pay attention to who’s getting elected. Who are they really? What do they really mean? And are they focused on the community, or something else?” said Herzog.

“This is important. It will, I think, impact the quality of life here and I just don’t want to see that happen.”