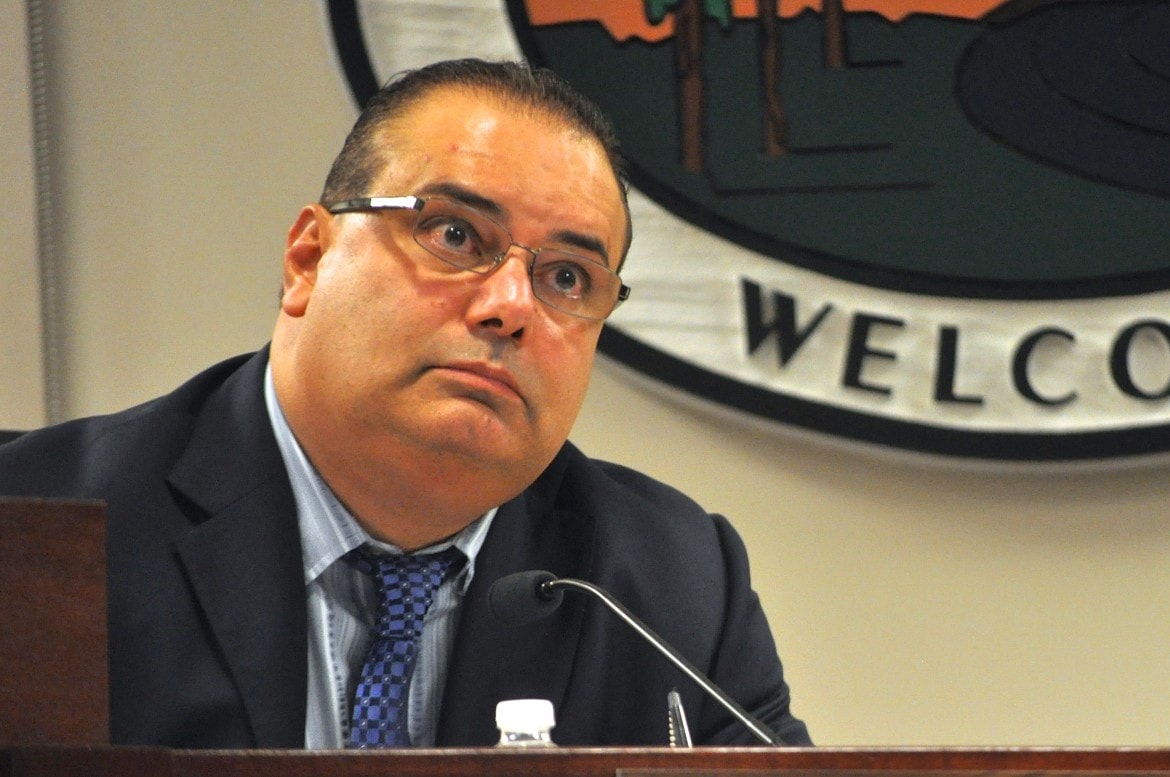 Small town city halls are often full of off-kilter characters. But in recent years, those serving on the Lake Forest City Council dais have crossed the line from run-of-the-mill political theater to absurdist drama.

Among the players are Mayor Scott Voigts, who speaks proudly of his easy access to the city’s overabundance of liquor stores, and former Councilwoman Kathryn McCullough, who spins conspiracy theories about the Islamic State terror group’s infiltration of City Hall.

But the undisputed star of the show is Adam Nick, aka Afshin Nikmanesh, an Iranian immigrant who first ran for council in order to save his ampm convenience store from what he considered illegal competition. Since his initial foray into politics in 2010, Nick has made a string of offers of under-the-table cash and bribes that stretches from his council colleagues to the author of this article.

* According to McCullough, Nick tried to bribe her at least twice — once during a lunch at Sizzler and the other time at a boy scouts meeting. She said Nick offered to match her regular council salary in exchange for her resignation from the council and threatened to “destroy” her if she didn’t take the offer.

* Councilman Dwight Robinson confirmed that Nick also tried to give him cash. However, he said Nick didn’t offer it again after Robinson explained that it’s illegal for council candidates to accept cash. Robinson said he accepted a check for his council campaign from Nick instead.

* During the course of reporting for this article, Nick offered to pay a Voice of OC reporter for stories about Lake Forest politics. “I’m not cheap,” Nick said. “I’ll compensate you for your time.”

* Nick himself claims he gave over $3,000 in unreported cash contributions to Voigts during Voigts’ 2010 bid for council. And he questioned whether it was a “quid-pro-quo” during an audio-recorded interview with Voice of OC. Voigts said Nick offered him cash but he never took it.

In 2011, Voigts was the only council member to vote in favor of overturning a liquor license for a 7-Eleven across the street from Nick’s ampm store. Voigts, who is wheelchair-bound and likes to drink beer, said he voted against the license because even he has easy access to a plethora of liquor stores in the city.

Nick has also openly suspected Voigts of wearing a wire as part of a sting orchestrated by the Orange County District Attorney’s office that ultimately failed to nail Nick on admitting to a bribe. Voigts denied the allegation, Nick said.

Update: The mayor confirmed in a phone interview after this article was published that he did in fact wear a wire during a meeting with Nick at the behest of the DA’s office. However, Voigts said, the operation failed because it occurred after Nick was charged for stealing campaign signs and Nick was suspicious about Voigts’ intentions.

“He offers cash to everybody,” Voigts said, alleging that Nick also attempted to give cash to Councilman Andrew Hamilton and former local GOP Chairman Scott Baugh. Asked whether the cash offers were campaign contributions or outright bribes, Voigts replied, “you want to interpret that? He offers people cash.”

When confronted with the various accusations, Nick for the most part confirms they are accurate. However, in almost every instance, he claims to have not realized that his actions were illegal.

Nick said he wanted McCullough off the council because she was “in over her head” and “an embarrassment to the process.”

He gave a similar explanation regarding the cash he claims to have given to Voigts.

“[Voigts] promised me to help me. And I’m not even sure if that promise was legit or, or legal, because now I understand there’s a concept, a quid-pro-quo,” Nick said. “About four years ago, I understood that that’s illegal, and you cannot, in fact you cannot do this.”

Nick’s place on the dais can be traced back to 2010, when the city requested the state make an exception to a regulation that limited the number of liquor licenses in a particular area so a 7-Eleven could sell alcohol across the street from his ampm store.

Nick saw the move as a grave injustice done to his business. Not only would the 7-Eleven siphon away sales, but the corporate chain had paid a paltry $100 for a new license from the state and city officials had approved the request in secret. Nick, on the other hand, said he purchased his license from a previous operator in the early 2000s for $250,000.

He initially saw his route to justice through the campaign coffers of sitting members of council, specifically Voigts and Robinson. During that campaign season Nick donated thousands of dollars to their campaigns. He said he was first introduced to city politics at a fundraiser for Voigts he attended with his friend Francis Akhavi, who would later be arrested on multiple counts of fraud.

By 2012, he decided to change his Persian name legally to Adam and run for council himself. He also filed a lawsuit, which ultimately failed, against City Hall to overturn the 7-Eleven liquor license.

As Nick was gearing up for his council run, two big developers — Trumark Cos. and Brookfield Homes — were in the midst of their own push for a controversial project to transform an aging auto mall into a housing development.

They needed to stack the candidate field with developer-friendly candidates, and Nick apparently fit the bill. So they funneled nearly $50,000 through the county Republican Party, among other PACs, to promote Nick and Robinson, another candidate they thought would be helpful to their cause.

The mailers also hit Nick’s opponent, longtime incumbent Marcia Rudolph, for using city-funded transportation. What the mailers didn’t point out is that Rudolph is disabled, legally blind and uses an electric scooter to get around. Rudolph lost the election.

Nick, meanwhile, was the top vote getter. And since, his obsession with winning has manifested itself in cash offers, a run-in with the law and numerous references to violence.

During last year’s election campaign, Nick was charged with stealing campaign signs, though the case was ultimately dismissed. At another point, according to McCullough (who is African American) and another council member, he also said that he wanted to “lynch” her.

And McCullough claims that Nick told her he wanted to kill then Councilman Peter Herzog with his own hands.

“[Nick] said that he hated [Herzog], he wished he was dead,” McCullough said. “The first thing he said was, ‘I would already have him dead. But I want to do it myself. I want to feel the life drain out of his body.’ And he took his hands, like he was strangling someone.”

McCullough is so terrified of Nick, she questions whether he’s an Islamic State “plant.” She said Nick was jailed for approximately a year in Iran and tortured – leaving burn scars on his hands – before escaping to the U.S. as a teenager.

Herzog, a longtime councilman who resigned in frustration with city politics in 2013, said, “nothing [Nick says] would surprise him.”

“If that’s true, that is obviously something that should never happen… and quite frankly, again if it’s true, that puts my family at risk, and that’s just unacceptable,” Herzog said.

Nick said he did make a comment about “hanging” somebody. But he said it had nothing to do with “blacks, or lynching, or civil war” and that the comment was taken out of context. Still, he admits he shouldn’t have said it.

He also acknowledged he was jailed in Iran and that authorities there burned his hands with cigarettes. He declined to speak much further about the circumstances of his departure from Iran, other than the fact that he wasn’t liked by the Khomeini regime.

Regarding his alleged comments aimed at Herzog, Nick says he never said he wanted Herzog “physically dead.” Politically dead, however, might be another story.

Still, he says with a hint of satisfaction, “I think I did kill him politically.”

Robinson, who ran for council on a team with Nick in 2012 but has since had a falling out with him, said that Nick has trouble letting go of issues that vex him, and it often becomes a long-running distraction.

“He’s very passionate, and sometimes to a fault. He doesn’t let go of issues very well,” Robinson said. “If there’s one thing he should try to do personally… just let things go.”

Councilman James Gardner blames Nick’s behavior on his Middle-Eastern heritage and a language barrier that leads to Nick making utterances that come off as offensive.

Gardner added that other council members engage in the same kind of acrimonious behavior, and that “they don’t have a cultural difference as an excuse.”

“He’s hot headed, like many [from the Middle East] are, those people have been killing each other for 5,000 years,” Gardner said. “You could say it’s part of his charm. That he’s passionate.”

Nick claims he’s nothing like his colleagues make him out to be. In fact, he says, he’s the polar opposite – a corruption fighter and warrior for transparency at City Hall.

During his tenure on council, he’s pushed for tighter campaign finance restrictions, banning council members from moonlighting as lobbyists and a government sunshine ordinance, among other proposals. He says they were all shot down by the council majority.

“There’s inherently something wrong when a company can make contributions to decision makers, and then be before those decision makers later for a decision,” Nick said. “And if somebody tells them that money doesn’t influence the decision, my answer is bullshit.”

However, he takes credit for offering much more information on the city’s website, including city employee compensation and travel reimbursements for council members. He says he also rejects the salary and benefits given to council members.

More than anything, Nick said the changes at City Hall, the new faces on council, and the altered policy on liquor licenses are all evidence that he has emerged victorious in his years-long battle with local government, despite his loss in court.

“I won. You know why? Because I’m a winner,” Nick said. “The scoreboard shows you who won the game… but not the fight… the fight is bigger than the game.