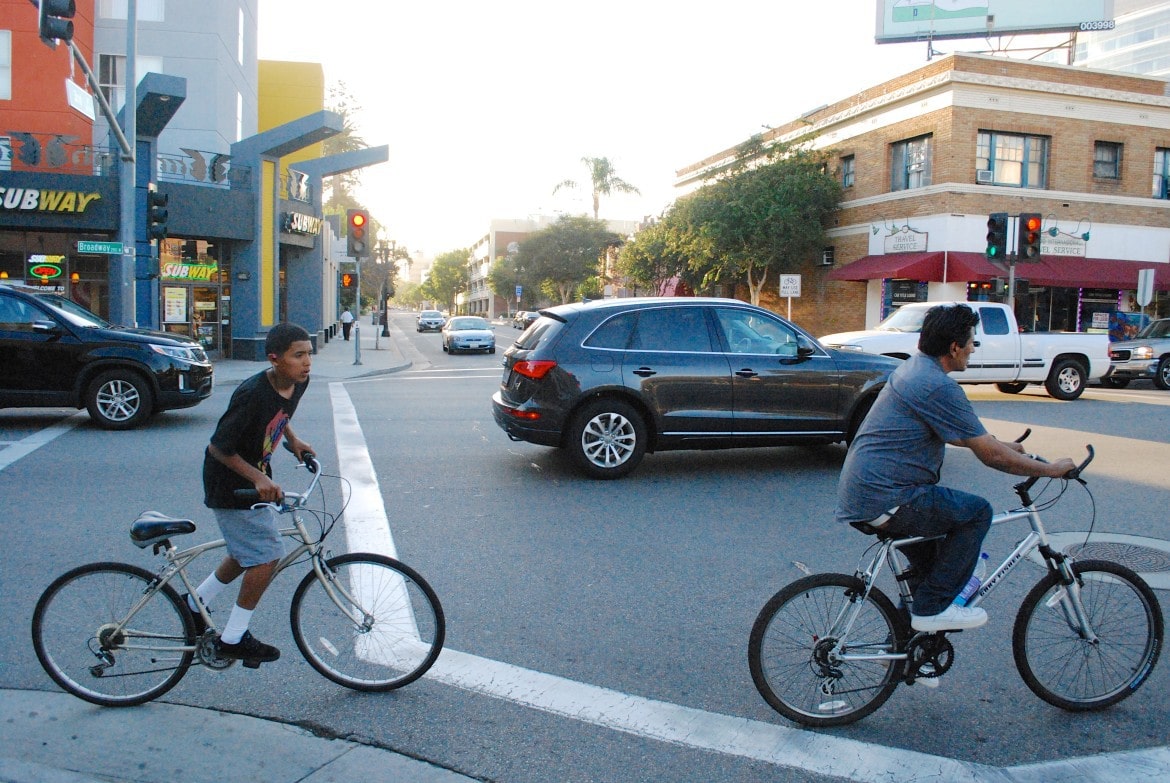 The streets of Downtown Santa Ana often host bicycle and car traffic at the same time, which can lead to serious injuries. City officials and local residents are collaborating on infrastructure aimed at making these trips safer.

At a community workshop Thursday, Stephen Patchan, a regional planner with the Southern California Association of Governments, noted Santa Ana’s success at getting millions of dollars in grant funding for projects by strongly including residents in the planning process

Statewide “what Santa Ana is doing is amazing – what you guys are doing here, and what [the city’s active transportation coordinator, Cory Wilkerson] is too modest to take credit for,” Patchan told about two dozen residents and other attendees at the event, which was organized by the Santa Ana Active Streets coalition.

“There’s more work to be done and more money to get, so keep at it,” he added.

Of 55 Orange County-based applications for statewide “active transportation” grant funding this year, all three that are recommended for funding – nearly $12 million in total – are Santa Ana projects.

One is a protected bikeway that would connect the city’s train station to the downtown Civic Center using Santa Ana Boulevard and 5th Street. Another is a “bicycle boulevard” in the Civic Center area, and the third is protected bike lanes on Edinger Avenue, from Bristol Street to the Santa Ana River Trail, an idea put together by local students.

Students at the nonprofit group KidWorks created the overall concept and proposal, including developing cost estimates, measuring the site and writing a grant proposal that is up for approval of $2.4 million by state officials later this month.

It was among Orange County’s highest-scoring projects.

Wilkerson also noted strong community input into a new city plan to improve bicycle and pedestrian transportation in downtown Santa Ana and connect the area with the city’s train station.

When the plan, called the Downtown Complete Streets Plan, was being developed, local youth were enthusiastic in their involvement and already knew a lot about infrastructure options, like the difference between buffered and protected bike lanes, he said.  Buffered lanes separate cyclists from cars through a marked buffer space on the pavement, while protected lanes have a physical separation.

Wilkerson said he was amazed.

“I met kids that were asking questions that most planners can’t answer,” he said.

The city is now seeking funding to make the downtown plan’s projects happen.  Two of them, the protected bikeway connecting the train station to the Civic Center and the Civic Center bicycle boulevard, are among those slated to go to before the California Transportation Commission later this month for state funding.

The praise comes as many cities across the country – as well as top California state officials –are promoting “active transportation,” or human-powered ways to travel, such as biking and walking.

The movement is spurred by policy goals like improving public health and air quality and reducing greenhouse gas emissions from cars, as well as effective advocacy approaches developed by cycling enthusiasts in cities like San Francisco.

In Orange County’s case, the region – like much of Southern California – was dominated by car-centric city planning as its suburban population exploded starting in the 1950s.

Very little attention, or dollars, were spent in past decade to make cycling a viable and safe option to get around town – particularly in central and northern Orange County.  That, in turn, contributed to countless deaths and injuries over the years.

But things started to change dramatically just a couple of years ago, when the active transportation movement began ramping up locally with support from officials like Santa Ana Councilwoman Michele Martinez.

Now, Santa Ana is on the leading edge locally of efforts to expand bicycle infrastructure.

At Thursday’s forum, active transportation coordinators for four key agencies at the local, regional and state level were on hand to talk about how residents can develop projects that come to fruition.

In Santa Ana, people can get involved with groups like Santa Ana Active Streets and work with city officials – Wilkerson in particular – to sketch out ideas and put together grant proposals, they said.

Those proposals are then submitted to regional and state – and potentially federal – agencies to compete for grant money.

In California, local cities now have a huge source to tap for funding, with the state’s Active Transportation Program offering millions of dollars in potential grants.

The state is offering about $120 million this year in such funding, with cities applying through Caltrans and final approval of projects by the state’s transportation commission.

Another $12 million in such funding is available specifically to Orange County this year through the Southern California Association of Governments.  For that money, Orange County Transportation Authority officials have some impact on which projects get funded.

Another potential funding source is federal agencies.  Based on its complete streets plan, Santa Ana is currently building bicycle infrastructure on 3rd Street in its downtown and using public health grant funds from the U.S. Centers for Disease Control and Prevention.

As part of that project, the city recently painted bright green rectangles on the street with bicycle symbols, as well as street signs, a reminder to motorists they’re sharing the road with cyclists, and to educate cyclists they should use the full lane. 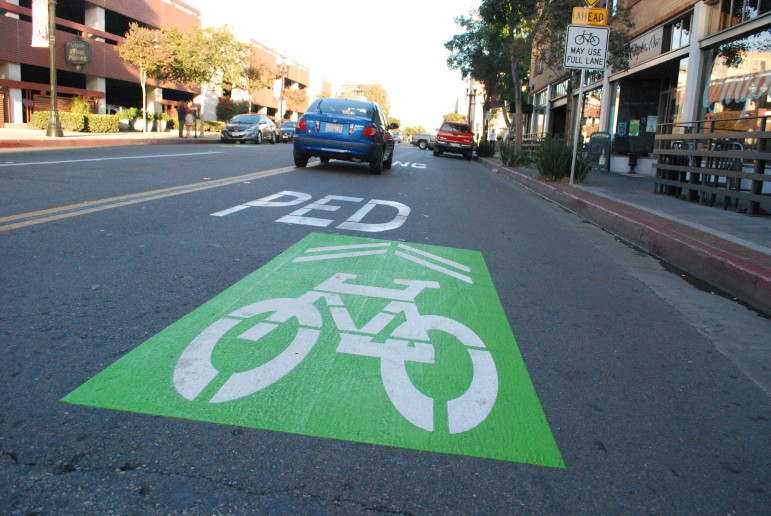 Experts say when there’s a lack of protected bikeways, the safest place for cyclists to ride is in the middle of street lanes, with the flow of traffic, and following the rules of the road as if they’re a car.

In the project’s second and third years, bike medians and traffic circles are envisioned to be added.

The rollout is still in its infancy, with one resident noting lots of cyclists and drivers are unsure how to react to the green strips.

Based on other cities’ experiences, that should get better with time as more and more people use it, Wilkerson said.

As for broader policies on bike safety, one resident’s suggestion – to include questions about safe driving around cyclists on the California driver’s test – sparked interest among the officials.

“That is a wonderful idea,” said Marlon Regisford, a bicycle and pedestrian coordinator at Caltrans.  “That’s something I’m gonna take with me and promote” within Caltrans.

Paul Martin, the active transportation coordinator for the Orange County Transportation Authority, said his agency might be able to write a support letter to help build momentum.

Another resident asked whether a bike share program could be implemented in Santa Ana.

Wilkerson said that once the infrastructure is in place to help make cyclists feel safe, a bike share program would probably work.

Amazing things can happen “when people really put their mind to it,” he said.