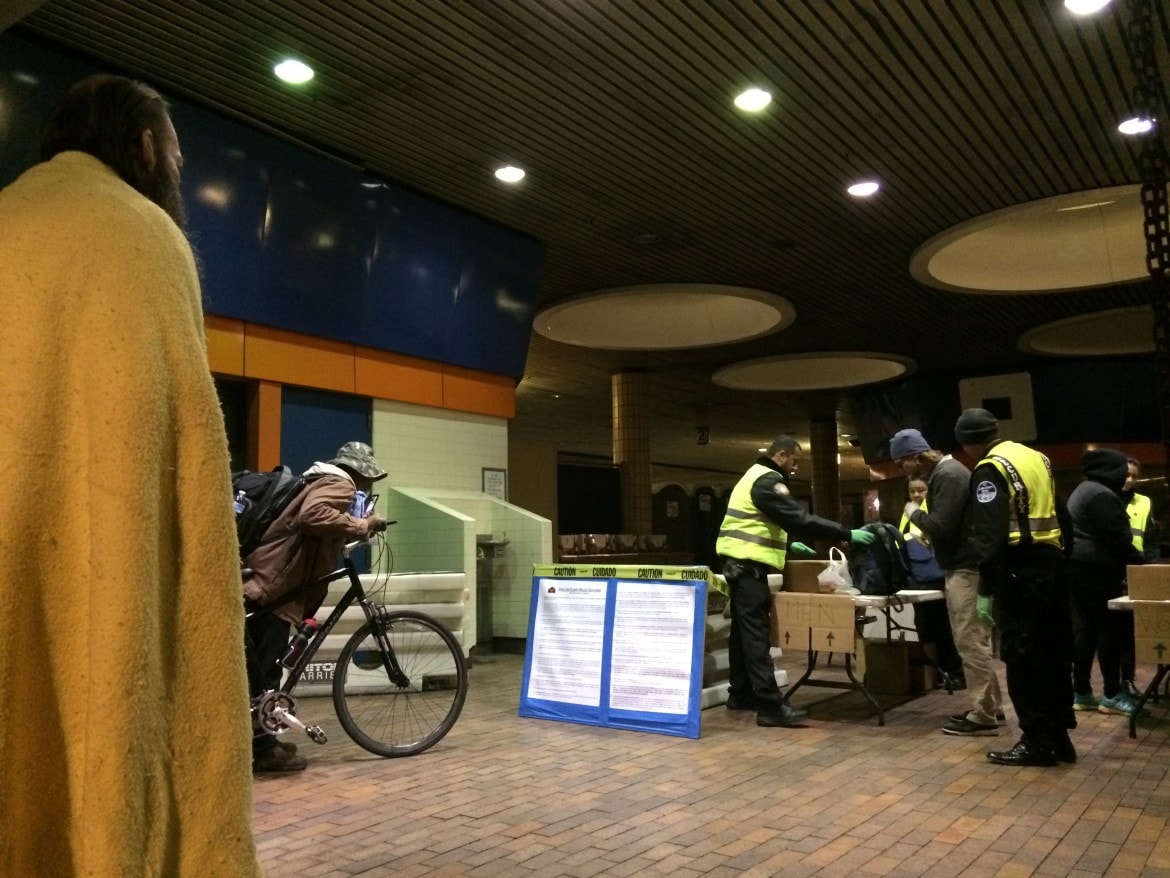 Security guards search Tory Mitchell's belongings as he prepares to enter the empty Civic Center bus terminal, which was turned into an emergency shelter from this weekend's El Niño rainstorm.

Orange County officials have long been derided for keeping shuttered a large Civic Center bus terminal right in the heart of a homeless encampment that in recent years has swelled in size to include hundreds of people.

But when the terminal opened this weekend as an emergency shelter from the El Niño rainstorms, it attracted only a handful of people. The vast majority of homeless residents of the Civic Center decided to stay huddled in their tents and beneath the doorways of government buildings.

One man who walked by the entrance of the bus terminal turned around when he saw the gauntlet of security guards searching anybody who enters.

“There’s like six cops in there. I’m not going in,” he said before passing by.

The Civic Center encampment — and homelessness in general — has perplexed county officials. It took years to find a suitable location for the county’s first year-round shelter, a search that was complicated by strong backlash from residents and businesses nearby proposed sites. And now the El Nino rains have presented yet another crisis.

For the dozen or so people who decided to brave the security at the entrance, the shelter was a welcome relief. Inside workers for the nonprofit Mercy House, which operated the emergency shelter, handed out oranges, crackers, Top Ramen and coffee.

People inside the shelter who were interviewed by Voice of OC described it as better than staying at the Fullerton armory, which they said was overcrowded.

“This is so cool,” said Tory Mitchell, an ex-convict who was recently released from prison. “Maybe if the word gets out that we like it better than the armory, they’ll keep it open.”

Before the terminal opened Saturday night, Smitty, a well known Civic Center homeless man and advocate, rode by on his bicycle for an inspection.

He doubted that many would use the shelter because of the rules. He also said homeless people would be concerned that they could only bring in as much stuff as they could carry, which he said isn’t a feasible option for people with makeshift homes at the Civic Center.

No drugs, alcohol or weapons were allowed, and those who entered had to agree to be searched. Occupants could smoke but only in a small designated area. Medical marijuana was allowed, but only with a valid doctor’s recommendation. The amount had to be less than eight ounces.

And given that the terminal is essentially a vast open air facility with a roof, Smitty said most people there would rather sleep under a doorway.

“Being here you’re giving up a whole lot of freedoms for a bed or a mat,” Smitty said. “It’s too structured… I’ve been behind bars in prison, and this reminds me too much of that.”

Still, he said he was glad it was open for others and hoped it would remain open continuously.

Mercy House Executive Director Larry Haynes was on scene to oversee the terminal’s opening. He said Mercy House officials would be taking input from occupants on how to improve the operation.

Haynes also said Mercy House was given less than 48 hours to setup the operation. The county waited until last week to submit plans to the Federal Transit Administration, which sign off on all proposed uses of the terminal. The FTA approved the use two days after the application was submitted on Jan. 25.