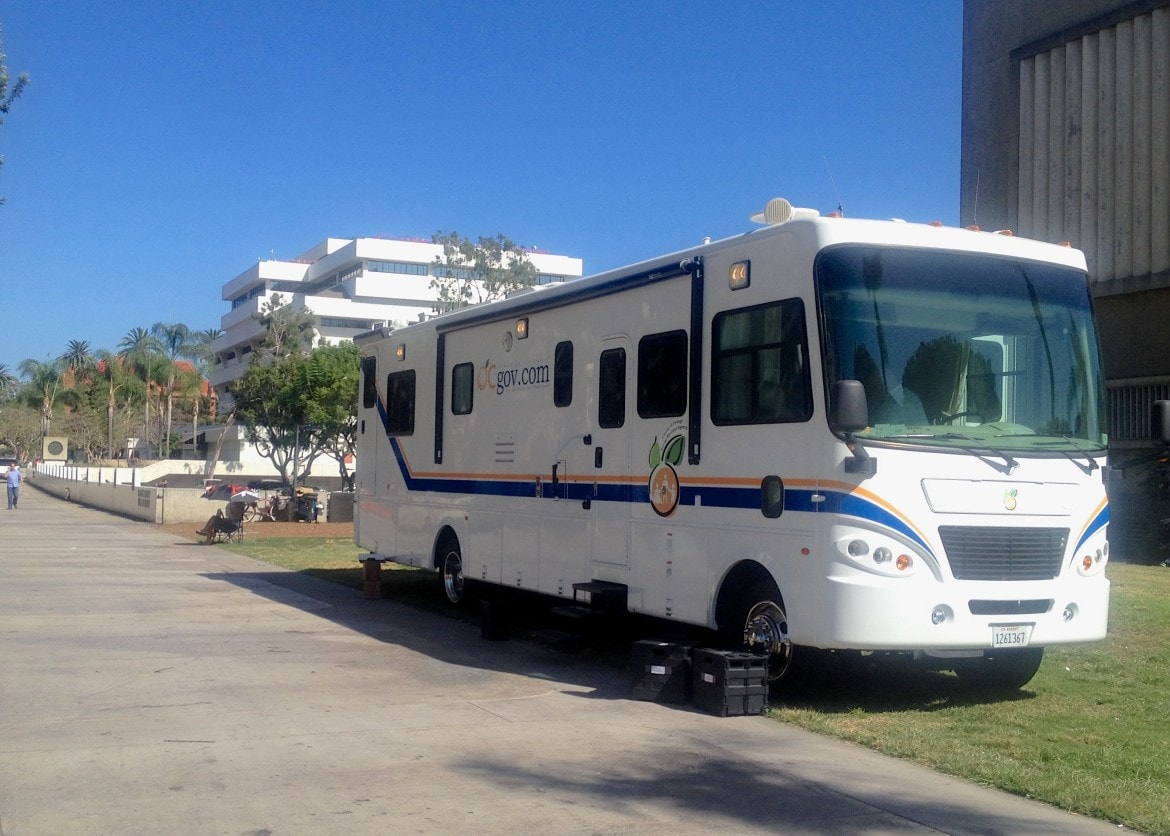 For the first time in a long while, the public dialogue with Orange County Supervisors on homelessness has a different tone.

Whenever it rains now, any one of the 500 homeless people living at the county Civic Center can easily walk over a few hundred yards to a comfortable covered shelter at the former Santa Ana Transit Terminal building on the corner of Civic Center Drive and Ross St. in downtown Santa Ana.

During our most recent storms, County Supervisors’ Chairwoman Lisa Bartlett reported that nearly 100 people came into the facility – currently administered by Mercy House – adding that services are steadily improving.

The county even listened to my son, Maximo’s idea for getting heating lamps at the $3.2 million abandoned transit terminal they bought (my suggestion last June) from OCTA last December to ensure some sort of shelter during this year’s rain storms for the homelessness epidemic at our county Civic Center.

During the last rainstorm, I also noticed a series of temporary tarps up at the facility and it also seems that bathroom upgrades are already underway. There’s even talk of some sort of approach to temporary storage.

It’s a stark difference from when I lashed out at county executives during the storms in December, when the very same people I warned about last summer were getting wet.

Escrow should be closing soon on the property, allowing for a deeper assessment of what kinds of rapid response services the transit terminal could offer to the chronically homeless living at the Civic Center.

There’s also progress on a full-time homeless shelter in Anaheim – thanks to Supervisor Todd Spitzer. And this last week, Spitzer also seemed to underscore a commitment that the county’s cold weather armory shelter system wouldn’t be abandoned until there’s a comprehensive strategy in place.

For the first time in the decade that I’ve covered the Orange County Board of Supervisors, our current board has actually stepped up to the plate and offered what seems to be unanimous direction to county executives to develop an actual approach to homelessness.

From what I can tell, County CEO Frank Kim also seems to be giving his executive team the right kind of direction — get busy and creative on homelessness.

Orange County Employees Association General Manager Jennifer Muir also has come out strong on the issue, arguing publicly in an OC Register Column that addressing the homeless situation at the civic center is not only a humanitarian priority but also a workplace safety issue for county workers.

Supervisors soon should also be getting a healthy diet of options on homelessness policy from Kim’s executives – like what to do with the bus shelter site.

Kim also recently announced that the county is in the final stages of hiring a new County Homelessness Services Coordinator – a six-figure executive whose job is to connect applicable clients with county services to address the explosion of homelessness at the Civic Center and throughout the county.

The almost simultaneous retirement of Karen Roper from OC Community Services this month is as close as you get to a public admission from county supervisors that their current policy was a shipwreck, a total failure.

Clear direction from county supervisors, along with some energy and vision from the executives, is what’s really needed.

Look at what happened when we needed the Federal Transit Administration to sign off on temporarily using the terminal for homeless during recent storms.

Every official I talked to kept telling me, which I wrote in my columns, that FTA was impossible to move. It would take forever, they said.

Yet the more we all engaged county supervisors, and in turn our well-paid legion of legislative staffers at the county and OCTA, guess what?

We finally got action.

I recently ran into Congresswoman Loretta Sanchez (who was one of the officials I called myself on the FTA issue) at the Great American Write-In and she underscored how important all our pressure was back in December with officials in Washington, D.C.

Sanchez, who directly engaged her own legislative staffers on the issue immediately after we spoke on cell, told me she believed county legislative efforts were stalled until I called her.

She told me given her experience in Washington, D.C., her office was able to effectively engage with FTA – getting what some thought undoable, done within days.

Yet Sanchez – who is running for U.S. Senate – underscored that public opinion is what moves bureaucracy. It’s the tide of American politics, she told the crowd of petitioners earlier this month at the Write-In at Santa Ana’s Delhi Center.

We have to keep our elected officials focused. It’s up to us to keep them engaged. To let them know we expect the best, that’s what we’ve paid for as taxpayers.

Homelessness is solvable. Other cities across America have done it.

The new county’s new homelessness executive – thanks to the efforts of Supervisor Andrew Do – will have the mandate of cutting across many departments, mainly the Social Services Agency and Health Care Agency with the sole aim of getting services to homeless populations throughout the county.

In many ways, it’s a welcome entrepreneurial approach toward homelessness.

For once, when it comes to the question of homelessness responses, there will be someone that can sit at the front dais like the director of real estate services, HR, government affairs, finance…someone inside the CEO’s office that can offer a biweekly check-in to the public.

Someone who can answer questions, be held accountable without falling apart at the public dais.

This last week, Bartlett and Do also chaired an important hearing last Friday to take a frank look at the county’s weak approach toward mental health, which is costing taxpayers and families dearly every day.

Credit Bartlett and Do for their willingness to tackle complex issues such as mental health that come with incredibly difficult financial challenges for a donor county in Sacramento like Orange County.

When it comes to the downtown Santa Ana Civic Center homelessness hub, we must not forget that time is short.

Soon, a mushroom cloud of dust and debris will envelop the area now occupied by the homeless at the civic center, which will likely scatter the small tent village that has popped up in its midst.

Supervisor Shawn Nelson – who himself was the first to really start focusing county supervisors on homelessness with unsuccessful attempts to site a shelter in Fullerton and Santa Ana during his chairmanship a few years ago – last week publicly warned Santa Ana city officials that the wave is potentially headed their way.

Now, if Orange County’s all-Republican Board of Supervisors has a sad record on homelessness in past years, their low marks are only surpassed by their all-Democratic, supposedly progressive, colleagues on the neighboring Santa Ana City Council.

They run half the county Civic Center in downtown Santa Ana through a longstanding joint powers authority.

Yet they seem to be a total zero on one of the biggest issues impacting their own downtown.

Council members were supposedly working to establish a check-in center for the homeless more than a year ago. And even though their own local library has turned into a defacto homeless shelter – seriously impacting the children of Santa Ana who need the library to study – council members seem to be a no-show on the issue.

Nelson publicly called out Santa Ana council members at the last county supervisors meeting as absolute failures and total politicians on the issue, arguing they have contributed virtually nothing – other than to play politics – to the human drama playing out on their doorstep.

Maybe Nelson is just being a good team player and throwing a nice lead block for his buddy Republican, Do, who is running for office against a field that includes Democratic Councilwoman Michelle Martinez in November.

Either way, homelessness has been placed front and center like never before in Orange County.

And the coming combination of civic center bulldozers and the politics of the 2016 election are likely to produce an interesting spin-off.