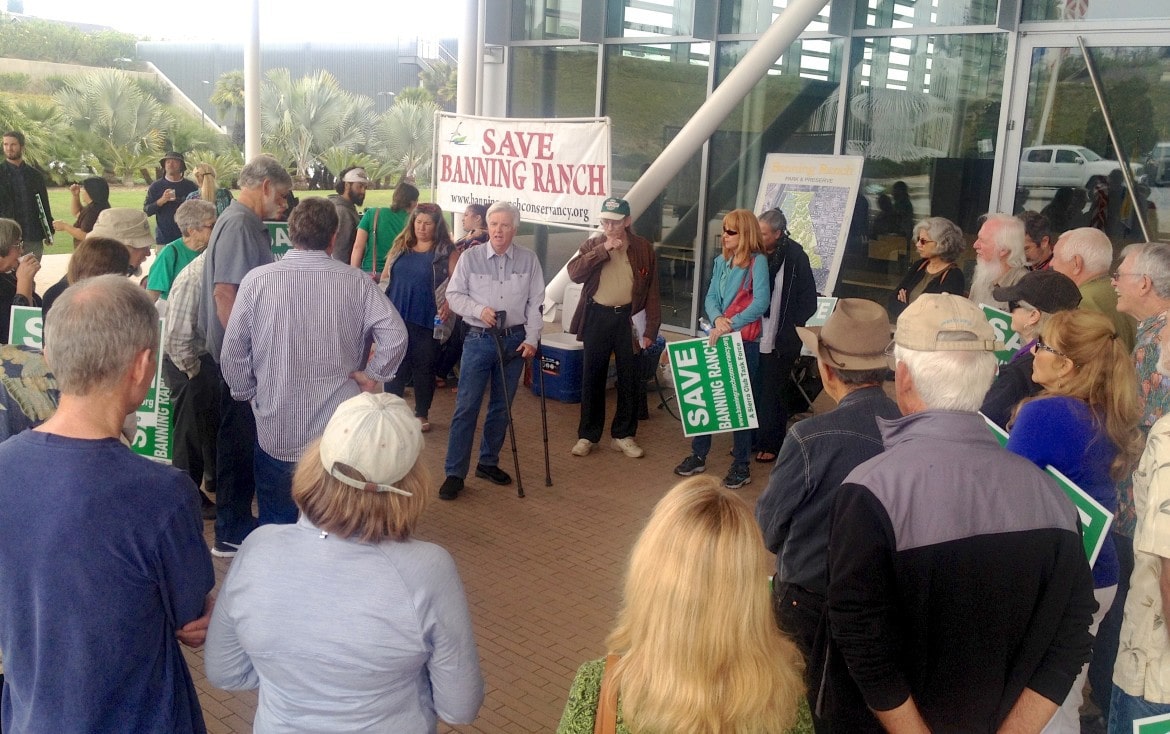 Opponents of the Banning Ranch project gather outside the Coastal Commission meeting Thursday.

The battle over whether to build hundreds of homes on Orange County’s largest piece of unprotected coastal open space raged on Thursday, with dozens of residents flooding a California Coastal Commission meeting to protest the Banning Ranch development.

Carrying green signs with “Save Banning Ranch,” speakers told commissioners of the property’s key role in providing habitat for endangered wildlife, and harshly criticized a lack of consultation with native nations whose ancestors’ remains could be unearthed by the development.

Angela Mooney D’Arcy, executive director of Sacred Places Institute for Indigenous Peoples, said the land was shared between the Tongva and Acjachemen (ah-HA-sha-men) tribes, and that the commission’s proposed rules for the project call for excavating and testing the remains of people she’s descendent from.

“Under no circumstances for tribal nations is that an acceptable mitigation measure,” Mooney D’Arcy said during the meeting at Newport Beach City Hall.

“They really do need to go back to the drawing board and consult” with native nations, she said, adding that state agencies are required under an order from Gov. Jerry Brown to encourage input from tribal governments on issues that affect tribal communities.

In response to Mooney D’Arcy’s comments, Commissioner Effie Turnbull Sanders asked staff to prepare a report on the issue.

“I think our agency really does need to develop some more definitive tribal consultation procedures,” said Jack Ainsworth, the commission’s interim executive director. “I think we do need to do better on this front.”

The exchange recalled several discoveries in the 1990s and 2000s of human remains dating back thousands of years at the Bolsa Chica wetlands in Huntington Beach, during grading for home developments. There were concerns that an ancient burial ground was destroyed, and a developer was later fined $430,000 for digging in an unauthorized area near where tribal remains were found.

The Coastal Commission, which will decide on whether to allow 895 homes, 45,000 square feet of retail space and a hotel to be built on the Banning Ranch property, had been scheduled to vote on the project Thursday.

But the commission postponed the agenda item, which likely means the decision will be pushed to its September meeting, according to Steve Ray, executive director of the Banning Ranch Conservancy. The Conservancy opposes the project and wants to purchase the land and protect it as natural open space.

Yet that September meeting was scheduled for Humboldt County, a more than 11-hour drive from Orange County. Amid public outcry, the commission directed that the September hearing instead be held close to the project area. The location might be Long Beach.

Representatives of the Banning Ranch developer team didn’t speak at Thursday’s meeting, but in the past have said that most of the land would be set aside as natural open space, with the home development helping finance cleanup of old oil operations on the site. The development team’s website for the project says it’s good for the ecosystem, the planet, and “tree huggers.”

Other speakers on Thursday criticized the commission for apparently pressuring the agency’s scientists to significantly scale back their map of environmentally sensitive habitat, which more than doubles the area allowed for development, to 55 acres.

Bruce Bartram, a former city prosecutor in Anaheim, noted that in October, when the commission’s staff recommended that the project be rejected, commissioners told staff to work with the developer to come up with a workable development. Since then, the commission fired its executive director, Charles Lester, and top staff are now recommending the project’s approval.

Bartram said commissioners had performed “evidence tampering” by pressuring staff to change their analysis, something he would have been fired for as a prosecutor.