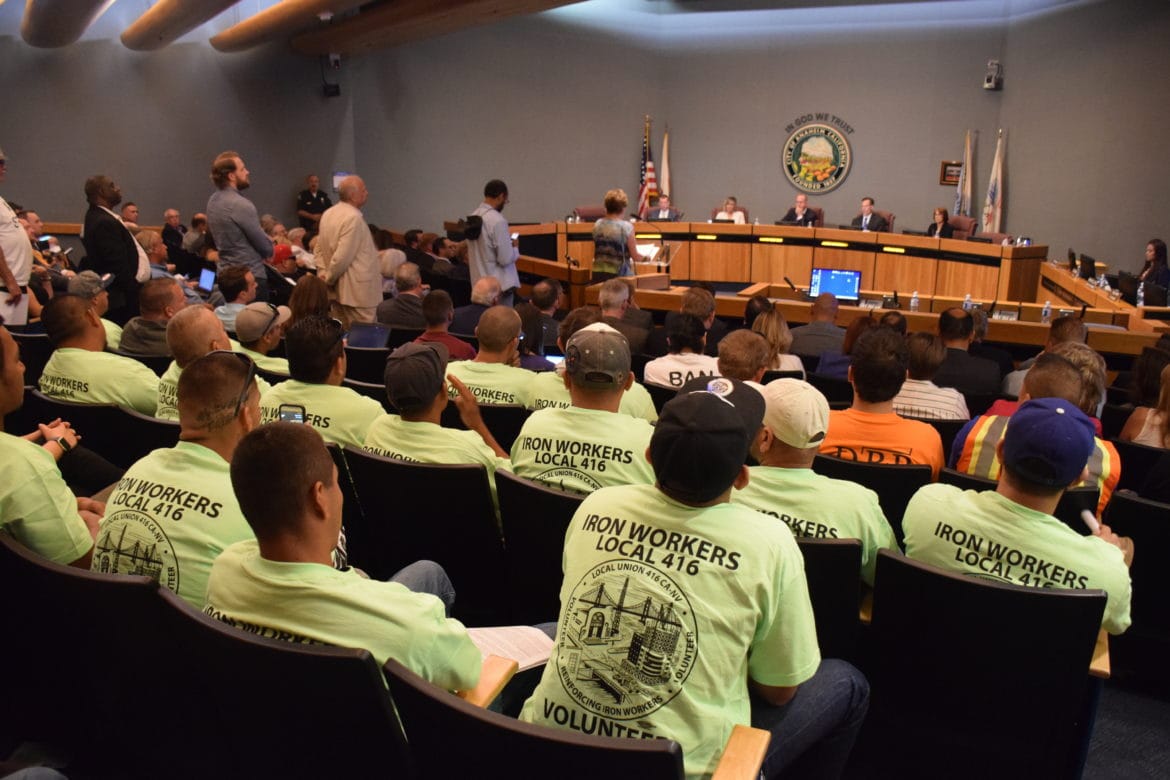 The audience at a the Anaheim City Council meeting in which council members approved more than $500 million in hotel subsidies.

In a move that adds to longstanding tensions between Anaheim’s resort industry and neighborhood advocates, the City Council late Tuesday night voted to approve tax subsidy deals for luxury hotel developers that could end up being worth more than a half-billion dollars.

The subsidy for a four-diamond hotel proposed by Disneyland has the potential to be worth more than $200 million over two decades, which would make it the richest tax giveaway in the city’s history. In addition, subsidies for two hotel projects bankrolled by the multinational developer Wincome Group could be worth as much as $300 million.

Council members — in front of a crowd of both subsidy supporters and detractors — voted 3-1 to approve the deals. Councilwomen Kris Murray and Lucille Kring, and Councilman Jordan Brandman voted in favor, while Councilman James Vanderbilt was opposed. Mayor Tom Tait, a vocal opponent of subsidy deals, had to jet off for a meeting among mayors at the White House before the vote was taken.

With the council chambers filled to capacity, residents waited in the spillover room or outside City Hall. Many left without speaking after waiting for hours.

The companies applied for the subsidies under the city’s hotel incentive program, which allows builders of hotels that receive a four-diamond rating from AAA to collect 70 percent of the room taxes generated by their projects during their first 20 years of operation. After that period, the city would begin to receive 100 percent of bed taxes. Also, any hotelier who upgrades a hotel to four-diamond status gets a 50-percent rebate on bed taxes on that hotel for 20 years.

Subsidy opponents say the program results in unnecessary giveaways of taxpayer dollars that could either be saved or spent on city services that improve neighborhoods.

“These deals would be built without the subsidy…We didn’t even ask them if they need the money and we’re giving it to them,” Tait said before he left. “If we approve it, this is a straight on gift of $550 million from our general fund.”

Proponents of the deal say building a four-diamond hotel would be unfeasible without assistance, and that the deal opens up revenue streams and job opportunities that the city would not have if the projects don’t go forward.

“Disney is by far, exponentially, the highest taxpayer in this city. It has been a windfall for Orange County and the region,” said Councilwoman Kris Murray, during an impassioned speech defending both Disney and the tax breaks. “For sixty years they’ve been an extraordinary partner…and the alternative is going into the wallets of our residents, many who are low income.”

Disneyland’s proposal calls for a 700-room, 900,000-square-foot hotel to be built on what is currently a parking lot adjacent to the resort. It claims that the hotel would generate nearly $300 million in room tax revenue over twenty years, $205.8 million which would go back to Disney. 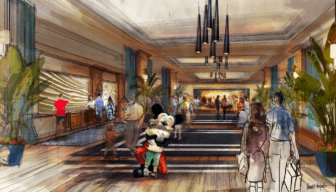 An artists rendering of the proposed Disneyland hotel.

Two local affiliates of Hong Kong-based Wincome Group submitted proposals for hotels that would be situated within the city’s resort district.

The owner of the existing Anabella Hotel on Katella Street plans to bulldoze the existing boutique hotel and acquire a 1.87-acre city property to build an eight story, 634-room luxury hotel.

A second proposal by Goodhope International for a 580-room hotel would be built on the southeast corner of the intersection of Harbor Boulevard and Disney Way.

The developers of all three hotels projects will pay a $100,000 “public benefit” fee toward public improvements around the hotel sites. And at the end of each fiscal year, they will receive a check from the city worth 70-percent of the bed taxes generated by their hotel.

Many subsidy proponents argued that it’s unfair to describe the deals as subsidies because it makes it seem like existing general-fund dollars are being handed out to corporations.

“I’m frustrated when people say its giving away money. It’s money that has not been generated that is not in the general fund,” said Jill Kanzler of Support Our Anaheim Resort (SOAR), a political action committee that has campaigned heavily in support of the hotel incentive program.

Both the city’s police and fire unions also support the tax breaks, pointing to new revenue for public safety during a time when many agencies are reporting rising crime rates.

“I truly believe if it wasn’t for the revenue Anaheim receives from tourism and the resort area, Anaheim would be similar to Stanton,” said resident Jim Adams.

The hotel projects by Wincome were also praised by the county Democratic Party, several elected officials and councilman Jordan Brandman for including project labor agreements that promise to use union labor for construction and prioritize local residents and veterans for hiring.

Disneyland has also agreed to use union labor, including a deal with UNITE-HERE Local 11, which represents hotel workers.

UNITE-HERE, however, said they would not support the subsidies for Wincome because the company has not agreed to use unionized hotel workers, although the union did not contact the company until last week.

Luis Aleman, a member of the Teamsters local 166 and whose father was a union member, said he sympathized with the struggle of union households to find jobs, but saw the hotel deals as ultimately unfair to residents.

“We are saying, if you give the Disney corporation $200 million plus you’ll get a project – I think that’s cruel. You’re trying to rationalize the subsidy by promising the carrot,” Aleman said.  “Anaheim has to be able to invest in their citizens, not just when a big company needs it.”

Tait gave a detailed presentation that rebuked talking points put out by SOAR, calling them “intentionally misleading at best.”

Tait also argued that building one or two three-diamond hotels with no subsidy, rather than one subsidized four-diamond hotel, would generate a better return for taxpayers over 20 years given the significant tax rebate.

“This is a thriving hotel market – the best in decades. We saw how many hotels are going to be built with no subsidy. All a sudden they would stop?” Tait said. 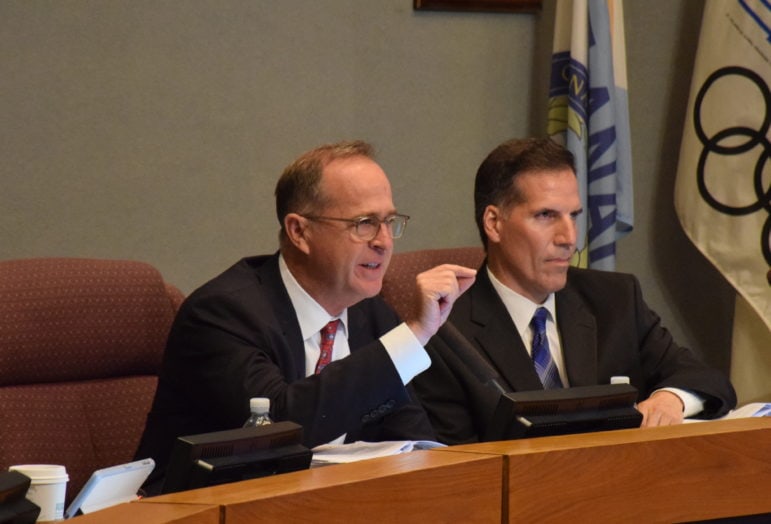 Tait, Vanderbilt, and others also questioned whether the new rooms provided by the three luxury hotels would end up creating a glut in the overall market.

Assistant City Manager Kristine Ridge said ahead of a 2013 council vote to give a $158-million subsidy for two four-diamond hotels near the GardenWalk mall, the city did an analysis that found the resort area has 2,000 existing four-diamond rooms and that adding an additional 500 rooms would create a market able to sustain four-diamond hotels without subsidies.

The first of the GardenWalk hotels, a planned JW Marriott, would add another 466 rooms and thus meet the projected capacity, leading Vanderbilt to speculate that “we could have saturated that four-diamond capacity.” Subsidies for a second hotel near GardenWalk was approved by the council, although so far there are no concrete plans.

“I believe that if [the GardenWalk] hotels are built we will have accomplished what we intended to do under the policy,” said Belmer.

Murray gave her own presentation in defense of the tax breaks, where she cited examples of cities across the state that have multiple four-diamond hotels as well as generous tax breaks for developers.

Los Angeles, for example, has 13 four-diamond hotels and gives developers in the downtown area a 50 percent sales, hotel, property and utility tax break for 25 years. 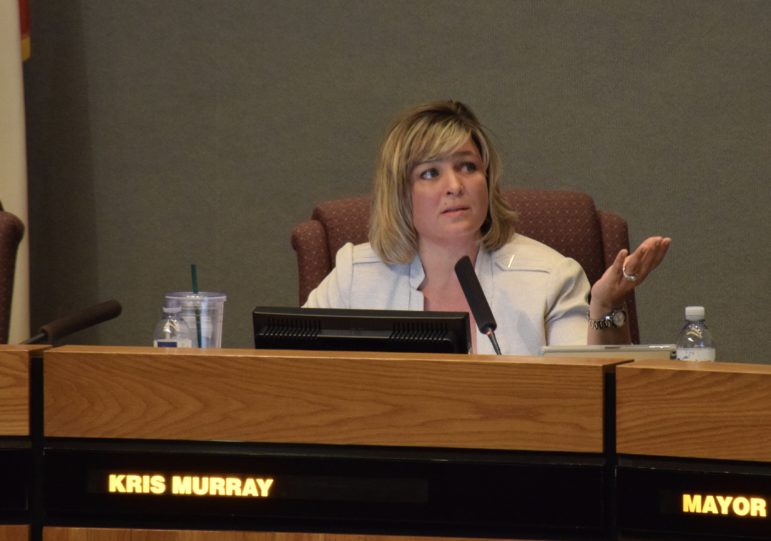 Murray pointed to five other cities in the county that have or are considering sales tax increases. The Anaheim resort district, especially Disney, has given the city the unusual ability to avoid taxing citizens for services through hotel bed taxes, Murray said.

“Five cities in Orange County are looking at sales tax increase, a regressive tax to fund services and we don’t even have to consider it because of our resort,” said Murray. “[We] have this incredible investment and tsunami of future revenue that will ensure a sustainable budget that is far more recession-proof.”

“Anaheim competes for investment. That is why we have not seen a four-star built here in fifteen years,” said Kring. “Disneyland Hotel was awarded a four diamond rating after massive renovations, so we’ve had to work to entice four diamond hotels.”

Tait left the meeting at 9:45 p.m. to catch an overnight flight to Washington, after he was called by the White House Monday to attend a last-minute summit about re-building public trust with law enforcement.

After nearly five hours of public comment and presentations, Tait requested the council continue the action to their next council meeting, but that vote failed 3-2, with Tait and Vanderbilt voting for the continuance.

The three votes went forward without the mayor, with Vanderbilt approving the projects but opposing the tax breaks for each project.