Although the OCDA agrees with the DCA’s ruling, the OCDA maintains that there has never been “blanket papering” of any judicial officer. Any exercise of preemptory challenge made by any member of the OCDA has been the individual prosecutor’s decision to do what is in the best interest of the People, public safety, and crime victims.

The published opinion in its entirety can be found at http://www.courts.ca.gov/4dca.htm. To read the People’s March 25, 2016 reply, please visit www.orangecountyda.org and select, “People v. Rito Tejeda Formal Reply,” in Reports under the Reports pull- down menu.

The California Code of Civil Procedures section 170.6 gives every party the right to exercise a single peremptory challenge against any judge that litigant believes, in good faith, is prejudiced against him or her or his or her case. The authority conveyed by section 170.6 is a substantial right that is part of our system of due process and exists to ensure fair and impartial trials. The law does not require any party to explain their reasons for peremptorily challenging a judge, nor may a court inquire into those reasons. It requires only that the party have a good faith belief that prejudice exists.

In January 2016, the OCDA conducted research into how 170.6 challenges were exercised countywide between Feb. 24, 2014, and Dec. 3, 2015, the same period of time examined by Judge King in denying the People’s 170.6 motions. The variables included what judges were challenged, what party filed the challenge – an OCDA prosecutor, a criminal defense attorney, or other, what specific attorney filed the challenge, whether the challenge was granted or denied, and what was the principal felony or misdemeanor count in the underlying case. The limitations included basing the research on electronically-filed cases only and excluded civil cases, challenges filed that were then withdrawn, and cases that were not captured due to computer error.

It was found that a total of 847 challenges were filed against superior court judges in the time frame that was under review. Of the 847 peremptory challenges, most were filed by criminal defense attorneys, 501, which may consist of public, alternate, associate defenders, and private attorneys both retained and appointed. In contrast, OCDA prosecutors filed 340. The Anaheim City Attorney filed five and a victim filed one. 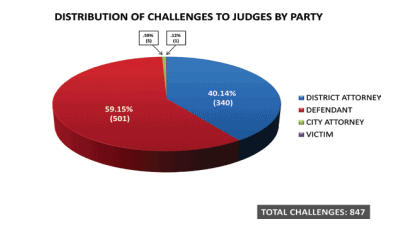