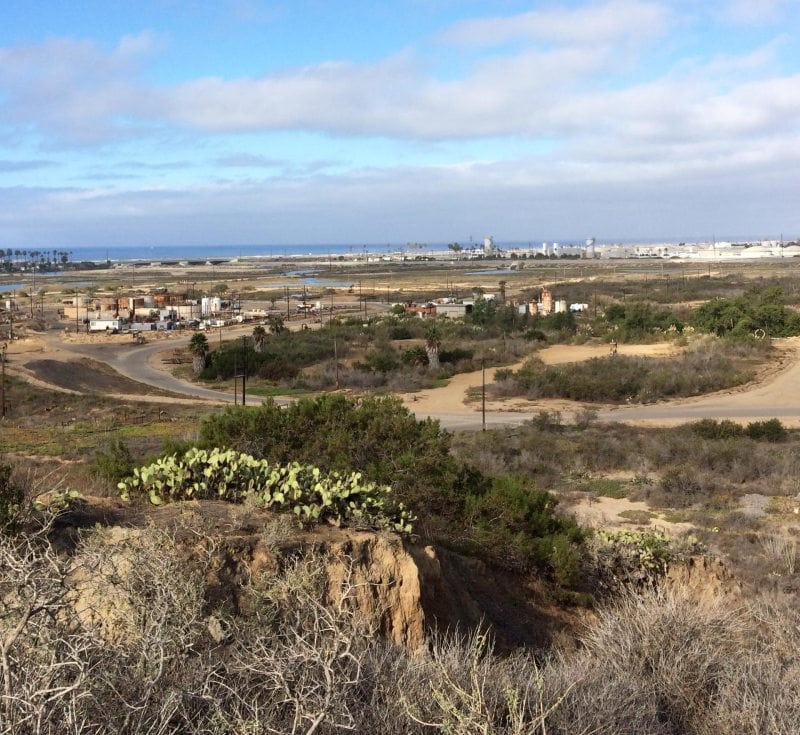 The California Coastal Commission, after thirteen hours of testimony and deliberations, denied Newport Banning Ranch LLC (NBR) their bid to create a mega-resort and residential village on a present/former oilfield overgrown with state protected Environmentally Sensitive Habitat populated by rare or endangered wildlife.

What went wrong for NBR?

First of all, we must end our dependence on fossil fuels and discontinue the sacrifice of ecologically important coastal bluffs, arroyos, and wetlands to our destructive addiction. Partly run by an oil company, NBR remains unaccountably responsible for decades of blight and pollution onsite. They have proposed to drill almost 100 more wells, just adjacent to the marshland areas they promise will be donated for use by birds, bees, and people. They also threaten to further shirk requirements by state and federal agencies to clean up the former wells unless we let them plough under Purple Needlegrass Grassland and rare Coastal Sage Scrub.

Moreover, we must discontinue channelizing, damming, diverting, and encasing in concrete our rivers. Here we have the mighty Santa Ana, the generator of life for the wild chaparral, what were once an important series of regional villages of Tongva and Acjachemen Native American Nations. Today, Orange County agencies do not consider it a river, but a flood channel and water source. This must change.

As well, we can no longer cover our remaining coastal bluffs and wetlands with luxury estate homes, ocean view condominiums and posh resorts. The 895 homes, with two hotels and a slew of posh restaurants and shops proved too much even for this development-friendly Commission. Keep in mind, this 401 acres is the last privately owned coastal open space left on the South Coast. NBR must this time make a good faith effort to work with the community, all Native Nations, and environmentalists. How, they might be asking?

Using Regenerative Design to Create Again Rather Than Destroy

Okay, how about rethinking the plan using Regenerative Design? It asserts that human development can systematically work with nature to restore sensitive native habitat by understanding the site’s energy and water cycles. Using Regenerative principles, Banning Ranch constitutes an opportunity to not only preserve a portion of Coastal California landscape and a Native sacred site, but to actualize a development that works in partnership with nature and its many stakeholders, to encourage all species, humans included, to thrive. And rest assured, this is a for-profit idea that will continue to pay dividends for the developers, the community, and governmental entities involved.

So, how would that work?

Let’s again consider that Banning Ranch lies at the mouth of the channelized 110-mile river Santa Ana River, which drains a watershed that includes 3,200 square miles with 5 million inhabitants in three counties. The 401-acre site with a documented preeminent hydrologic, biologic and ecosystemic role is effectively its estuary/delta, where silt and debris form wetlands where plants and animals thrive, that purifies water runoff to the ocean and replenishes beaches with sand. Channelization has obliterated this once-functioning delta/estuary. Without this resource functioning, saltwater intrusion into freshwater aquifers has become rampant.

Have you noticed what’s happening to the Los Angeles River? Federal Army Corps, cities, community groups and land developers are moving fast on a $1.3 billion series of proposals through Northeast LA and Downtown, and more improvements are happening in the Valley and downriver all the way to Long Beach. Plans include breaking down the concrete and opening up the flow of water and silt to reinvigorate the ecosystem, and create open space and recreational areas, with complementary development plans underway.

NBR, along with surrounding cities, the county, and the Army Corps of Engineers must take note: Any proposal for development of this land must include a cogent plan for rehabilitation and restoration of functioning ecologic services inherent in such a keystone parcel.

Look, Newport Banning Ranch needs to get real about clean up and remediation of the land where necessary, while protecting the wildlife that thrives in between the oil rigs, pipes and eroded dirt paths. Twenty acres as recommended by Coastal Commission staff for a residential/resort development may not sound like much, but how about NBR consider the plan a 401-acre resort within a Nature Preserve and Estuary/Marshlands Revitalization Project?

Take a page out of the original vision of the Sea Ranch in Sonoma County. Proposed in the 1960s, the ensuing battle for coastal access gave rise to the legislation that formed the Coastal Commission. The creation sought to assimilate with the elements, rather than confront them, codifying a covenant with nature. Architect Charles Moore called the Sea Ranch his Mother Earth, and created the ground-breaking Condominium One. Obie Bowman designed the Walk-in Cabins, a remote gathering of Hobbit-like dwellings in a kingdom of redwoods. Landscape Architect Lawrence Halperin designed the master plan based on his experiences in a kibbutz, of open land held in common and homes sited in deference to nature.

NBR could build homes at a medium density, three to four story buildings with parking one-half story underground. Hence, creating a focused sense of place in development areas that would maximize revenue, while ESHA could not only be protected, but restored and featured as an amenity to the development and community.

With regards to a hotel, though the Commission staff advised to remove hotel use from the plan, it could be accomplished with some sensitivity. Yet, they must disabuse this Bluff Road from Pacific Coast. In fact, personal automobiles should be banned from the interior of the site, with parking at the edges. Thus residents could get around via Neighborhood Electric Vehicles and shuttles could ferry hotel guests to their blufftop accommodations. Hotels could be designed on stilts or on minimized footprints to protect ESHA and be ecologically designed like the Southern Ocean Lodge in Australia, or Tree Bones in Big Sur, where the architecture could serve as a framework for nature and guests to blend with.

It’s interesting to note that biologist Robb Hamilton reminded me that many years ago legendary OC environmental activist Dr. Jan Vandersloot, who left us far too soon in 2009, predicted only 20 acres could be legally developed at Banning Ranch.

It seems the Coastal Commission seems to agree. The developer and the community should come together to collaboratively craft a new regenerative vision for the site that would protect and restore this endangered keystone coastal resource, while creating an innovative residential-resort community. So, let’s get to work!