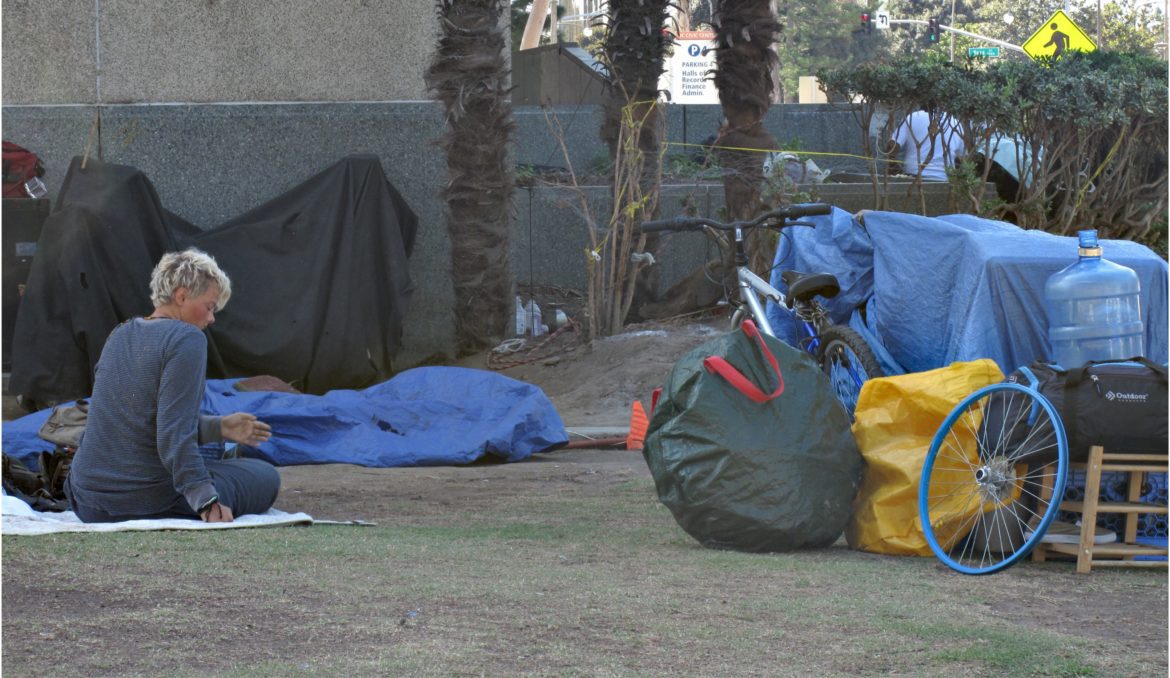 A homeless woman at the Orange County Civic Center in downtown Santa Ana.

As the new year dawned in 2016, the situation in Orange County’s Civic Center was as bad as it’s ever been. El Niño rainstorms, which were anticipated for months, drenched many of the hundreds of homeless people who live there – as county officials stumbled in opening a shelter across the street.

Homeless deaths were skyrocketing amid a growing epidemic of drug overdoses. And OC remained the most populous county in the country without a year-round emergency homeless shelter.

But since then, there have been clear signs of progress. The first year-round shelter opened and brought safe sleep and services under one roof in Santa Ana. Mental health is getting a renewed focus. And the county brought in a well-regarded expert to oversee homeless services and work with community members on fixing problems.

But there is much yet to be done. Topping the list of challenges is a severe shortage of housing options for single men and women who are homeless. Also, the county’s much-touted transitional center in Anaheim has been beset by delays in opening. Advocates have also expressed concern about the way guards treat homeless people at the Santa Ana shelter.

But overall, 2016 will go down as a year Orange County officials finally began to take steps to improve a shameful reality.

Here is a recap of our coverage: 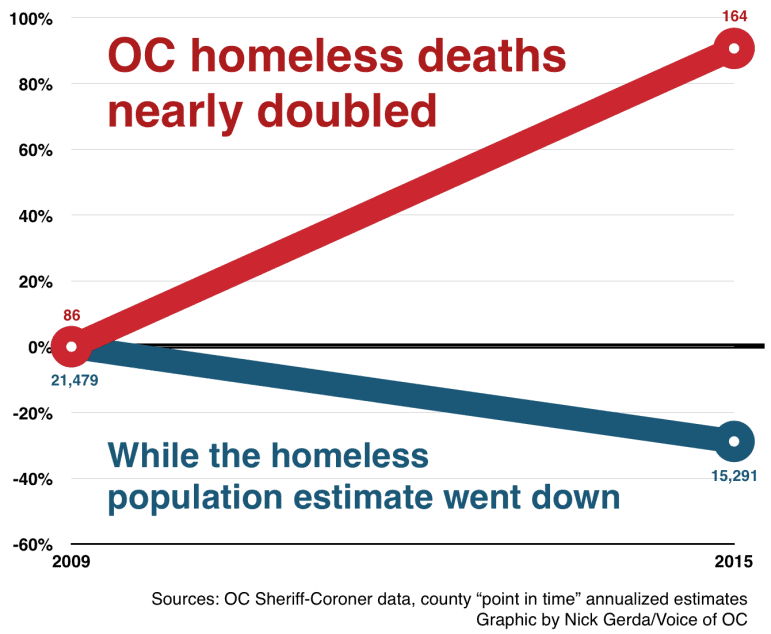 Highlighting the dangers of living on the streets, homeless deaths have skyrocketed in Orange County and elsewhere. Early this year, Voice of OC revealed that homeless deaths nearly doubled from 2009 through 2015, despite the overall homeless population decreasing. Fueled largely by a nationwide overdose epidemic, the size of Orange County’s increase stood out in comparison to neighboring LA and San Diego counties.

Advocates said the tragic statistics highlight a lack of medical care and substance abuse treatment for the homeless. And they says it’s far more costly for the public when homeless people lack preventative care – since they instead end up in expensive emergency rooms.

Attention continues to grow on the issue, with local officials, activists, and faith leaders joining together last week for a memorial service for the over 190 homeless people who died in Orange County this year. It was the first time the county recognized National Homeless Persons’ Memorial Day, organizers said. 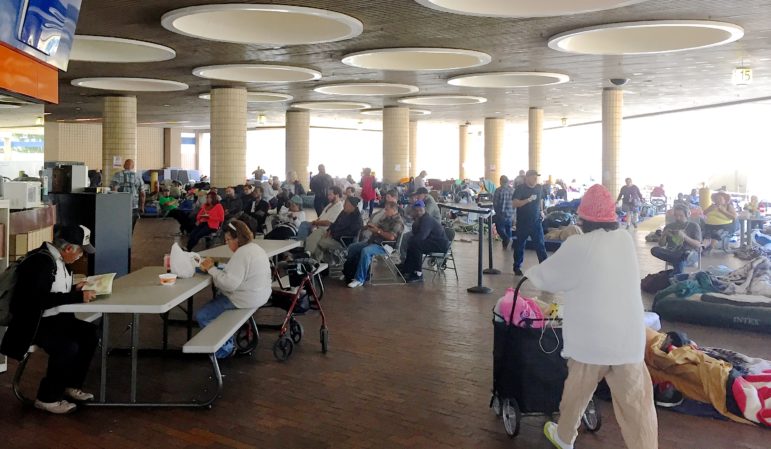 Perhaps the single most tangible achievement on homelessness this year was the opening of the county’s Courtyard shelter in Downtown Santa Ana. Created at the urging of Supervisor Andrew Do as he was facing criticism during his re-election campaign, the shelter now sleeps over 400 people per night, and provides daytime access to showers, laundry, and bathrooms. It’s also become a centralized hub for services like mental health counseling and legal aid.

The shelter has drawn both praise and concern, particularly about how some of the guards treat homeless guests. But overall the shelter is seen as a step in the right direction, as well as a sign of commitment to the issue by county supervisors.

After years of neglect, broken mental health system gets some attention from top officials 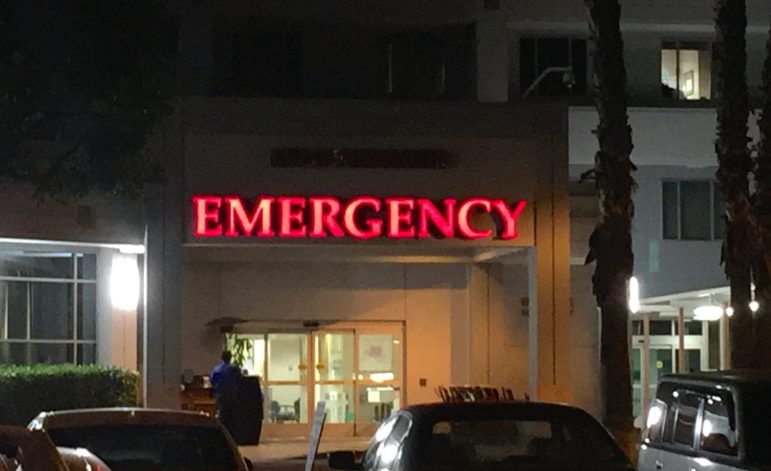 Untreated mental health issues are often a key factor in homelessness, and experts describe Orange County’s mental health system – along with other counties’ systems – as fragmented and sorely lacking in options for prevention and recovery treatment. Experts say that’s contributed to homelessness, as well as a rise in psychotic episodes among children who are at-risk for homelessness.

But Orange County seems to have reached a turning point, with top officials inviting public input about problems, attending a national summit on reducing incarceration of people with mental illnesses and substance addictions, and rising hopes among mental health advocates.

Not all the news on mental health, however, was good. A county grand jury found that the county’s jails have become the de facto housing facility for the mentally ill, and that a lack of funding for treatment programs and over-reliance on isolation techniques and medication means most mentally ill inmates have needs that are going unmet. 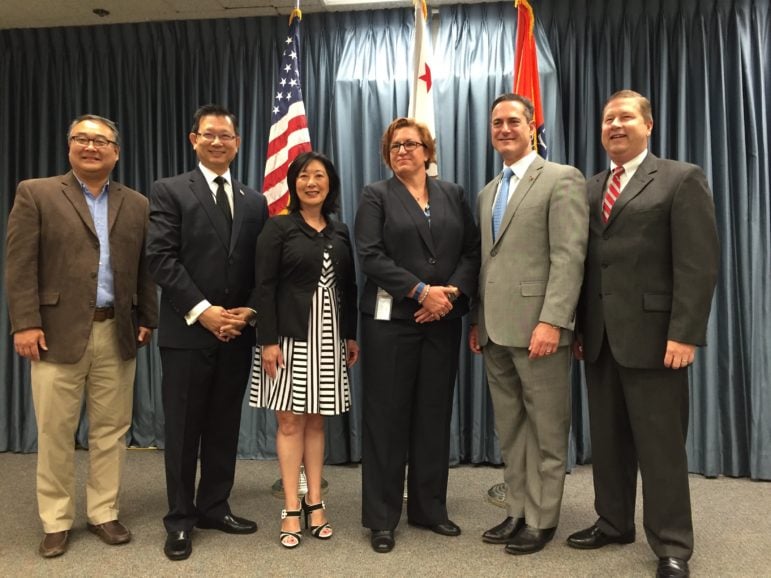 For years, Orange County’s lacked a single point-person on homelessness, instead relying on a fragmented system scattered across at least six county agencies and 34 cities.

That all changed in May, when county supervisors brought on Susan Price to be their new “homeless czar,” after the position was created at Do’s urging.

Price came to the county from Long Beach, where she served as homeless services coordinator, and has been widely praised by advocates for a deep knowledge of the issues and willingness to give frank assessments of what needs to be done.

The faces of homelessness 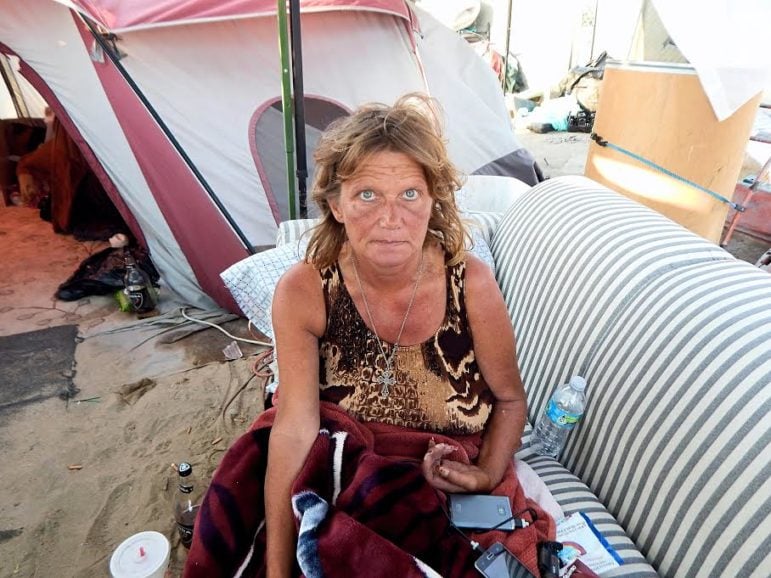 Mariah Castaneda for Voice of OC

Denise Lindstrom Le Blanc, who has been homeless for two years, now calls the bed of the Santa Ana River home.

Known as “Skid River,” the Santa Ana riverbed is now how home to hundreds of homeless people. This summer, Voice of OC intern Mariah Castaneda brought her camera there to get a glimpse of what life is like for those who call it home.

Her photo essay presented intimate portraits of her subjects, and gained national attention after it was highlighted by The New York Times. 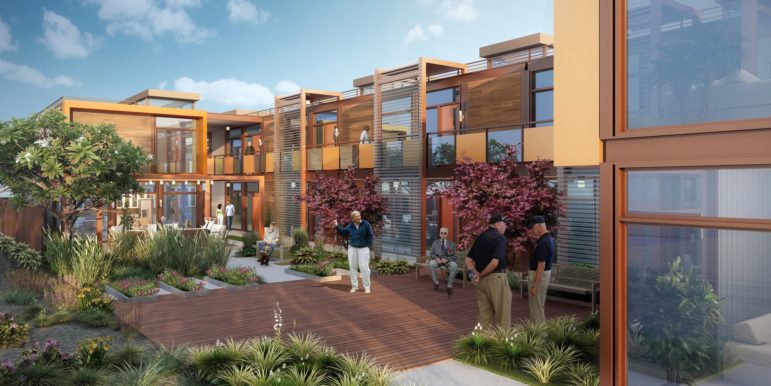 A visualization of the Potter’s Lane project, from its developer American Family Housing.

As Susan Price has noted, Orange County has a severe shortage of affordable housing options to help homeless people get off the streets long-term. And advocates agree, with the ACLU declaring in an October report that the county can dramatically reduce homelessness, as well as save public costs, by investing in housing.

For ideas, Price has pointed to local projects implemented this year like “Potter’s Lane” in Midway City, which converted shipping containers into homes for the homeless, as well as “Guest House” in Santa Ana, which is in a converted motel.

Supervisors at first didn’t show much interest in finding a way to pay for a significant expansion of housing options, and the ACLU report was met with criticism. But earlier this month, Supervisor Do voiced his support for housing efforts, saying he and the other supervisors need to start thinking about it.

“If you don’t have a way to process people out [of homelessness], it’s just a band-aid approach,” Do told the county’s Commission to End Homelessness. A deliberation, he said, “will be coming forth very, very soon.” 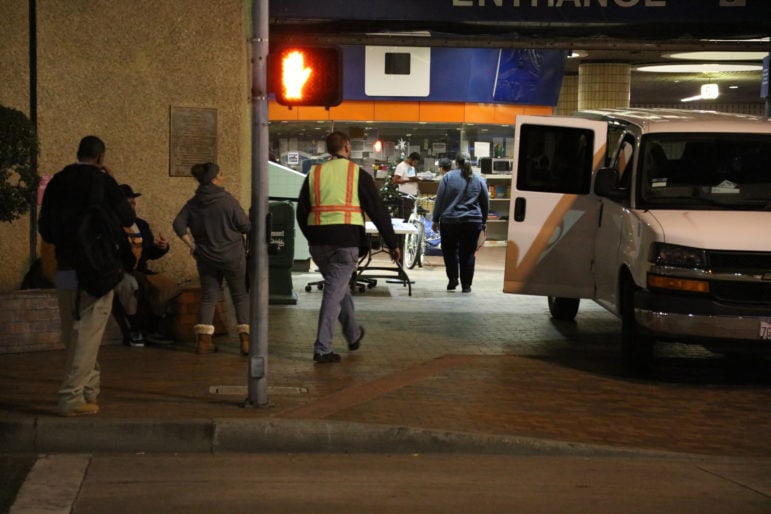 The scene on a weekday evening in front of the county’s new homeless shelter in Santa Ana.

After a series of incidents, Voice of OC reviewed the county’s contract with The Midnight Mission, which runs the county’s new homeless shelter in downtown Santa Ana.

Our review found that several of the nonprofit’s employees working security lack state licenses usually required for people who work such jobs. Some also appear to have serious criminal records, including one guard listed in the contract who a Midnight Mission official acknowledged is a registered sex offender.

While tight-lipped about the criminal records of specific employees, Midnight Mission officials say a key part of the nonprofit’s mission is to give a second chance to formerly homeless people — including some with criminal histories — who have turned their lives around and want to contribute to society.