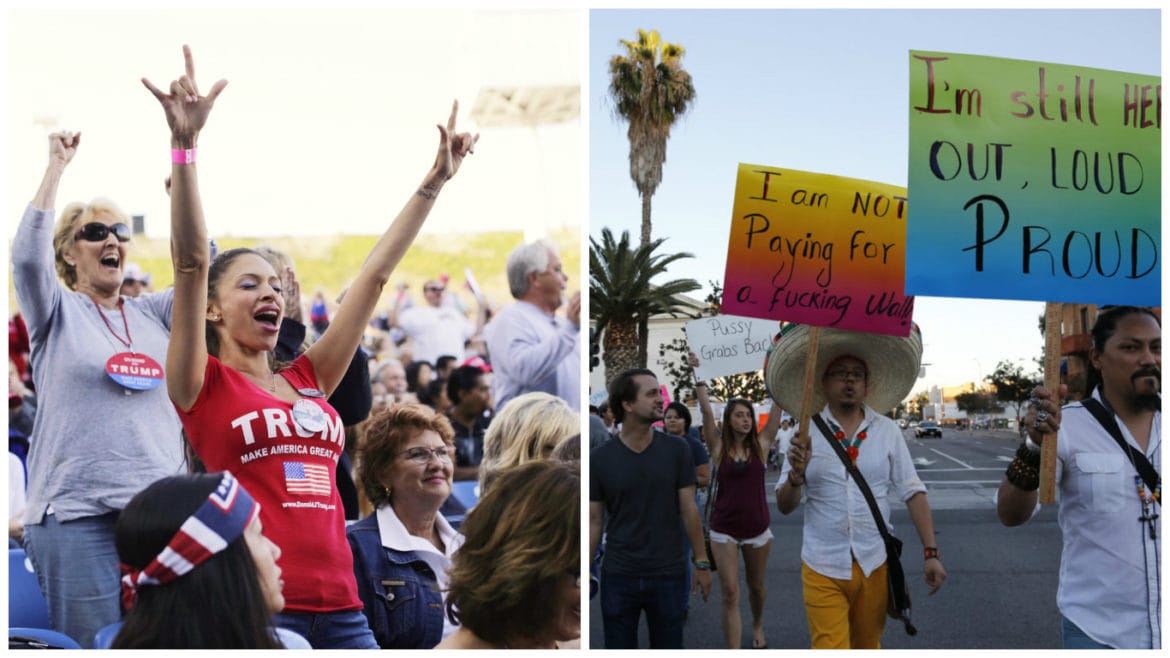 Julie Leopo for Voice of OC

At left, a Trump supporter at a rally last summer in Costa Mesa. At right, protesters participating in an immigrant-rights march.

It wasn’t long ago that if you were looking for harsh rhetoric and hardline policies on immigration, you need look no further than Orange County.

Republican officials in the “reddest county in America” were not at all shy about deriding our porous borders and condemning those who advocate for amnesty for people in this country illegally.

Consider Costa Mesa Councilman Allan Mansoor, who gained both notoriety and criticism in the latter half of the last decade for his extreme positions, including pushing in 2010 a city council resolution to declare Costa Mesa a “rule of law” city committed to ending illegal immigration.

Mansoor had such a high profile on the issue that he was named an honorary member of the Minuteman Project, a radical anti-illegal immigration group founded by Laguna Niguel resident Jim Gilchrist.

And while Mansoor may have been among loudest local voices, he was certainly not alone.

U.S. Rep. Ed Royce (R-Fullerton), one of the longest-serving members of the county’s congressional delegation, routinely staked out tough positions on immigration – an example being his support for a 2011 bill that would have required children born in the US to have at least one parent who is a citizen or legal permanent resident in order to receive citizenship.

Fast-forward to 2016, and the GOP standard bearer, Donald J. Trump, wins on an unabashedly “America first” platform that included some of most draconian policy prescriptions for immigration in recent memory. And the president made clear in his first week, with two executive orders that will radically change U.S. immigration policy, that he intends to live up to his campaign rhetoric.

The first order, signed last Wednesday, significantly increases the pool of people who can be deported by including not only unauthorized immigrants who have committed serious crimes, which was the threshold at the end of the Obama administration, but also those who have committed “any criminal offense” and those who have been charged but not convicted of a crime.

Then, on Friday, he issued another order calling for a temporary ban on refugees from seven Muslim-majority countries. This order sowed chaos over the weekend, with scores of immigrants being denied entry at airports while protesters filled the terminals.

And though the actions have been cheered by Trump’s supporters and received nods of approval from a number of Republicans in Congress, including Speaker of the House Paul Ryan, the reaction among Orange County Republicans – not only to the executive orders, but to the Trump presidency in general – has been muted.

Royce, who is the chairman of the House Foreign Affairs Committee, issued a statement this weekend regarding the refugee ban that was far from full-throated support, and could even be interpreted as veiled criticism.

“Pausing the intake of refugees from terror hot spots is the right call to keep America safe,” Royce said in his statement. But then he added: “I hope cases of individuals with visas traveling as this action went into effect – including some who served alongside U.S. troops – will be resolved quickly.”

The measured tone of this statement may seem at odds with the Ed Royce who, in 2008, supported a bill that would have required government services be delivered in English. But it does seem consistent with the Ed Royce who last year co-sponsored a bill with California Democrat Judy Chu to allow colleges and universities that serve large Native American, Asian American and Latino populations to receive federal funding.

A moderation of sorts can also be seen in Mansoor, who after two terms in the state Assembly and an unsuccessful run for county supervisor in 2014, was reelected to the Costa Mesa City Council in the November election.

His past emphasis on crimes committed by unauthorized immigrants was only mentioned as part of his overall public safety message, which largely focused on crime at local motels and newly released prisoners.

Republican political strategist Jon Fleischman is not surprised by such shifts. He says it’s now incumbent on local politicians to get out in their communities and make it clear where Trump’s successes reflect their beliefs, and when his rhetoric does not.

“If I were a local elected official, I would just start getting used to saying, ‘you know Donald Trump,’ and roll your eyes,” said Fleischman. “Because buckle up, we’re on the Trump train, for better or worse.”

One looking for an explanation for this more nuanced approach need look no further than Census data and the county’s voter registration rolls.

The county GOP’s once-vaunted edge in voter registration has continued to erode, falling from 44 percent in November 2008 to 37 percent in January 2017. Democrats now make up 33 percent of voters while the percentage of voters with no party preference, currently 24 percent of the electorate, continues to grow, according to the Orange County Registrar of Voters.

All of this contributed to the previously unthinkable happening in Orange County in November: Hillary Clinton won the county by a 51 to 43 percent margin. It was the first time a Democratic presidential candidate won in the county since Franklin D. Roosevelt in 1936.

However, while the changing electoral landscape shouldn’t be discounted, it also shouldn’t be overstated, said Michael Schroeder, a major Republican donor and former chair of the state GOP.

Schroeder acknowledges that while immigration is not an issue that is working for California Republicans now, the pendulum has a way of swinging back the other way.

“I think there are areas where there’s a strong open-border, sanctuary city sentiment, and candidates who don’t have those beliefs will have tough times,” Schroeder said. “But I don’t think that’s going to go on forever.”

Fleischman echoed those sentiments, saying the relative silence on the issue in this election cycle shouldn’t be mistaken for a fundamental shift in views among Republicans.

“I think a lot of what Trump wants to do on the immigration issue is embraced by the immigration by the party on the state and local party,” said Fleischman. “You don’t want to be associated with [his rhetoric], but I don’t think there’s a movement for a pathway to citizenship.”

A flap during the November election involving Latino Republican Mark Lopez, who ran unsuccessfully for the Anaheim City Council, was a window into the difficult balancing act facing the local GOP.

The party publicly rebuked Lopez when he stated at a candidate forum that he is against deportations that would separate families, noting that he sponsored his formerly unauthorized father for citizenship. Lopez added that he also opposes local authorities using resources on immigration enforcement.

Support for sanctuary cities is akin to sacrilege against the party platform and prompted local GOP Central Committee Chairman Fred Whitaker to pull funding for Lopez.

But he later reinstating it after reviewing a recording and determining that Lopez’s remarks did not amount to support for sanctuary cities. Some saw the change of heart by Whitaker, who refused to be interviewed for this article, as driven by a desire on the part of he and other party leaders to not alienate the relatively few Latinos they have in their tent.

But not everyone agrees that the winning strategy for Republicans in OC is to maintain a safe distance from Trump and his inflammatory rhetoric.

James Lacy, a Trump delegate and former Dana Point city councilman, has argued that embracing Trump could revive the California GOP and that the party can grow by targeting disenchanted middle class voters with no party preference, many who happen to be white.

Lacy says that Trump’s immigration policy will be largely focused on deporting criminals and that, as the President’s approval ratings increase, local GOPs will benefit.

“The economy is going to improve, his popularity is going to go up, his immigration policy is not going to be as scary as you and others in the media parrot, and in two years from now, the Republican Party will have a rebound,” said Lacy.

Another interesting aspect to the GOP’s relationship with the immigration issue is how it relates to their increased efforts to court Asian voters. Historically, Asian Americans have been far less likely than Latinos to consider it a key issue.

But that is changing, as Asian Americans are now the fastest-growing unauthorized population, making up 14 percent of the total, according to a 2015 study by the Migration Policy Institute.

Support among Asian Americans for pathways to citizenship for unauthorized immigrants also appears to be growing, with 58 percent supporting a pathway in 2012 compared to 32 percent in 2008, according to a survey conducted by the National Asian American Survey.

Schroeder, however, says Asian Americans have continued to support local Republican candidates, and any support for amnesty hasn’t been reflected in a rebuke of the party at the ballot box.

“Our strong record with small businesses, the ability to support and educate your family, those are issues that we just win on,” said Schroeder “All communities have some illegal immigration…[but] from what I can tell there’s not a strong open border sentiment in the Asian community.”

How local Republicans act depends largely on whether Trump follows through with his proposals.

“You’re in a low point in Orange County and statewide. I think the Republican Party has no place to go but up,” said Lacy. “I believe a successful Trump presidency will be able to stop the decline in registration and maybe even help it.”

Fleischman, meanwhile, doesn’t believe that voters, whether they like Trump or not, will toss out their support for Republican candidates entirely.

“I think at the end of the day you have to understand every voter is motivated by multiple issues – and clearly immigration is not the lead issue you’re going to use in talking about the Republican Party,” said Fleischman.