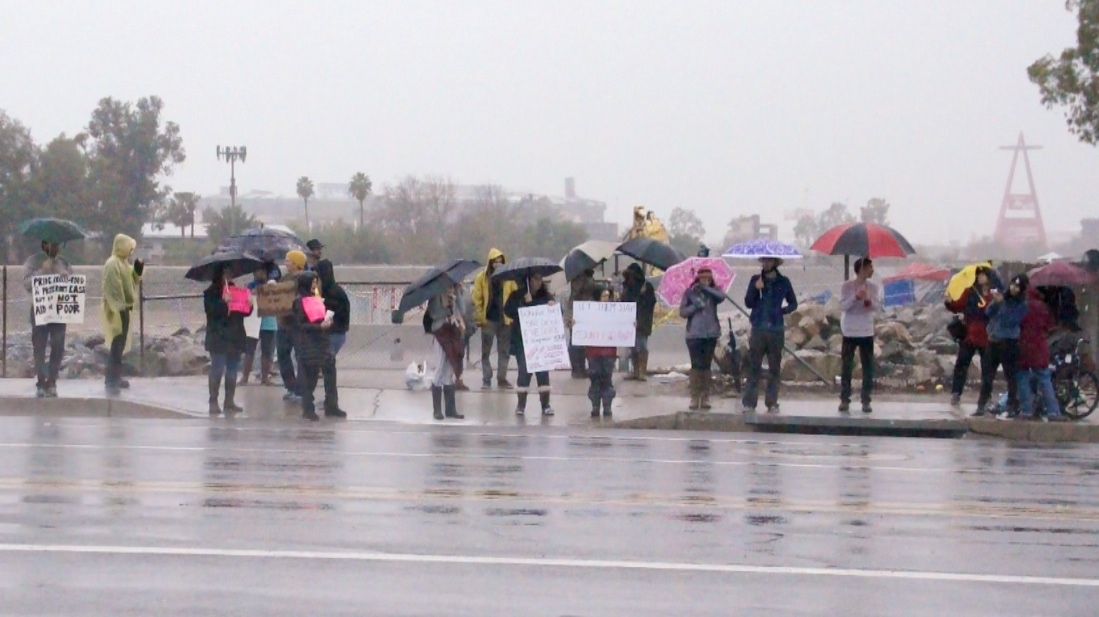 Demonstrators hold signs along Chapman Ave. next to the Santa Ana River on Monday morning.

More than 30 protesters gathered in the rain Monday to demonstrate at the Santa Ana riverbed against plans by county officials that would push out dozens of homeless people who live along its banks.

Carrying signs and chanting “Hey hey! Ho ho! These people have nowhere to go,” demonstrators took aim at the county’s plans to replace a homeless encampment with sand and boulders for a flood control project. 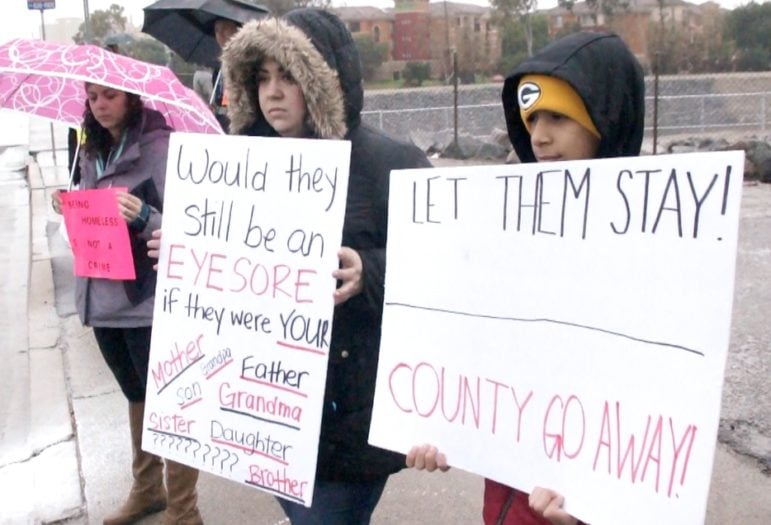 Notices posted by the county in recent weeks warned homeless people they would be arrested and prosecuted if they remained in the area.

Activists said evictions would be unconstitutional because the county has failed to provide an alternative place for people to go. Existing homeless shelters are already operating at or near capacity, they said, and county officials have acknowledged a severe shortage of transitional and permanent housing for homeless people.

In fact, Shannon Widor, the spokesman for the county’s public works department, recently said of the riverbed’s homeless residents: “We know they have no place else to go.”

Activists said that’s exactly why the county’s latest threat to evict homeless people is not only inhumane, but illegal.

“The county just can’t be coming in and displacing people this way without giving them another place to go,” said Eve Garrow, a homelessness policy advocate with the American Civil Liberties Union of Southern California. 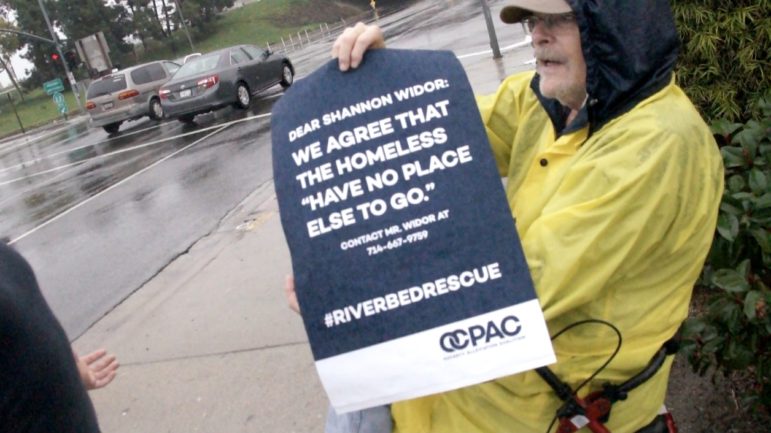 County officials say they won’t be clearing the entire area between Orangewood Ave. and the 22 Freeway on the first day, but that people will eventually have to move. Widor says the county is giving people time to relocate before the county clears the area.

“As the project progresses, the County is requesting that those encamped in the area voluntarily comply and relocate from the project area,” county spokeswoman Carrie Braun wrote in an email to a Voice of OC reporter Monday night. County outreach workers have been offering transportation to National Guard armory shelters, she said.

Asked where the county recommends homeless people go, if, as activists say, the armories are near-full, Braun said county officials “are not telling people where to relocate as there is no one-size-fits-all solution.”

Some protesters said they were prepared to physically block the county’s efforts to place the boulders. Meanwhile, lawyers were on hand to observe potential interactions between law enforcement and the protesters.

“I came out here to practice civil disobedience and stop the county from engaging in illegal action to violate the constitutional rights of the folks who have nowhere else to go,” said Mohammed Aly, a lawyer and activist who helped organize the protest.

Aly placed new notices next to the county’s, noting the shortage of shelter beds and saying “attorneys and activists will monitor any illegal County action, including arrests and removal of property, targeting individuals involuntarily experiencing homelessness in this section of the channel.”

It includes a phone number (714-414-3736) for the group he founded, the OC Poverty Alleviation Coalition. 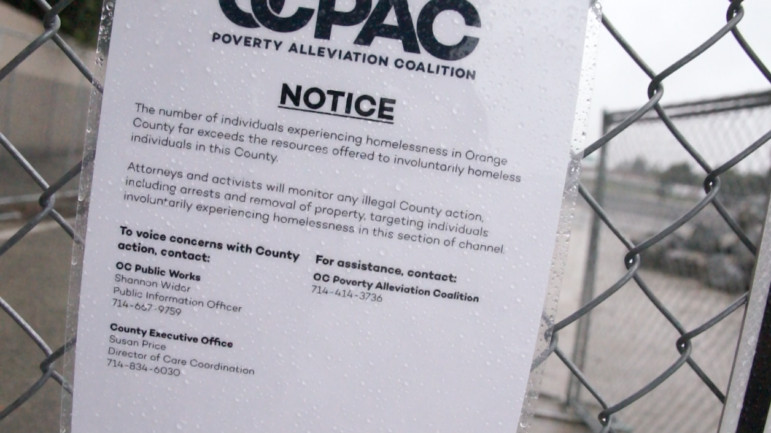 “It’s unjust. And more and more, in America, standing up for justice means defying authority. That’s the day and age we’re in right now,” Aly said.

Among those who attended the demonstration were Dwight Smith, who runs the Isaiah House women’s shelter in Santa Ana; and Greg Walgenbach, director of the Catholic Diocese of Orange’s Office of Life, Justice and Peace.

Garrow and Aly urged residents to call county supervisors to voice their opinion.

“We need to let the Board of Supervisors know that this is a humanitarian crisis, and it needs immediate attention, not just the disbursement of encampments,” said Garrow.

Correction: A previous version of this article incorrectly paraphrased a statement from county public works spokesman Shannon Widor regarding the county’s plan to evict people along the riverbank.