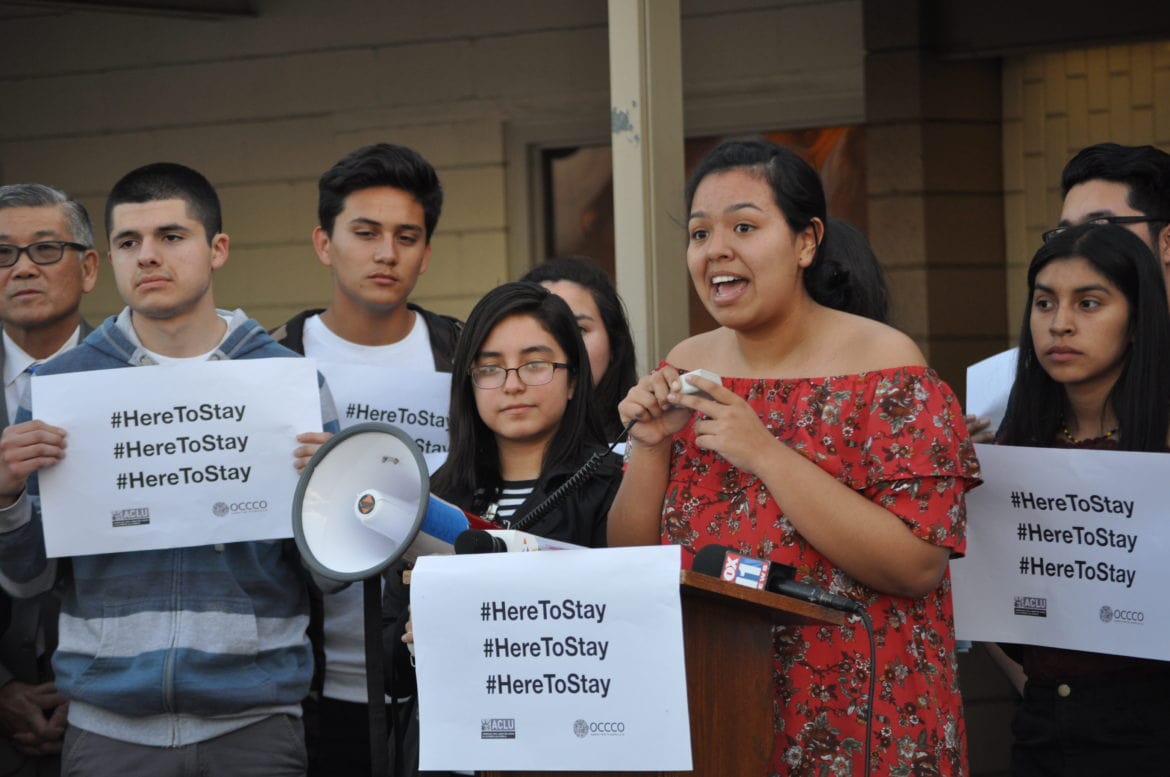 Photo by Thy Vo.

Anaheim High School Student Alex Retana speaks at a press conference before the board meeting.

The Anaheim high school board unanimously voted Tuesday to declare the school district a safe haven for students regardless of their immigration status.

“I go to school scared sometimes, sometimes I don’t even want to go to school knowing ICE [Immigration and Customs Enforcement] might be there waiting for one of us to go by,” said Manuel Romero, an undocumented student at Loara High School told the  Anaheim Union High School District (AUHSD) board at the meeting.

The resolution adopted by AUHSD largely outlines existing laws that prohibit schools from sharing student information and reminding federal authorities of their own policy not to conduct enforcement activities at schools and other sensitive locations.

The district’s action also comes as media reports of arrests by immigration authorities in front of churches and schools have stoked fears among immigrant communities.

The Anaheim resolution, which was proposed by Trustees Al Jabbar and Anne-Marie Randall-Trejo, reaffirms that the district will not provide immigration authorities any student records that might be used to determine legal status; declares the district a safe place for families to seek information and assistance; and promotes diversity within the school district.

“In every class that I have, there are one to three undocumented students,” said Jose Magcalas, a Loara High School history teacher and board trustee for the Anaheim Elementary School District.  “I’m glad you have this resolution so at least they can feel safe at school.”

The students are calling on the school board to create a task force and opportunities for students and parents to discuss the resolution and inform the community of what protections the district can and can’t offer.

“We hear you, we hear your families,” said district Superintendent Michael Matsuda at a press conference organized by OCCCO before the board meeting. “In these challenging times more than ever we need to build trust…we only go as far as those who are least privileged.”

The 1982 U.S. Supreme Court ruling in Plyler v. Doe also ensures that all children in the United States are entitled to a K-12 education regardless of their citizenship or immigration status.

The resolution doesn’t offer undocumented students additional legal protections, and it is illegal under federal law to intentionally harbor and shield unauthorized immigrants from detection. But the resolution, school officials say, will serve to quell anxiety and assure students and families that the school district is a supportive and safe place to talk and ask for help.

“I don’t know if this is going to take away all the fears…but I hope it will be a solace to all of you that AUHSD is behind you,” said Jabbar. “We as a school district, we want to assure your only concern should be educating yourself.”

The district has held five town hall meetings with the city, police department and nonprofit groups to answer questions about the effect of immigration changes, which district staff say were well attended by Latino and Asian American parents.

Karlak said the district has “no way of knowing” how many undocumented students are in the district but said such students have “a big presence in our district.”

Although neither the city of Anaheim or school district have estimates of their undocumented population, there are an estimated 300,000 unauthorized immigrants in Orange County, according to the Public Policy Center of California.

Trump has threatened to revoke federal funding for sanctuary cities and jurisdictions, although it’s unknown whether or not the administration will carry out that promise. Karlak said most of the district’s federal funding is to support special education and impoverished students.

“The district isn’t in the business of not welcoming students. We welcome all students. It’s the law. It’s morally correct, and we will continue to represent this viewpoint,” Karlak said.