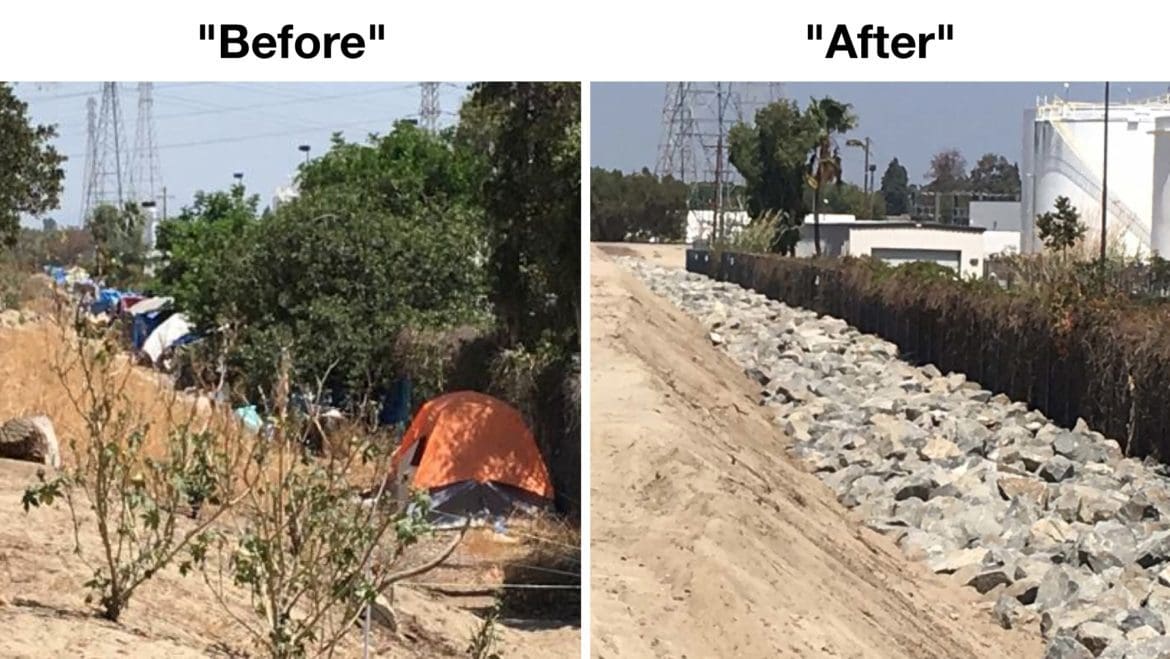 Before and after photos of a project Supervisor Shawn Nelson requested near the Santa Ana riverbed, as depicted in "before" and "after" photos by a county public works official.

Newly-released emails show that, at the request of Supervisor Shawn Nelson, county officials replaced a homeless encampment with a pile of rocks last summer along the Santa Ana River near the Honda Center.

“One update that may be of interest to Supervisor Nelson is the first location he visited on our tour along the Santa Ana River just north of Katella,” county public works manager AJ Jaime wrote in a Sept. 7 email.

“All maintenance work that the Supervisor requested during our tour will be completed by next week, please see attached before and after photos.”

The “Before Photos” sent by Jaime show the homeless camp and the “After Photos” show an extended section that had been replaced with boulders. 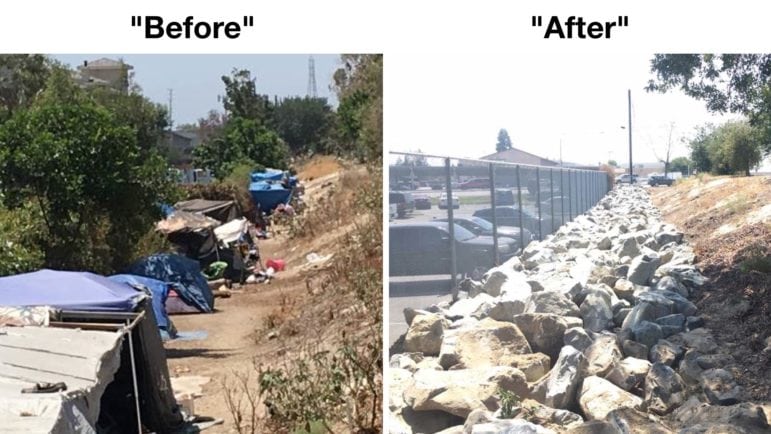 “Before” and “after” photos Jaime attached in his message to Nelson’s office.

Jaime was responding to a request from a Nelson aide for “any updates I can provide our constituents” about the riverbed.

(Click here to read the emails and here for the attachment with before and after photos.)

The emails and photos were obtained through a California Public Records Act request by Mohammed Aly, a lawyer and advocate for the homeless, who provided copies to Voice of OC.

Nelson didn’t return phone calls to discuss the issue, and county staff have declined to comment on what he asked them to do. 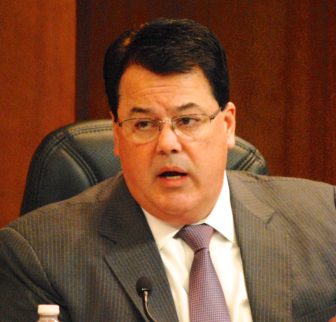 The emails raise questions about whether Nelson also directed a similar removal last month of a large homeless encampment along the river south of Angel Stadium, which sparked protests, an arrest, and at least two federal lawsuits against the county. County officials have maintained that camp, which was adjacent to the 57 Freeway, was replaced with piles of rocks and gravel as part of a flood control project.

In a statement Tuesday, county spokeswoman Carrie Braun said all maintenance work along the riverbed is done “to maintain the channel and protect the community in the event of a flood.”

She declined to answer any questions about what Nelson requested or when he requested it, either for the project by the Honda Center or the one south of Angel Stadium.

“Questions related to requests made by a Supervisor should be directed to their office,” Braun wrote. The five county supervisors, including Nelson, are the ultimate bosses of county workers.

Neither Nelson nor his staff responded to a follow-up request for answers to the questions Braun deferred to them.

Nelson’s action last summer prompted a law enforcement sweep that apparently led dozens of homeless to leave the Honda Center area in August and join other camps further south along the river, near Angel Stadium. Some apparently lost their belongings after they were seized by officials.

How to deal with the county’s large homeless population living along the Santa Ana River is an ongoing controversy involving homeless advocates, county supervisors, local businesses, residents, and cyclists who use the river bike trail. There is a shortage of shelter beds and housing for homeless, with just over 1,600 housing beds and about 600 walk-in shelter beds for over 3,000 single homeless men and women.

The encampment discussed in the email was located north of Katella Avenue, along the east side of the Santa Ana river and across from the Honda Center arena. It was home to several dozen homeless people who lived on county government property in a line of tents between a raised grass berm and a parking lot fence, according to the Orange County Register, photos of the camp and interviews with homeless people.

Officials say the riverbank camps have drawn numerous complaints from neighboring residents and businesses about drug use, trash, noise and small fires. At the same time, homeless advocates said the county’s shortage of shelter beds and housing, along with cities’ enforcement of anti-camping laws, has left no real alternative for many of the homeless people there.

Braun declined to give the date of Nelson’s tour of the area near the Honda Center and said it was up to Nelson’s office to release it.

On Aug. 15, officials apparently followed through on Nelson’s directive, forcing dozens of homeless people to leave the area before maintenance crews started their work, according to the OC Register and videos posted by activists at the time. Sheriff’s deputies stood watch as people removed their belongings.

In another video, a homeless man says people returned to the camp that day only to discover their belongings had been taken by county officials.

Around the same time, county officials began locking gates and closing public access along the same east side of the river, from Katella Ave. south along the 57 Freeway to the 22 Freeway, where there were other homeless encampments. Most of that area was evicted by the county last month, with rocks and boulders replacing the tents and tarps that sheltered the homeless. The evictions sparked lawsuits, protests, and an arrest.

It’s also unclear which constituents he was responding to when he asked officials to replace the homeless camp north of Katella near the Honda Center.

In a statement, Aly said the emails show county officials have been misleading the public when they say homeless people are evicted from the riverbanks because the area is needed to store rocks for flood control.

“According to [county statements], it’s by accident that the encampments happen to be in the so-called ‘project area.’ Not the case,” Aly said.

“The county’s ‘project’ was to target the encampments,” he said. “Homeless people make the mistake of existing in a place that was inconvenient for the county’s other, more influential constituents.”

One such release, announcing a settlement last month with the ACLU, says the county project “focuses” on ensuring that the county “is prepared for flood-fighting activities.” Toward the end of the release, it says “the County is aware that there are homeless encampments in the project area.”

The county’s statements lack credibility, said Aly. “[Their] narrative is debunked by these emails.”

In response, Braun said: “The County has continuously reiterated the fact that the OC Public Works project begun earlier this year from Orangewood to Hesperian is for flood control maintenance and security.

Asked if she can say Nelson did not request the project south of Angel Stadium, she again deferred comment to Nelson’s office.

A homeless man who said he witnessed the eviction north of Katella near the Honda Center said it happened quickly.

Sylvester Gomez said multiple law enforcement agencies participated in evicting the homeless people in a matter of hours. He compared it to a fast-paced military operation, saying it was like a “shock and awe” or “blitzkrieg” campaign to get homeless people out of the area.

As for the “maintenance” project Nelson requested, Gomez said: “They’re just using that as an excuse to get us out.”

When their camp was broken up, he said many homeless people moved further south, closer to Angel Stadium, as well as to the west side of the river.

County officials say their maintenance work that Nelson requested at the camp north of Katella was performed between late August and mid-September.

“The individuals encamped in the area were provided approximately two weeks’ notice before being asked to voluntarily relocate from the area,” the county statement says.

At the time of the August clear-out that Nelson requested, the county had no shelter option for most of the single adults living on the streets. Its Courtyard shelter didn’t open in Santa Ana until October, and has since become heavily occupied. And the county’s winter armory shelters – which generally don’t allow the pets that many homeless people have – didn’t open until December.

The camp north of Katella ran adjacent to a bike path frequented by cyclists from across the county, as well as parking lots for an Extended Stay America hotel, an office building, and the Cinemark Century Stadium 25 movie theater.

It was also across the street from the Sheriff’s Department’s public pistol range and regional training facility for law enforcement. And it would have been visible from the Honda Center’s parking lot.

The clear-out also came about two weeks before the Disneyland Half-Marathon, in which participants ran along the west side of the river on Sept. 3 and would have been able to see the encampment.

Marathon spokeswoman Jessica Baker didn’t return a phone message asking if Disney had a role in getting the camp cleared out.

There was another sweep of homeless camps on the west side of the river north of Katella on Sept. 2, the day before the half marathon, according to a video by homeless activist Lou Noble.

Police were on hand as inmate workers from the county jail cleared out homeless people’s belongings on the western side of the river north of Katella, according to Noble’s video.

Noble claimed the homeless people were being cleared out because the Disneyland event’s route would be going along that section of the riverbed and officials didn’t want participants to see the homeless encampment.

County officials disclosed the emails to Aly on March 3, but not the photos that showed the before and after images of the encampment. Aly requested that attachment on March 10 and received it March 15.

After repeated public criticism and legal battles from advocates, Aly said Nelson called him and other activists last week to express a desire to work with them.

The outreach is welcome, Aly said, adding he and others would continue to press Nelson and the rest of the supervisors to take stronger action to help homeless people. He said he and other activists are ready to work with them.