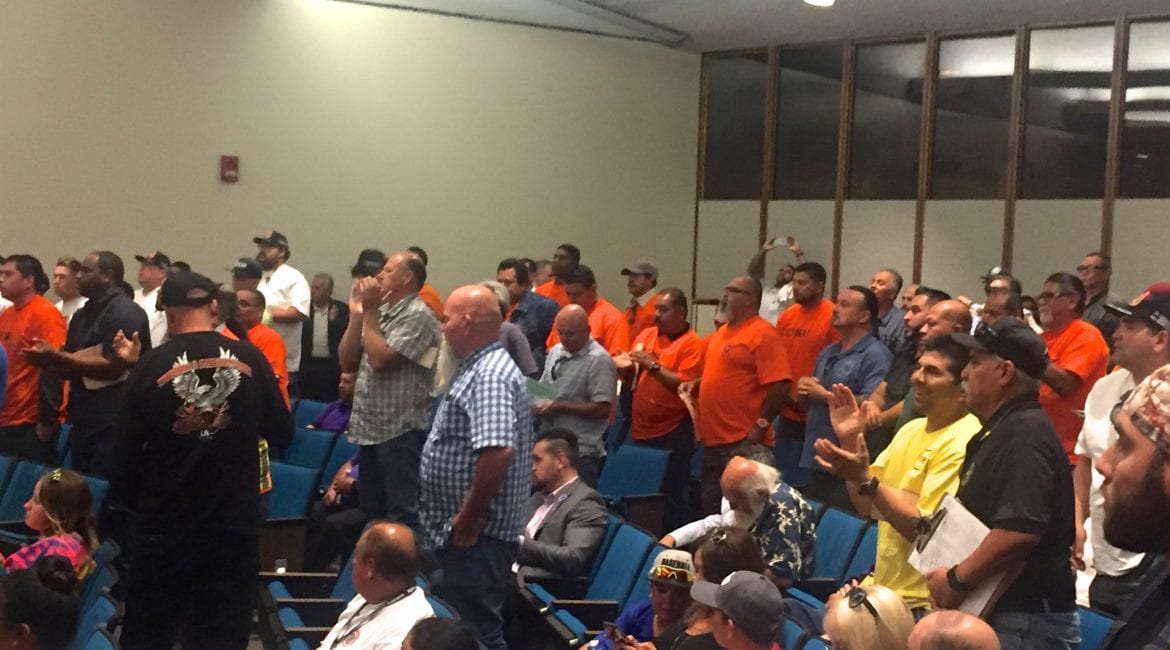 Companies hired by Santa Ana for city construction and public works projects will have to use unionized laborers for the work, after the City Council unanimously approved a wide-ranging agreement with trade unions.

The move was celebrated by all seven council members, as well as union leaders and workers, who said it would provide apprenticeship training and good-paying jobs to city residents.

“Moving forward, I feel much better that we’re going to have our local residents doing some of that work,” said Councilman Jose Solorio. In addition to reducing commute times, he said, “it’s going to keep more money in the local economy.”

Calling the agreement “historic,” he said Santa Ana is the first city in Orange County to have such a contract, known as a project labor agreement or community workforce agreement.

No one spoke against the agreement at Tuesday’s council meeting, though there was some disagreement about the extent to which it will increase the city’s costs for construction work.

The agreement requires contractors to hire workers for city projects through a union referral system, known as a union hiring hall. The contractors have the option of rejecting any applicants and can find employees elsewhere in the event unions don’t meet the contractor’s standards.

It also sets a goal of having 30 percent of working hours be performed by workers who live in Santa Ana, or military veterans who live anywhere.

Last fiscal year, the city had at least $27 million in contracts that would meet the threshold of the agreement.

In exchange, the trade unions agreed not to encourage or participate in any activity that disrupts the projects, like strikes, walk-outs, slow-downs, or picketing.

Instead, disputes will be handled through a private legal process called binding arbitration, in which the final resolution will be decided by one of five arbitrators listed in the agreement.

The unions also agreed to have apprentices form up to 30 percent of the workforce on projects.

The agreement is with the Los Angeles/Orange Counties Building and Construction Trades Council, which represents about 140,000 workers in dozens of trade unions.

City executives estimated it will increase the city’s overall construction costs by 10 to 20 percent, or $2.7 million to $5.4 million per year.

About one-tenth of that amount, or $270,000 to $540,000 per year, would impact the city’s general fund, which is facing a multi-million dollar ongoing deficit, according to staff.

Additionally, staff said they needed to hire a contracts administrator to oversee the agreement, at a cost of $134,000 per year, which staff said “will increase the deficit in the budget.” The City Council approved that as well.

However, a union leader and a state legislator said the cost would be the same.

“All of this comes for the same labor costs that you’ve already been paying – that’s the prevailing wage that’s established by the state of California,” said Ernie Medrano, who represents Orange County unions at the construction trades council.

Assemblyman Tom Daly (D-Anaheim) echoed that point in a letter read aloud at the meeting by one of his staff members.

“All of this is done for the same total labor cost that is established by the current [state] prevailing wage for public works, so there’s no additional cost to the public,” Daly said of the agreement.

And a city councilman, Vicente Sarmiento, suggested the cost increase may be zero.

Pointing to the estimated increase of 10 to 20 percent, Sarmiento told city staff those findings “could vary from zero to, you know, whatever the figure could be. You know, you could skew things a certain way.”

“What I don’t want to have happen is for it to be misleading that we’re adding to the cost,” he added.

Deputy City Manager Robert Cortez responded that staff’s research found there was “an array of different ranges” for increased costs, from zero to 20 percent, and felt it was important to disclose that in their report.

But, he added, those figures are not “absolute,” and staff plans to review every future contract to see if there’s an additional cost.

“Even if there was an additional cost, I think it’s offset by the benefit that this brings to our community, with jobs, with employment, with people spending money in our town and keeping the dollars local…and keeping people working,” he said.

The overall agreement takes effect as soon as city and union officials sign it, and the contracts administrator position was immediately added to the city budget Tuesday.

Dozens of trade union members and leaders came to the meeting to support the agreement, and cheered when the council approved it.

“What this agreement provides for you is local hire, primarily for Santa Ana residents. It provides for veteran hire and veteran preferences,” Medrano said.

“It provides for opportunities for young people here in Santa Ana that choose not to go to college but choose to work with their brain and their hands and enter our apprenticeship programs,” he added.

“We think that’s a very good thing, when one of our apprentices….can become a journey-level person and earn over $60,000 a year and doesn’t need a college degree, because that is the other four-year college degree.”

Each of the seven council members took turns praising the agreement’s benefits and thanking the unions for their patience as the city developed it.

“It’s been a team effort,” said Mayor Miguel Pulido. “I think this has really [been] done well. Hopefully it can be used by other cities, it’s something that they’ll want to emulate. Because I think it is well thought-out.”