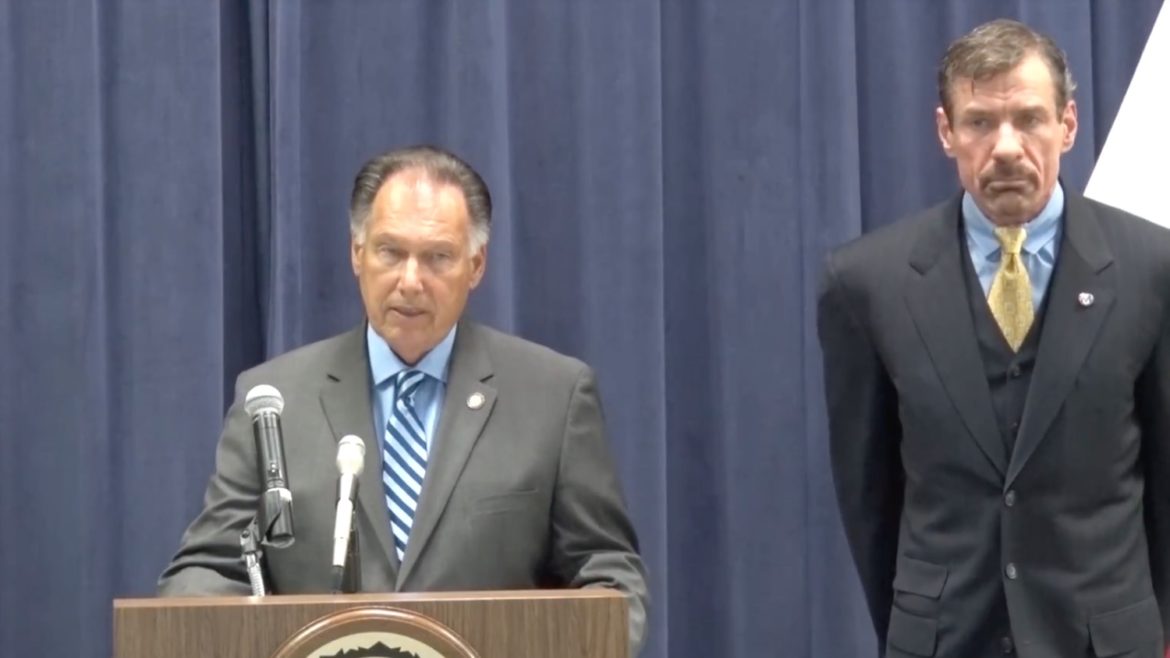 The complaint has been under review for more than a month by the California Fair Political Practices Commission (FPPC), which enforces campaign money and conflict-of-interest laws that apply to government officials and candidates at the state and local level.

It alleges Rackauckas and Schroeder violated state disclosure laws in connection with private jet travel they accepted from Nicholas, the co-founder of Broadcom Corp. and one of Orange County’s wealthiest people.

The complaint mentions a November 2017 trip to Ohio in which Rackauckas and Nicholas spoke at an election night event for a victims’ rights ballot measure Nicholas backed, known as Marsy’s Law. The FPPC has declined to make public the name of the person who filed the complaint.

At question are two California laws that require government officials to disclose gifts they receive worth $50 or more, and generally cap gifts at $470 per source within a calendar year. Rackauckas and Schroeder didn’t report last year’s plane travel on their financial interest disclosures, known as form 700s.

Nicholas was indicted in 2008 on federal drug charges for allegedly supplying cocaine and ecstasy to friends and colleagues. Federal authorities that year seized his Gulfstream G-IV jet, alleging he used the plane to transport and distribute illegal drugs around the country and internationally.

The 2008 indictment alleged during a private plane flight between Orange County and Las Vegas, Nicholas distributed marijuana to other occupants and caused “marijuana smoke and fumes to enter the cockpit, requiring the pilot flying the plane to put on an oxygen mask.”

Nicholas fought the charges and plane seizure. His plane was returned and the drug charges were dropped in 2010, after a judge found prosecutors engaged in misconduct in a related stock fraud case by intimidating witnesses.

Earlier this month, Nicholas was arrested in Las Vegas on suspicion of drug trafficking after police found heroin, meth, cocaine, and ecstasy in his hotel suite. Nicholas’ girlfriend, Ashley Fargo, was found passed out in the room with a partially-deflated balloon in her mouth and was revived by paramedics, according to TMZ.

FPPC officials informed Rackauckas and Schroeder in letters dated July 13 they were reviewing the complaint regarding travel on Nicholas’ plane. As of Monday, the state agency hadn’t decided whether to open an investigation.

The FPPC invited Rackauckas and Schroeder to respond to the complaint, and asked them to do so within 14 days, which was in late July. They had not replied to the FPPC as of mid-August.

The law says that type of travel “is not subject to gift limits,” said Bell, who formerly served as the longtime top attorney for the California Republican Party. The November 2017 trip was related to speaking about the Marsy’s Law measure that was on the ballot in Ohio, he said.

However, the law section he cited, California Government Code 89506, also states the gift limit exemption “applies only to travel that is reported” on financial disclosures.

“There are requirements to disclose payments, advances, or reimbursements for travel – just for disclosure purposes. And so that’s what we’re looking at right now,” said Bell. “We’re looking at that to see what if anything might be there.”

Bell called the FPPC complaint “another frivolous election year complaint.” Rackauckas is up for re-election and faces county Supervisor Todd Spitzer, who previously worked for Nicholas, in November.

Rackauckas and Schroeder didn’t return messages through a DA spokeswoman seeking their comments about the FPPC complaint and why they didn’t report the private jet travel from Nicholas on their disclosure forms.

Nicholas is a resident of Laguna Hills, according to a Los Angeles Times report last month.

Last year, Rackauckas paid a $21,000 fine to the FPPC for failing to disclose the donors of more than $190,000 he solicited for a charity he heads known as OC GRIP. The largest donation was $35,000 by Nicholas.

For the first five years after Rackauckas elevated Schroeder to the chief of staff position, he did not require her to file any financial disclosures. That changed after Voice of OC revealed the policy in February 2015, and Schroeder filed disclosures covering the prior five years.

Nicholas is a longtime supporter of Rackauckas and victims rights’ laws, including Marsy’s Law, which is named after his sister, Marsalee “Marsy” Nicholas, who was stalked and killed in 1983 by a former boyfriend.

Nicholas has funded Marsy’s Law measures in California and several other states, including Ohio, where it was approved by voters last November, and in Nevada, where it is on the ballot this November.

The complaint said Nicholas flew Rackauckas to Ohio for the Marsy’s Law election night event last November, but failed to disclose it.

An Ohio public broadcasting news report from the event quotes Rackauckas and includes audio of Nicholas and Rackauckas apparently speaking at the event in Ohio.

The FPPC complaint accuses Rackauckas and his staff of taking multiple trips on Nicholas’ plane, at a value of thousands of dollars, without reporting it on financial disclosures.

“Tony Rackauckas and his staff frequently use Dr. Nicholas’ jet without disclosing the trips. Attached is a picture of Chief of Staff Susan Schroeder – also required to submit [financial interest disclosures] – on the same jet,” the complaint states. FPPC officials declined to release any photos that were attached to the complaint.

Rackauckas and Schroeder did not report any outside gifts or income on their personal financial interest disclosures for calendar year 2017.

The only financial interest disclosed on either filing was Schroder’s ownership of her music and public relations business, M3 Connection, which she did not report any income from in 2017.

In their July 13 letters, FPPC officials told Rackauckas and Schroeder: “The [FPPC] Enforcement Division is reviewing a complaint received against you regarding possible violations of the [Political Reform] Act’s gift disclosure provisions,” the letters state.

FPPC officials are gathering information about the complaint and have not decided whether to open an investigation, said FPPC spokesman Jay Wierenga. He said he could not disclose who filed the complaint.

The complaint came in the middle of a heated election battle for OC district attorney, with Rackauckas trying to fend off a challenge by Spitzer, his former heir apparent before they had a bitter falling out in 2010 that also involved Schroeder. She also has been considered a potential successor to Rackauckas, should he win re-election and step down before his new term is up or not run again in 2022.

Both Rackauckas and Spitzer courted Nicholas, who has at various points been a financial supporter of each of them.

Spitzer seemed to have the upper hand at first, working as an advocate for Nicholas’ Marsy’s Law campaign in California. But they were reported to have had a falling out several years ago.

Nicholas and Fargo were arrested in Las Vegas on Tuesday, Aug. 7 on suspicion of drug trafficking and were later released from custody. As of Monday, about two weeks later, the Clark County District Attorney’s Office had not filed criminal charges.

A status check on the filing of criminal charges is scheduled for Sept. 5 in Las Vegas Justice Court, according to Clark County DA and court officials.

Nicholas’ attorney in the Vegas matter, David Chesnoff, has told reporters he has been conducting his own investigation and “will address the facts in court.” Chesnoff didn’t return a phone message Monday seeking comment through his assistant.

Las Vegas police didn’t immediately respond to a message Monday noting the 2008 seizure of Nicholas’ plane and asking if any of his property was seized in connection with their current investigation.

The Marsy’s Law ballot measure Nicholas has backed in Nevada is on track to appear on the November ballot.

Lombardo runs the Las Vegas Metropolitan Police Department, which arrested Nicholas on the alleged drug offenses and is conducting the police investigation.

Wolfson’s office is in charge of whether to file charges against Nicholas, and if so, which charges to file.