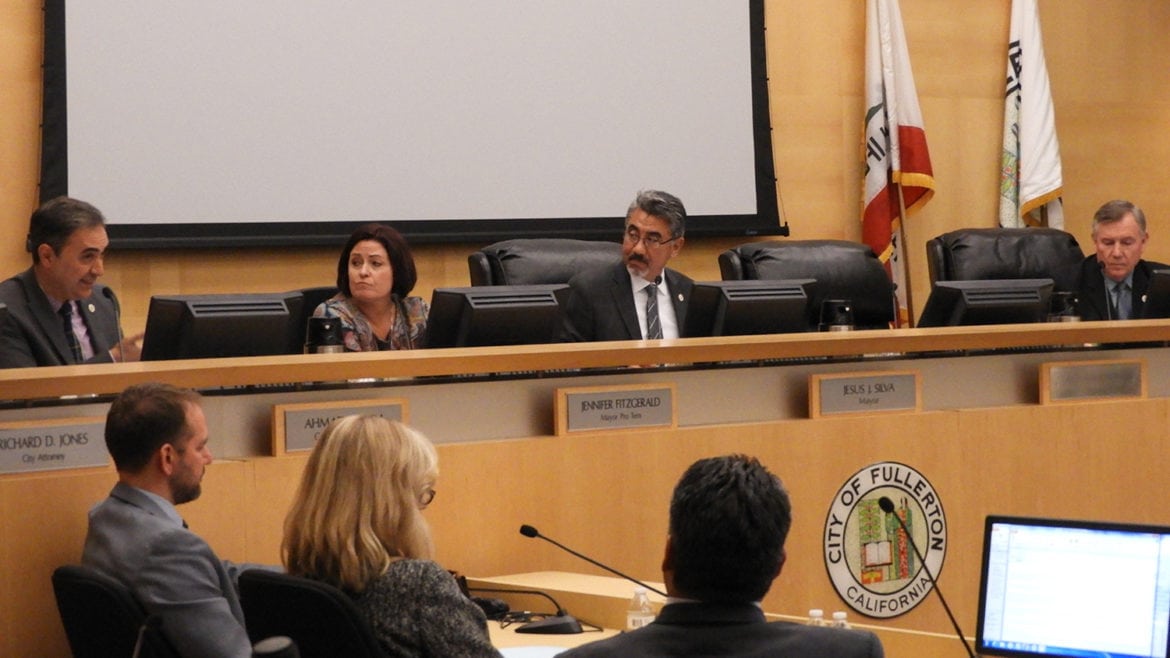 The Fullerton City Council discussing how it will fill a council vacancy at the Dec. 18, 2018 meeting. From left to right: Ahmad Zahra, Jennifer Fitzgerald, Jesus Silva and Bruce Whitaker.

Fullerton residents will have to wait until at least Jan. 15 to find out if a City Council vacancy will be filled by special election or appointment after the current four-member council deadlocked on the issue.

“Appointments happen at various levels. Governors appoint U.S. Senators to fill vacancies for instance,” Mayor Pro Tem Jennifer Fitzgerald said during the Dec. 18 meeting. “The biggest reason for me to be in favor of appointment is the time we will be without full representation for this city. So eight months would be the time we would be without the full council.”

Newly elected Councilman Ahmad Zahra said his decision was “contingent upon making sure the appointment process is fair and open and transparent.”

Mayor Jesus Silva and Fitzgerald moved to fill the Council vacancy by appointment, while Councilman Bruce Whitaker and Zahra wanted to leave the decision to voters. Motions were made for both options and were deadlocked 2-2 each time. A third motion, pushing the decision back to Jan. 15 was passed by the council 3-0, with Zahra abstaining.

City Manager Ken Domer said council members will have to decide where to pull the money from.

According to state law, the Council has 60 days to fill its vacancy by appointment or call for a special election. After that two-month period passes, a special election will automatically be held. The city has until Feb. 2 to make a decision.

Fullerton’s district elections stem from a 2015 lawsuit against the city by the American Civil Liberties Union and Asian Americans Advancing Justice, which claimed the at-large voting method disenfranchised minority voters.

Silva was first elected to the Council in 2016 and Fullerton’s first district elections in 2018 were for districts 3 and 5. Silva had two options: run against Sebourn for the 3rd district seat or finish his at-large term that expires in 2020 and wait until 2022 to run again. Zahra won the district 5 seat.

The Orange City Council is facing a similar situation after Mayor Mark Murphy won the mayor’s seat in November, vacating his at-large City Council seat. Since the city still uses at-large elections and has an elections result list from a citywide vote, many residents urged the Council to use the results during the Dec. 11 meeting and appoint third place candidate Beatriz “Betty” Valencia. A man pulled out a knife during the meeting and was arrested by Orange Police Department. The Council hasn’t decided if it will appoint or hold a special election yet.

In Fullerton, Whitaker said since the city now holds district elections, people only get to vote for one council member every four years and a special election for the vacant at-large seat is important.

“So now we have a very precious vote that only happens once every for years … that being the case, to argue about the cost I think is fairly beside the point,” Whitaker said. “It is far simpler, I think, to trust in the will of the voters.”

During public comment, the 26 residents who spoke were split on the issue. Some said the Council should hold a special election to avoid any potential cronyism, while others said it’s crucial to fill the vacant seat as quickly as possible to prevent Council deadlocks.

“I think it would be best to have a special election. There are some opportunities to do it as cost effective as possible and I think those are fair and reasonable and I think that is probably the best course of action,” Sebourn told the council.

Former Councilwoman Jan Flory threw her name in for appointment.

“In ordinary circumstances I also would be asking for a special election, but I did not have any idea that the special election would be as expensive as it was going to cost,” Flory said, adding that during her time on the council “there has been no scandal, no DUIs, no accusations of conflict of interest or anything like that. I think I have been a collaborative and collegial representative. And I think I have a track record that represents that.”

“$300,000, $200,000, whatever the cost is when you’re talking about managing bureaucracy of $100 million a year is peanuts. There is a cost to democracy, big deal. There’s a much bigger cost to cronyism. I’d pay the cost for democracy gladly, every time,” Paden said.

There was some dispute among council members during deliberations about what it could meant to explore an appointment process.

Fitzgerald suggested they put applications on the city’s website, similar to the appointment process city boards and commissions go through.

“And by de facto, if we don’t appoint someone within 60 days of calling it, it goes to a special election,” Fitzgerald said.

“So for that reason, I can’t be supportive of the current motion (appointment process),” he said.

Fitzgerald responded and said the process would be open and transparent to the public.

“I would just reiterate that we get U.S. Senators who are appointed when vacancies occur. This is not unique to Fullerton … everyone will get to see how the sausage is made, so I’m sure in this town everyone will be interested in that.”

Silva said while he could support calling a special election, but first wants to see if the Council can find someone to fill the vacancy.

“I don’t mind a special election and I’m all for that if we can’t come up with someone,” Silva said. “I’d like to give us the option to go through the process of interviews to see if there’s someone out there.”

But Zahra took issue with that approach.

“The issue I have with that, Mr. Mayor, is that we, at that point, are deciding on individuals. So the special election would be contingent on the applicants and not the philosophy that we hold,” Zahra said. “It is about do we give this opportunity to voters to decide versus us.”

Fitzgerald refuted Zahra and said there’s more to the issue than how to fill the vacancy.

“I’m sorry Councilman Zahra, that’s not the only debate we’re having up here. The debate we’re having is do we want to wait eight months and have these kinds of deadlocks, potentially, while we hold a special election,” Fitzgerald said. “There aren’t two of us on the side of voters and two of us against voters. That’s not what’s happening here. It’s a debate over how are we going to get things done over the next two years.”

Whitaker said public feedback leading up to the Jan. 15 meeting will help the Council make a decision.

“Even through the holidays, I’m quite confident that we will receive a great deal of feedback … and we will be much more prepared come Jan. 15 to know where to head from that point,” Whitaker said.