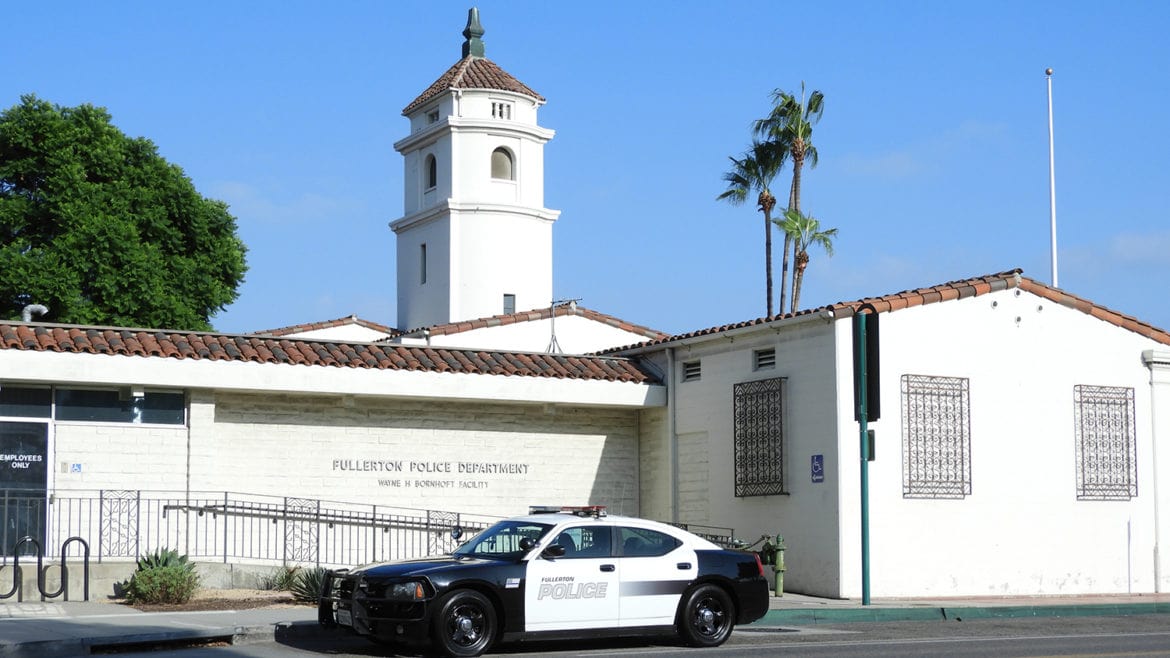 A view of the Fullerton Police Department, across the street from City Hall taken Sept. 4, 2018.

Fullerton police officers, corporals and sergeants could get raises after the City Council decided the city needs to do more to keep experienced officers on the force, instead of losing them to other departments at the current rate.

“There was a young man that I had coached basketball in high school. He was an officer here and when he decided to move to another department, he said ‘I’ve got a growing family I got to take care of,” said Mayor Jesus Silva during the Tuesday, Sept. 17 meeting. “We have to keep them. We can’t train them here and after five years they’re off to greener pastures, if you will.”

But the city has been struggling to improve its revenue for years and Councilman Bruce Whitaker said the raises are unsustainable in Fullerton’s current economic climate.

“There is that level of what you can afford as well. In looking at something like this and looking at the year to year this approval would create, I just find that it’s unsustainable,” Whitaker said.

The Council voted 4-1 on an agreement letter that will come back Oct. 1 for final approval by the Council. Whitaker dissented.

If the proposal gets final approval, all 129 police officers, corporals and sergeants will get a 2.5 percent raise beginning Oct. 19 and two more salary levels will be added to the current six. The department currently has 67 officers, 41 corporals and 21 police sergeants.

The addition of a level 7 salary, also starting Oct. 19, increases maximum pay by 5 percent and the additional of level 8 increases it by 2.5 percent beginning July 2020.

During the staff presentation, Human Resources Director Gretchen Beatty said the city will be eliminating police positions Fullerton has already budgeted to pay for the increases.

“So we talked talked to the police chief and the police chief endorsed the idea … that no matter what kind of efforts we put into place to try to fill all the vacancies, we would always be chasing the vacancy rate,” Beatty told the Council.

“We are proposing, in this side letter, to unfund 10 of the vacant police corporal positions. That is, take them out of the budget for the current year for an unknown period going forward,” she said, adding an additional six vacant corporal spots will be downgraded to officers.

Whitaker, the only Councilmember to criticize the move Tuesday night, said the city is trying to do more with less.

“While there might be the desire to say let’s stop the turnover and let’s develop more experienced officers. I have real trouble the idea of, ‘gee we’re understaffed, but we’re going to get by with less staff,’” Whitaker said. “And we’re still going to be paying at a level that other agencies are going to be luring away our experienced officers. That sounds like we’re not bailing out the boat fast enough.”

The Fullerton Police Department has been losing employees to higher paying jobs at nearby departments for years, according to the staff report and supplemental documents attached to the agenda. The department has lost 28 experienced officers since July 2015 and four of its sergeants have more than eight years of experience and stay on the force for an average of 16 years.

But the average length of service for police officers is 2.9 years, according to the agenda documents. More than one-third of the 67 police officers have less than two years of experience and 51 are under 30 years old.

City Manager Ken Domer told Voice of OC the only way to fund the raises is to eliminate 10 vacant corporal positions and move six to officer classification. The budget currently allocates funds for 54 corporals, but 13 are vacant and three are “underfilled” with police trainees.

“We’re about 18th in pay, but we’re also the sixth largest city in Orange County. So our pay is clearly not where it should be,” Domer said. “We had to do something and we have to be competitive because it costs a lot to train folks and if you lose them, you lose money. You’re losing that investment.”

Other cities like Westminster, Santa Ana and Garden Grove have faced similar retention and recruitment issues. All three cities had to raise sales taxes in order to pay for the raises and increased costs to retirement benefits.

Santa Ana raised its sales tax to 9.25 percent after voters approved the measure in 2018 and was described as a “homeless prevention” measure on the ballot. The move is expected to increase revenue by $60 million, but the City Council approved $25 million in police raises in February in order, it said, to keep the department from bleeding employees.

Two Santa Ana Councilmembers, Juan Villegas and Ceci Iglesias voted against the biggest raise for the city’s police in a decade because there wasn’t enough money in the budget to cover immediate increases. Their votes led to a stalled recall effort against them.

Garden Grove’s police raises turned out to be more than double what staff projected as a $3.1 million increase in April. It turns out the raises will cost $6.4 million over the next three years. The city’s sales tax is at 8.75 percent.

Fullerton doesn’t have to raise taxes for its police raises and will instead rely on eliminating 10 vacant police positions and reclassifying three corporal positions to officers, which lowers the pay scale.

He compared Fullerton to Orange because the two cities are roughly the same size.

“We have commercial nodes, like Orangethorpe (Avenue) and Harbor (Boulevard),” he said. “So we’ve always been sales tax deficient. We are an older city — over 100 years old.”

Domer said the sales tax struggles can be traced back to city planning that revolved around the aerospace industry in the 1950s and 60s, when city leaders at the time focused city planning around a mostly residential city.

“Back in the 50s, 60s, we had the major aerospace companies. So at the time when the people were planning out our roads, they decided we wanted to be a bedroom community … Placentia has kind of the same issue,” Domer said.