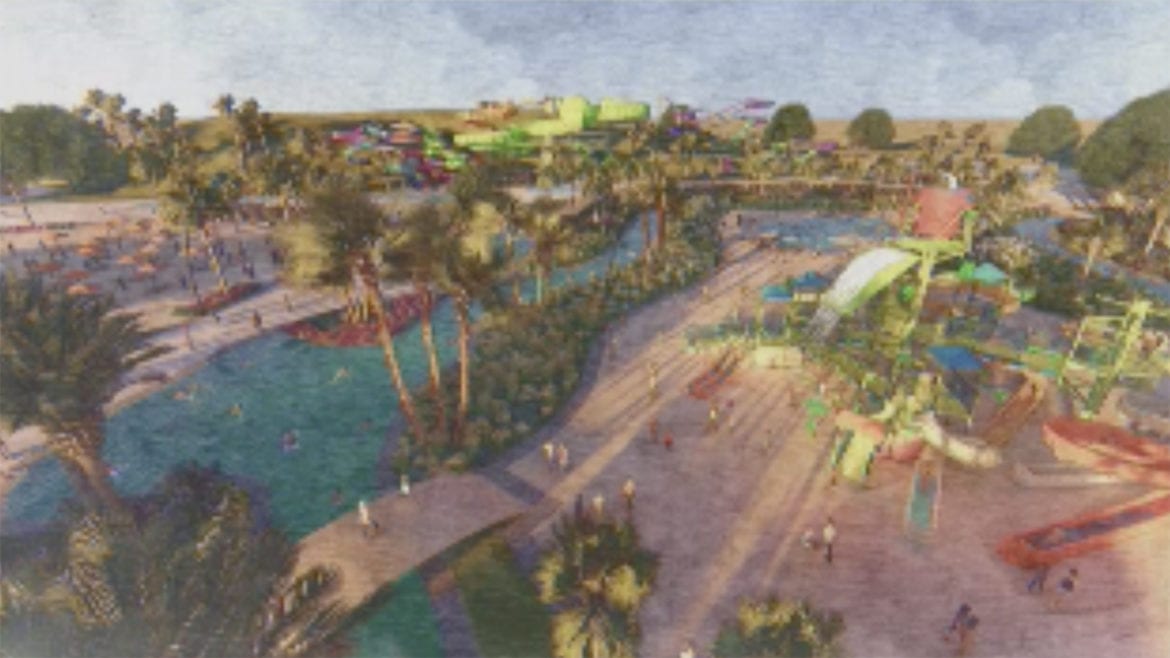 A rendering of Wild Rivers provided at the Irvine City Council meeting on April 28, 2020.

The Wild Rivers theme park is returning to Irvine, nearly a decade after the original park closed in 2011, building a brand new complex in the Orange County Great Park.

The city will receive 4.5% of the park’s annual gross revenue as a lease payment, and if the park remains closed for the summer or underperforms, the city is still set to receive a lease payment of $550,000 for that year.

The park only pays whichever cost is higher for that year, and the annual lease is expected to bring in anywhere from $550,000 to $1 million according to a report prepared by city staff.

The city and Wild Rivers have been negotiating the lease agreement since 2017. Originally, the water park was set to be built in the southeast of the park, in one of the few portions still managed by the US Navy.

As the former site of the El Toro Marine Corps Air Station, the Navy cannot turn over the land until it has cleaned up all potentially hazardous materials from the area, a process that is still ongoing over 20 years after the base closed.

After the council was informed that the proposed location was still unable to be transferred in November 2019, city staff suggested they move the water park to a 20 acre site right in the heart of the Great Park, at the intersection of Skyhawk and Great Park Blvd.

The entire council unanimously endorsed the new site and lease agreement, stating their excitement that the water park would finally begin construction.

“I can’t say how exciting it is to get to this point, we’ve been talking about this for years,” said Mayor Christina Shea.

“We’ve worked so hard to find the right spot,” said Councilwoman Melissa Fox. “We have a major amenity in the heart of the park, and the beauty of Wild Rivers is the history and the love that everyone in our county has for this amenity.”

Wild Rivers will pay for the construction of the water park, while the city will pay for and maintain a parking lot with over 1,200 spaces for Wild Rivers use during the summer, but it will be managed by the city the remainder of the year.

The staff report was unclear over who would receive the money from parking fees, only stating that it was the city’s responsibility to build the parking lot.

The only addition to the lease from the council came from Shea, who asked that a traffic report be completed and requested that similar requirements be included on all future Great Park lease agreements going forward.

“When we’re looking at how the park’s getting developed I think it’s important that all the users we’re approving have something in the approval talking about traffic flow,” Shea said. “We want to make sure there aren’t a ton of impediments.”

Councilwoman Farrah Khan, chair of the Great Park Board, raised some concerns about the water park’s new location, saying that she was worried an attraction that was closed for 2/3s of the year would break up the continuity of the Great Park.

“I’m all in favor for Wild Rivers to come back to Irvine,” Khan said. “But we want people to be able to walk from one area to another, and how will this look when we’ve got his major component that’s closed?”

However, Shea said that in conversations with Wild Rivers management, they indicated they were hoping to keep the park open for events during the other months of the year.

“I don’t know if that will work but I know they want to keep it open more frequently,” Shea said.

The Wild Rivers park is one of the first major lease agreements negotiated in the Great Park, and according to city staff similar future lease agreements will help pay for the annual maintenance of the park’s amenities.

With the approval of the lease agreement, the next step will be FivePoint Holdings, a developer partnered with the city, removing any remaining portions of the El Toro base in the area and building necessary infrastructure.

That backbone infrastructure is paid for by special taxes from Great Park homeowners, who pay an additional property tax to help finance the construction of the Great Park.

After that is removed, Wild Rivers is projecting it will take them roughly 8-10 months to finish construction of the water park even with restrictions due to the coronavirus.

According to city staff, Wild Rivers has a plan for construction to continue with a reduced workforce to comply with social distancing orders.

“This has been a very long journey and it would have been impossible for us to reach this point without all of our supporters,” Riedel wrote. “Thank you.”