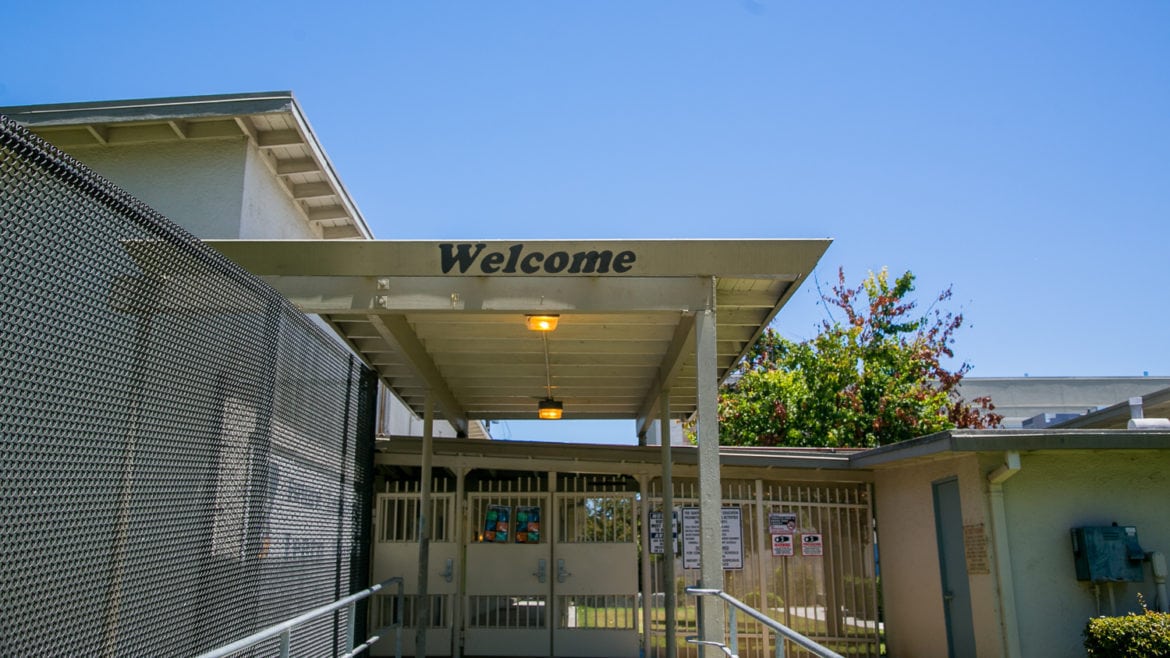 The entrance to Wilson Elementary school in Santa Ana on July 12, 2020.

The Orange County Board of Education is hosting a special meeting Monday evening, where officials are expected to recommend that schools return in the fall — without implementing the use of face masks, social distancing or reduced class sizes.

{Read the followup story out of the Board of Education meeting.}

The board of education panel recommendations apply for all ages between kindergarten and 12th grade, and state that children represent the lowest risk and that as a result, major changes will not be implemented.

The recommendations also sought to give parents options, calling remote learning an “utter failure,” and allows parents to send their children to a new district with every day in class instruction.

The recommendations are being sent out as many school districts across the county are meeting to determine plans for whether or not students will return this fall.

One of the experts on the panel – which included a county supervisor and the head of Orange County’s Health Care Agency – was quoted anonymously as saying, “This is a disease that kills our most elderly and spares our children. It may sound callous, but would we want it the other way around?”

“Requiring children to wear masks during school is not only difficult – if not impossible to implement – but not based on science. It may even be harmful,” the board’s report read under its recommendations.

A lower section of the report linked social distancing with harmful effects on children.

“Because of the established link between social-distancing and child harm, we cannot support extraordinary efforts aimed at social-distancing at school,” the report said. “Mandatory masks may well lead to a spike in childhood behavior problems such as learning disabilities, anxiety disorders, and depression to name a few.”

“We have hurt hundreds of thousands of more children than we have helped,” said Dr. Sherry Kropp, one of the panelists, in the report.

The report also spoke out against distance learning, calling it an “utter failure,” and said that school districts that were “unable or unwilling to reopen schools in a manner that resumes a typical classroom environment and school atmosphere,” should help parents transfer their children to different districts where those opportunities were offered.

“(Distance learning) produced irregular attendance by children, and teachers simply (generally through no lack of effort) unable to manage distracted children in multiple locations,” the report said. “Its reliance on parental oversight is also a fatal weakness.”

Board of Education Meeting

NOTE: The Zoom meeting is full (capped at 1,000 attendees). The meeting is viewable on YouTube: https://bit.ly/2Oks1BR.

Public Participation: Submit a speaker card with your public comments to ocbe@ocde.us – comments send before 10 a.m. July 13 will be read during the meeting by a staff member. Comments sent after 10 a.m. but before the meeting will be added to the official transcript but not read aloud. Speakers will fill in their name and select if they want to address the board during general public comments and are then asked to attend the meeting via Zoom.

The recommendations come as many school districts are approving their back to school plans, many of which feature an all online track and a hybrid track that would see students at school part time.

Institutions of higher learning in the area, like the University of Southern California and Cal State Fullerton, have largely embraced online instruction for the Fall semester.

The Orange County Board of Education guidelines also fly directly in the face of the proposed measures from the California Department of Education, which released its recommended guidelines for reopening last month.

“(California Department of Education) recommends all staff and students should wear cloth face coverings or face shields while at school or on a bus, and maintain 6 feet of physical distance during school activities,” written on the first page of the state’s guidebook to reopening schools.

The group continues to update its guidelines, with the latest update available here.

After the Voice of OC article explaining the Board’s recommendations was published, the Orange County Department of Education distanced itself from the Board’s proposal, emphasizing the use of social distancing and face masks.

“The five-member OC Board of Education, which has separate responsibilities, is hosting today’s meeting to discuss a white paper with alternative recommendations,” the department said in an email to Voice of OC. “The board majority’s recommendations are not binding.”

“We remain 100 percent committed to following and sharing the guidance of the California Department of Public Health and the Orange County Health Care Agency.”

The Board’s responsibilities, as listed on their website, include informing the community about the actions taken by the department, and they also control the annual budget of Orange County’s Department of Education.

A change.org petition has already gathered over 27,000 signatures as of Monday afternoon calling for the county to follow state guidelines.

Early Monday morning, flyers for a protest outside the board’s offices began circulating, calling for attendees to wear masks and social distance.

Fernando Deveras, the protest’s organizer, said his primary goal was to raise awareness on what the Board’s actions would be and that he also disagreed with their policy of only allowing 30 minutes for public comment.

“I live in Santa Ana, and we had our city council take down phone in comments and really try to shut people’s voices down. And even when people came in, it felt like they were just ignoring what the people wanted,” Deveras said in a phone call with Voice of OC. “I saw something similar happening when they said they’d be taking email comments, so I wanted to make sure people knew what the Board was doing.”

“If we can take it to the streets and let them know they have people watching it’s a powerful statement.”

Some of the panel’s other sources also explicitly recommended guidance that they chose to go against multiple times, or featured contextual details that were left out in the county’s presentation.

The study directly quoted an NPR article discussing child care centers that had remained open in New York, an early virus hotspot, and how those centers had not seen any virus outbreaks.

But in that same article, NPR broke down how adults and children at those facilities implemented strict social distancing protocols, including breaking the kids off into small groups and keeping them separate from one another, and that face masks were mandatory for all staff and kids.

The report also extensively referenced and quoted from guidance released by the American Academy of Pediatrics, using their guidelines to discuss how children and adolescents are much less likely to spread the virus.

But that same study, which was attached to the county’s report, advised face coverings for elementary school children “when harms do not outweigh benefits,” and said that desks should be placed three to six feet apart if feasible.

It also endorsed the use of masks in all secondary schools, and said that physical distancing could have a greater effect there.

Sign up for your choice of free Voice of OC email newsletters, including the option to receive emails for just stories related to Education.

Wagner has been one of the leading voices on the board opposing the mandatory nature of the mask order imposed by former health officer Dr. Nichole Quick before she resigned last month.

That panel previously hosted a special meeting last month to hear from members of the public, with over 1,000 people in attendance either online or in person hotly debating whether or not children should return and what guidelines should be put in place.

The board will only be allowing 30 minutes for public comment, limited to three minutes per speaker, and will start at 6 p.m. Monday.

Correction: An earlier version of this story said the meeting started at 10 a.m., which is the cutoff time to submit written comments. We regret the error.