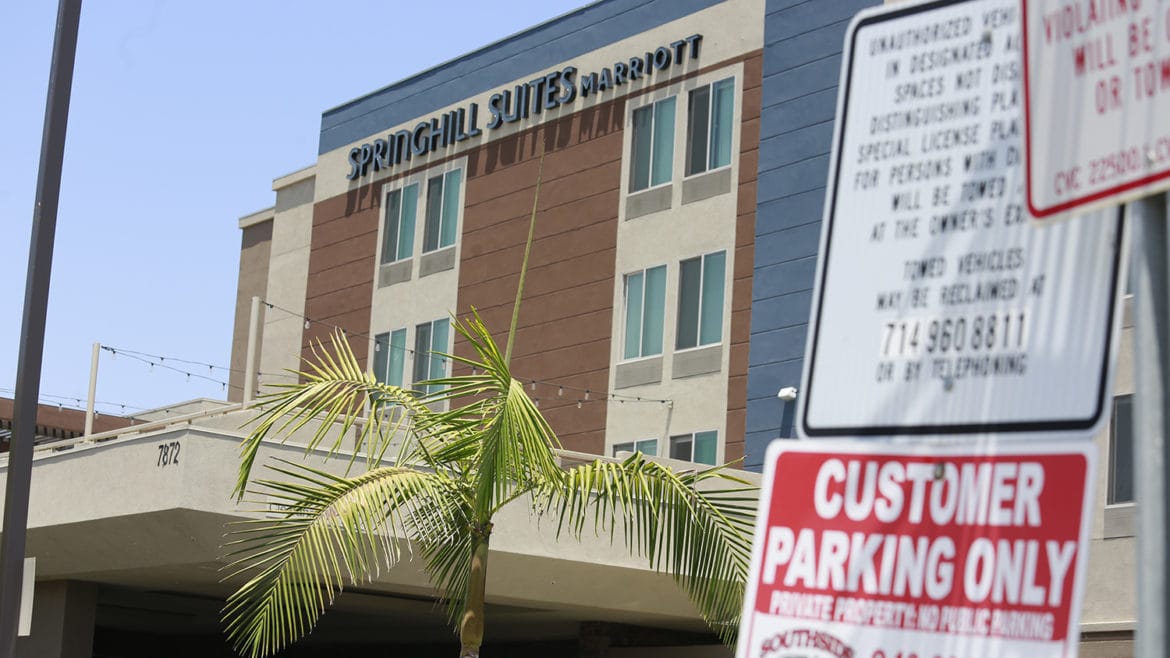 The Springhill Suites in Huntington Beach, which Orange County is leasing for temporary homeless housing during the coronavirus pandemic, on June 30, 2020. County officials are looking at potentially buying motels or hotels for permanent homeless housing, though no particular properties have been identified publicly.

Orange County officials are moving forward on efforts to buy local motels and convert them into permanent housing for homeless people with support services, with county supervisors signing off Tuesday on requesting $60 million from the state to pursue such projects.

The effort comes as the county is sheltering hundreds of homeless people at local motels that are leased as part of the state’s Project Roomkey program to slow the spread of coronavirus among homeless people. In June, the state Legislature and Gov. Gavin Newsom included $600 million in funding in the new state budget to buy motels for the housing effort, dubbed Project Homekey.

Orange County’s efforts have been strongly backed by Supervisor Lisa Bartlett, who told Voice of OC on Tuesday she’s “thrilled” about the county applying for the $60 million.

“If awarded, it means the county can purchase existing properties in areas of the county that are appropriate for Project Homekey and convert them to permanent supportive housing which will help reduce homelessness and give individuals served the greatest opportunity for success,” said Bartlett, who’s been advocating for such funding for months since the earlier days of the coronavirus pandemic.

A president of the California State Association of Counties, Bartlett has been representing counties across California in discussions with Gov. Newsom.

County officials have said they’re actively working with their real estate representatives to prepare for possible motel purchases in the future. So far, they haven’t announced any cities or properties they’re considering.

OC supervisors didn’t discuss the motel housing effort at their meeting Tuesday, where they authorized county staff to submit the application. It now goes to the state’s housing department, along with applications from cities and counties across the state, for a decision on who will get how much.

Homeless advocates and county officials have welcomed the infusion of funds as an opportunity to help end homelessness.

“It’s a great opportunity. We meet every week to discuss that exact issue. We are looking at the motels that we are currently using and what we could potentially purchase,” Jason Austin, who oversees the county’s homelessness efforts as the director of care coordination, told Voice of OC in an interview earlier this month.

“There will never be a cheaper time to buy these buildings,” said Brooke Weitzman, a leading lawyer for homeless people in Orange County. “Now is the moment that Orange County needs to act if they’re looking for solutions.”

Orange County has been sheltering hundreds of homeless people through Project Roomkey at motels and hotels who were at higher risk of death from coronavirus because they’re over 65 years old, have underlying medical conditions that put them at greater risk, or have tested positive for coronavirus.

The county’s new application marks a more proactive approach by county supervisors to applying for their fair share of grants for homeless services than in the past.

Last year, a federal judge publicly scolded Orange County officials for missing out on millions of state and federal taxpayer dollars to address growing homelessness by not being assertive enough in preparing for and seeking the funds.

At the time, U.S. District Judge David O. Carter noted other counties – similarly-sized San Diego County and San Mateo County, which is one-fourth the population of Orange County – applied for tens of millions of dollars more in grants than OC.

“San Diego [County] is at $125 million. We’re at $13 million,” Carter told a courtroom full of top county and city officials and members of the public, referring to applications in recent months for state mental health housing grants known as No Place Like Home.

Orange County has a budget of $31 million for its Whole Person Care program, while San Mateo County, which is four times fewer people than OC, plans on $165 million. Alameda County, which has about half the population of OC, received approval for $283 million.

“This is 100 percent matched, by the way,” Carter said of Whole Person Care.

“This county has walked away from hundreds of millions of dollars,” the judge told officials. “We’ve got plenty of money…are you willing to step up and start applying for federal and state monies?”