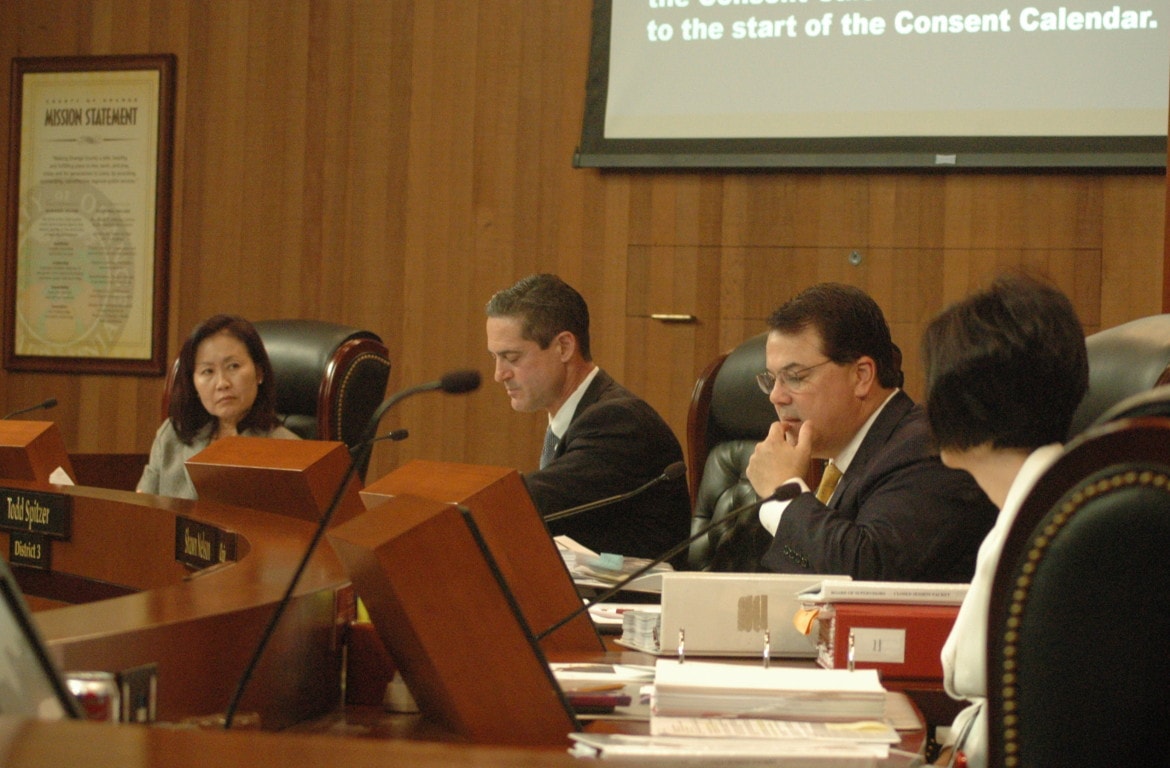 A meeting of the Orange County Board of Supervisors. (Photo by: Norberto Santana Jr.)

Leaders of Orange County’s largest public employees union angrily confronted county supervisors Tuesday, accusing them of trampling on workers’ rights by going back on an agreement to suspend a controversial ordinance so overdue labor negotiations can start.

In a July agreement on ground rules for negotiations, the county’s negotiator stated that supervisors had “decided to suspend” the Civic Openness in Negotiations ordinance – which was largely invalidated by a judge – and that a set of different, mutually agreed-upon rules would replace it.  The workers’ contract expired more than two months ago.

But then last week supervisors decided in closed session, without any public debate or explanation, to reverse that decision. This came despite a recommendation from County Counsel Leon Page to suspend the ordinance, known as COIN.

“I am so profoundly shocked, disappointed, and angered by this board’s recent action to walk all over the rights of county employees,” said Lezlee Neebe, board president of the Orange County Employees Association, which represents about 12,000 county employees.

“You have repeatedly told us, even sat in front of our board of directors, saying you wanted to work with us…If any county employees behaved in this way, we’d be fired.  This is a mockery of justice.”

Supporters say it gives residents a better chance to weigh in on proposed labor agreements and helps prevent taxpayer costs from escalating due to benefit increases for workers.

Labor groups, meanwhile, argue that it singles out employees but not the private contractors who finance supervisors’ political campaigns and account for more than half of the county’s spending.  And they argued – so far successfully – that COIN’s passage last year violated requirements to meet and confer with employees under the Meyers-Milias-Brown Act.

The most dramatic exchange Tuesday came when OCEA General Manager Jennifer Muir refused to stop speaking after being told her three minutes were up.

“No ethics! Where [are] the ethics?” Muir exclaimed as Spitzer stood up, tried to speak, and then walked out of the chambers.  “Every single one of you has the responsibility to stand up and call for a vote!”

As Muir continued, the remaining supervisors – Shawn Nelson, Lisa Bartlett, Michelle Steel and Andrew Do – stood up and walked out of the room.

(Click below to watch a video of the confrontation.)

When the supervisors returned, Spitzer said he had followed the proper meeting protocol by calling a recess and stepping away from the dais.

“Just for the record, we’ve had extensive workshops” on how to conduct meetings, he said.

Spitzer then accused Muir of trying to be someone she’s not: Nick Berardino, the longtime OCEA leader, known for his often confrontational style, who recently retired and handed the reins to Muir.  If someone is new to their job and wants to be someone else, Spitzer said, “I would suggest they be their own personality.”

Supervisors have yet to respond publicly to the workers’ critiques, which were first raised last week after the board decided to keep COIN in place.

In June, a judge with the state’s Public Employment Relations Board ruled that key parts of COIN had to be repealed because supervisors illegally imposed the requirements without giving workers a chance to negotiate first.

The county appealed the ruling, but said in late July that they planned to suspend COIN as part of the ground rules agreement with the union.

(Click here to read the July agreement between the county and union.  The plans for COIN are on the third page.)

Then, in early August, the supervisors’ top attorney warned them that the county could face further legal liability by keeping COIN in place, given that the union could claim the county was improperly delaying negotiations.  Page urged supervisors to suspend the ordinance until a final ruling on its legality.

“Actions taken by the County in accordance with the COIN ordinance remain under attack and do expose the County to potential liability,” he wrote in his staff report.

“Suspension of the Ordinance’s provisions is a matter of urgency.”