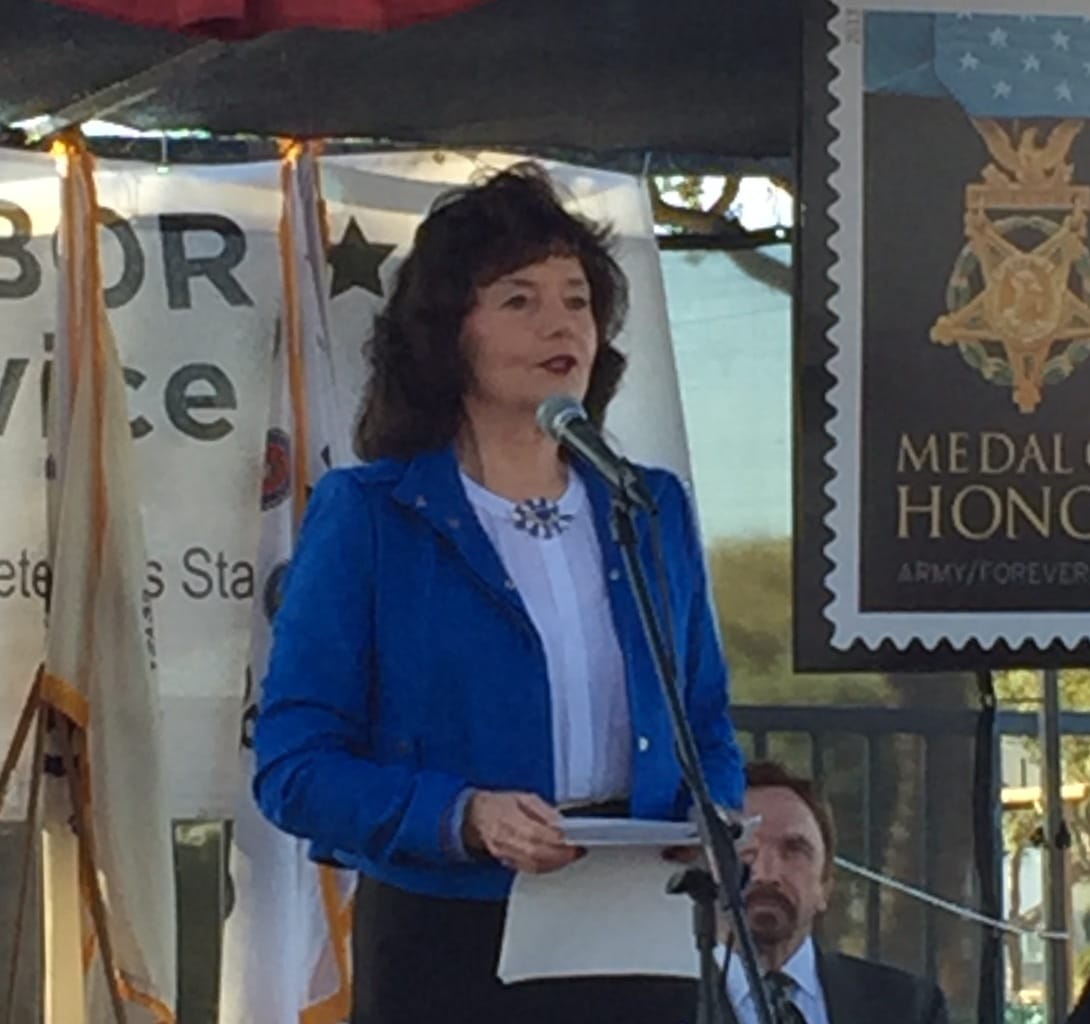 Editors Note: Justice Eileen Moore gave a moving speech to a crowd assembled at the Orange County Fairgrounds on Veterans Day this week. With her permission, we are publishing her speech.

When our soldiers left to go to Vietnam, America was one place, but when they returned, it was something quite different. When the Vietnam War started, hula-hoops and The Mickey Mouse Club had just lost their popularity, and Barbie Dolls and American Bandstand were at the nation’s center stage. Women copied Jackie Kennedy’s pillbox hats. Families put their kids in pajamas and the whole gang went to drive-in movies on the weekends. Soldiers and sailors walking along in uniform were a familiar and welcome sight in America’s neighborhoods.

However, change was in the air.

The post-World War II babies were teenagers and young adults in the 1960s, and they were a force to be reckoned with. Plus, Betty Friedan wrote her book, “The Feminine Mystique,” and the Women’s Liberation Movement began – thank goodness.

The Civil Rights Movement was at its height when the war was at its worst.

Anti-war protesters shouted, “Hey, hey, LBJ, how many kids did you kill today?” and bumper stickers read, “Want to take a voyage to far off places, meet exotic people and kill them?” Sit-ins, freedom rides and other political actions were common. Dr. Timothy Leary told America’s youth to “turn on, tune in and drop out” on LSD. The Beatles were in the country. Girdles were out and miniskirts were in.

In 1965, Congress passed the Immigration and Nationality Act, eliminating the immigration system that had been in force since 1924, which heavily favored immigration from European countries. Thus, adding to the Civil Rights and Women’s Liberation Movements, as well as protests, demonstrations, anti-war rallies, and sit-ins for every other social change, was an influx of people of other cultures from all over the Eastern World. America did not look the same anymore. Cultural understanding and tolerance, at levels never required during earlier times, where suddenly required of Americans if they were to adhere to their core democratic values.

The moment the United States Supreme Court loosened obscenity laws, the film industry took immediate and complete advantage of their new freedom, and Americans learn the cost they would have to pay for their First Amendment. No longer were local communities permitted a say in what was shown on the screen. They could not order distributors to remove offending portions of movies. Sex and vulgarity were portrayed constantly in films, something we have not seen earlier when the old Hayes Code and the Legion of Decency were on patrol.

Besides sex and dirty language, Hollywood also realized how profitable fanning the unrest could be. Films of the time were Dirty Harry and Death Wish, which sent the message criminals were being coddled. M*A*S*H challenged almost every accepted American practice and criticized the military throughout.

I think the American people confused the massive transformations and unrest going on in our society at the time with the Vietnam War. Virtually everything in American society was changing during the Vietnam era, and the public as a whole tended to blame the changes and uncertainties on the war and on our soldiers.

While great changes are occurring, folks tend to be confused and unhappy. But no one can deny, it was a time when Americans were making fundamental adjustments regarding our ideals of freedom and democracy. And changes were indeed made. At the beginning of the war, I don’t remember ever seeing a Black, Hispanic, or Asian officer. By the end of the Vietnam War, I saw many.

While healthy change eventually emerged, our boys returning from Vietnam were not greeted with open arms. Somewhere along the line, “patriot” became a four-letter word.

Soldiers were subjected to taunts on public streets. There were no parades. People spit on them in airports. In fact, more than once over the last decade, I found myself wondering how our Vietnam vets feel when they see more current vets from Iraq and Afghanistan being applauded and praised as they walk through an airport.

Vietnam vets were not welcomed by our traditional veterans’ organizations, and often shunned by veterans of WWII and Korea. Vietnam vets formed their own organization. The motto of Vietnam Veterans of America is “NEVER AGAIN WILL ONE GENERATION OF VETERANS ABANDON ANOTHER.”

While serving as a combat nurse in Vietnam at the 85th Evacuation Hospital in Quinhon, I realized that dying so far away from home was the biggest fear of our boys. Our soldiers in Vietnam only wanted to remember the America of their dreams, their girls, their mothers and apple pie. When they opened their eyes in a hospital, just a tent or Quonset hut really, to see an America nurse standing there, relief flooded their faces. Sometimes tears came to their eyes. All they knew was that part of America was beside them, taking care of them. Wherever they were, they were safe. Often the hand would drift up, just to touch the soft face of an American girl.

When they were told they had lost an arm or leg or an eye, their first words were usually about home, about America. “Charlie can’t get me anymore and I’m going home” was a typical response.

Today’s event represents the parade our boys deserved but never got when they came home. Ours is a wonderful country. When we realize we’ve made a mistake, we try to make things right. Since Vietnam, we have learned that even when we hate a war, we can still love our warriors. So, let’s show them how much we appreciate their service … on the count of three, let’s finally tell our Vietnam vets “Welcome home. ” 1, 2, 3 … “WELCOME HOME!”

Click the play button below or on this link to listen to an interview with Justice Moore at the Veteran’s Day event. To get special access to future podcasts, become a free Voice of OC member.

Voice of OC is interested in hearing different perspectives and voices on civic matters.

If you want to submit a community opinion piece read these guidelines and then send an email to opinions@voiceofoc.org.