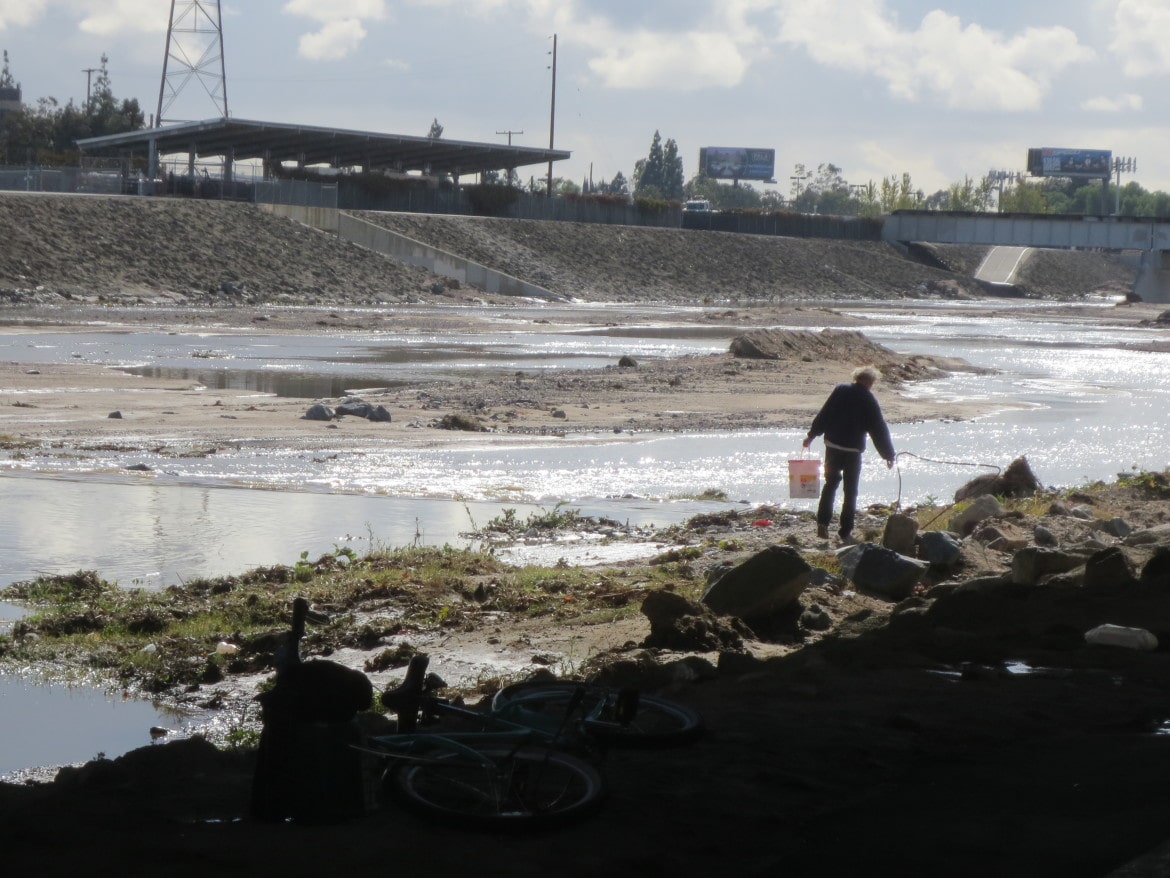 As those storms rolled in early last week, Orange County officials faced a first test of their emergency response plan aimed at protecting people living in the riverbed. The plan failed miserably.

In December, the Board of Supervisors committed $500,000 to an action plan that will ensure “that temporary shelter beds/services for the homeless will be available immediately in the event of severe weather and/or other emergency conditions.”

Recognizing that the county’s cold weather shelter system at the National Armories has the capacity to serve only a fraction of all people who are homeless, the plan contracts out shelter services that would temporarily expand the system by 440 beds to accommodate people residing in the Santa Ana riverbed and flood channels during El Niño storms.

As the first El Niño downpours of the season roared through the county, however, the promised emergency spots were nowhere to be found.

According to people living at a riverbed encampment under the Katella Avenue Bridge in Anaheim, the county’s response had been limited to one Health Care Agency worker who came by before the deluge. The worker distributed flyers with contact information for the usual emergency shelter programs, but made no mention of additional emergency space people could access during the storm.

People living at riverbed encampments by the Chapman bridge and the 5 Freeway in Orange said they had not seen even one county outreach worker before the storms hit.

Residents of a riverbed encampment under the 5 Freeway said that police officers had warned them about the impending storm and had advised them to seek high ground—yet the officers did not assist people in accessing emergency shelter.

As one officer explained, “We have no plan to put people in emergency shelter because we have nowhere to put them. The Armories are bursting at the seams.”

In the absence of government help, many riverbed dwellers sought shelter under the bridges, but space was limited. Others rode out the storms with tarps and tents, set up along the embankments.

Homeless people living in the Santa Ana Civic Center were also trying to figure out how to stay safe and dry. As the storm raged early Tuesday morning, some huddled under the awning of the Santa Ana Public Library, only to be forced back into the downpour by Santa Ana police officers.

Among the people in the area were Bernie Duschame, 57, who lives in the Civic Center Plaza. He said the officers did not give people an alternative place to go.

Local governments did not neglect the emergency needs of everyone, however.

While homeless people scrambled for shelter under bridges, awnings, and hand-made lean-tos, the Orange County Fire Authority, along with several cities throughout the county, were busy providing free sand bags to local housed residents and business owners.

Of course, the county could have avoided the severe weather emergency for people living outdoors by implementing their own Ten-Year Plan to End Homelessness. This plan claims to use a “housing first” approach that emphasizes placing persons who are homeless in safe and affordable permanent housing as an immediate response to their crisis.

Yet this year—year four in the plan—the county has the capacity to house only one in 10 of the thousands of people experiencing homelessness on any given night.

In the interim Orange County officials need to respond to El Niño storms with meaningful action.

Empty promises will not keep people living outdoors safe and dry during storms, and will not protect them from hypothermia and other weather-related health and safety hazards.

And while the county contracted out implementation of the plan to a local nonprofit agency, this does not absolve it of responsibility for the public health and safety of its citizens.

The county needs to provide immediate, responsive, and effective help to those people who have no protection from extreme weather conditions.

Orange County homeless advocates have developed a petition to call upon the Board of Supervisors to fulfill their promise of providing emergency beds for all people living outdoors during inclement weather—and permanent, affordable housing for all.

Eve Garrow is Homelessness Policy Analyst and Advocate at the ACLU of Southern California.

Voice of OC is interested in hearing different perspectives and voices. If you want to weigh in on this issue please contact Voice of OC  Publisher Norberto Santana at nsantana@voiceofoc.org.