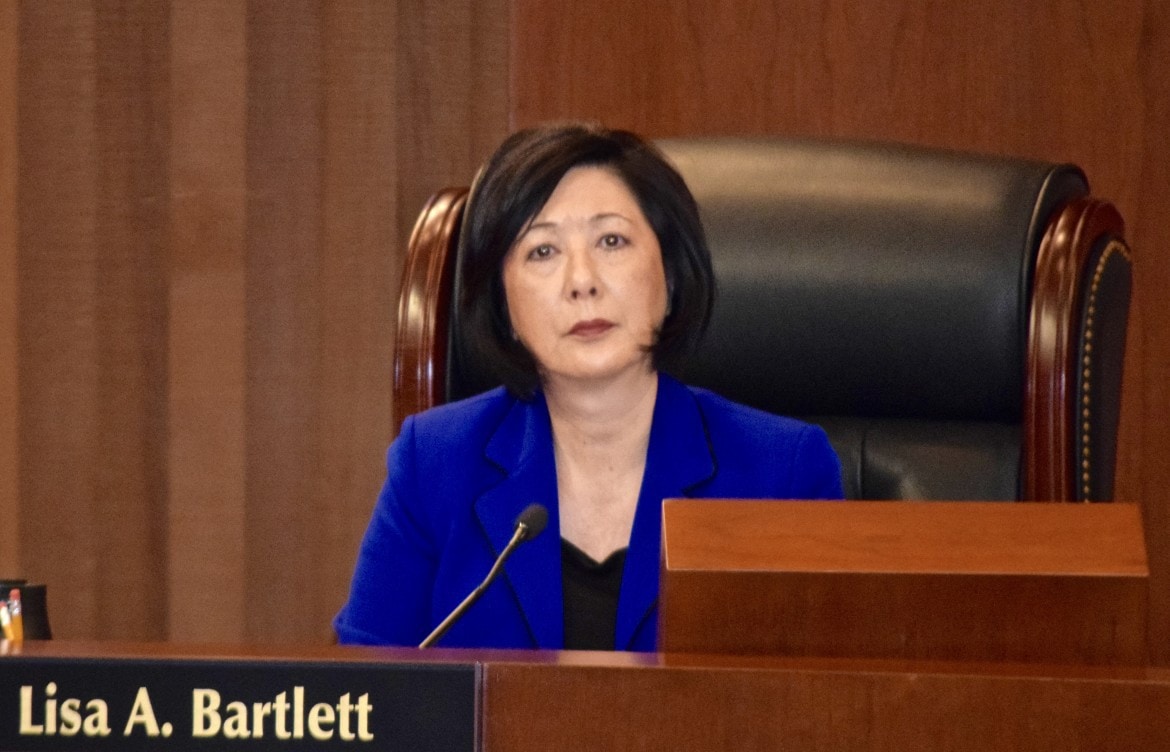 Supervisor Lisa Bartlett took over as chairwoman of the county Board of Supervisors Tuesday and outlined her policy goals for 2016.

“I’m honored to have your confidence” and respect, Bartlett told her colleagues just after they appointed her during their regular meeting.

She listed a variety of initiatives she wants to focus on during the coming year, including homelessness, transportation improvements, and more transparency when it comes to the board’s public meeting agendas.

“I strongly believe that 2016 will be a year in which our board, our employees, and our county will achieve great things,” said Bartlett, who is taking over for Supervisor Todd Spitzer.

As chairwoman, Bartlett will preside over supervisor’s meetings and influence the meeting agendas, such as deciding whether to accept supplemental or late agenda items.

Supervisor Michelle Steel was chosen as vice chair, meaning she would take over the chair duties at times when Bartlett is absent.

The issues Bartlett wants to tackle include:

On the last point, she said she wants to give the public much more advanced notice of board agendas, bumping up the posting of agendas to two weeks before meetings, instead of the current five-and-a-half-days’ notice.

That would also mean earlier staff reports before meetings so supervisors have more time to prepare.

“Right now the board is really squeezed” trying to get things done in five days, Bartlett said. She plans to create an ad-hoc committee of herself and Steel to review the board’s rules and procedures.

Bartlett also made a reference to changing how the board’s appointments are placed on the agenda.

Spitzer said it was an honor to serve as chair and noted progress on a variety of fronts over the past year, including: Buying property for the county’s first year-round homeless shelter and purchase of the shuttered Santa Ana bus depot for homeless services; approval of an ethics commission ballot measure; increased oversight of law enforcement through the Office of Independent Review; and successful negotiation of a new contract with the county’s main employees union.

“I really wanted a team spirit this year,” he said, noting efforts to honor county employees and key community members. “I hope the next chair and vice chair will continue that.”

Visibly emotional, Spitzer reflected on the past year in the context of his 25 years in public office. “This was the best year of my career. Really awesome, and I’m just so appreciative,” he said.

Supervisor Andrew Do had warm words for Spitzer about his leadership on the board.

“You have achieved everything that you set out to do,” Do told him. “You bring passion, knowledge, wisdom to your position.”

Bartlett is the first female board chair since Janet Nguyen held the post in 2010.

She concluded her comments by emphasizing the opportunities that lie ahead through working together as a board and with all of the county employees.

“I just know that collectively, the five of us, working with the 18,000 employees of the county,” are “really positioned” to do great things, she said.