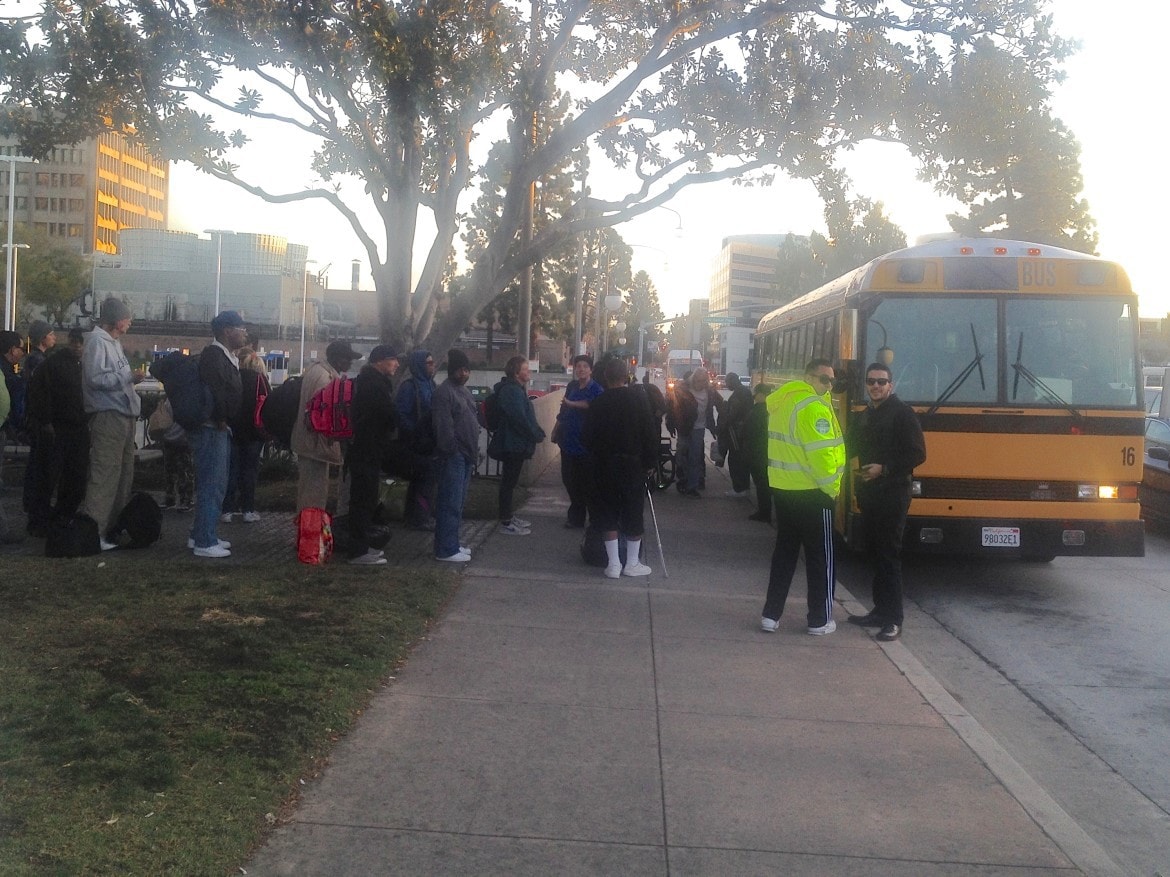 People line up at the county Civic Center to take the bus to the Santa Ana armory shelter.

The big news last year when it came to homeless services in Orange County was that for the first time ever the county had concrete plans for a year-round emergency homeless shelter.

In November, with funding already in place, county supervisors approved a property purchase to build a permanent shelter on Kraemer Blvd. in Anaheim.

Many who work in the trenches on homelessness locally consider this an important step in the right direction. However, a close look at county statements raises questions as to whether the addition of the year-round shelter could actually result in fewer beds for the homeless.

Right now the county uses federal money to pay for two seasonal shelters — one in Fullerton and another in Santa Ana — that operate from October through April and house about 400 people during those months.

That, according to a county staff report, will change when the new shelter comes online.

The county “does not anticipate any further [bidding processes] for an Armory Operator as the program is anticipated to be replaced by Year-Round Emergency Shelter and Multi-Service Center(s),” wrote the county’s top homelessness official, Karen Roper, in a report to the county Board of Supervisors last year.

The report came as the contract for the armory operator, Mercy House, was about to expire, with Roper asking supervisors to continue the armories program for two years “until a Year Round Emergency Shelter and Multi-Service Center are operational.”

So, as Roper described it, the plan seems to have been for the two temporary facilities, which together house up to 400 people each night during the winter months, to be replaced by a permanent shelter that houses a maximum of 200 people.

That suggestion doesn’t sit well with homeless advocates at the street level. Dwight Smith, an advocate who serves the homeless through his non-profit Isaiah House, didn’t mince words when told about it.

“They think they can just eliminate the Fullerton armory…what the fuck kind of idea is that?” said Smith, who noted that homeless people have been killed by exposure when sleeping out in the cold. “People are dying.”

Asked about the current plan, county staff emphasize that the county’s long-term plan on homelessness calls for keeping the current 400-bed capacity, and that any decisions on scaling back the armory beds rests with members of the county Board of Supervisors, the majority of whom have yet to publicly weigh in on the issue.

“The decision to keep the armories program running – including whether to just close Fullerton or both – is a Board decision,” said county spokeswoman Jean Pasco.

“Staff will be providing information about the benefits of doing so as well as the costs and how the armories could integrate with Kraemer in providing different types of shelter options for the homeless.”

Pasco also noted that the county’s 10-year plan on homelessness recommends replacing the armory shelters with year-round shelters but keeping the 400-bed capacity for emergency beds.

It’s unclear how supervisors want the situation to be handled. Messages to all five supervisors yielded an answer from just one.

Supervisor Todd Spitzer said he wants to keep both armories open even after the new shelter is up and running.

“[It’s a] no brainer,” said Spitzer, who represents the area around the Kraemer shelter site. “We need more resources. Not less.”

When asked about the situation, several homeless people who use the armory agreed with Spitzer, saying that that while a year-round shelter is an excellent idea, the number of available beds should not be reduced.

Charles Blackman, who was waiting for the Santa Ana armory bus last week, said the number of beds should “definitely” not be decreased, saying he’s seen the armory at close to capacity before.

“Less beds don’t sound too good, don’t it?” added a homeless man who identified himself as Donald, who said he’s seen the Santa Ana armory at more than three-quarters capacity.

“You’d probably have more crimes if you didn’t” have as many beds, he added, pointing to a greater likelihood of people defecating in the streets and sleeping in the doorways of local businesses.

Eve Garrow, a homelessless policy analyst and advocate with the ACLU of Southern California, noted that there’s an “extreme scarcity” of emergency shelter beds in Orange County, as well as permanent supportive housing for homeless people.

“There’s over a couple of thousand people who are going without shelter on any given night,” Garrow said, based on the county’s homeless counts and the number of available beds.

Another thing that is unclear whether everyone who currently uses the armories will also be able to have immediate access to the year-round shelter.

Under the armory program, any homeless person, as defined under federal law, is eligible to stay the night. And to access the shelter, they wait for a bus at one of two locations: the county Civic Center or La Palma Park in Anaheim.

For the year round shelter, that will change under the county’s plan. Instead of waiting at a shuttle stop, they must first call an “Intake and Bed Reservation Hotline.”

A hotline staffer would then ask a series of questions to determine if the person is eligible to stay at the shelter or should instead go elsewhere.

“If they have an alternate, habitable location where they may stay, they will be diverted from occupying a shelter bed until their resources have been exhausted,” the county’s plan states.

If officials deem the person to be eligible, they’ll then be given a reservation number and told where to wait for a shuttle to the shelter. Homeless people would be on their own to find transportation to the pick-up location, according to the county plan.

“You can’t get on the bus shuttle service unless you have a bed reservation,” Roper said at a county forum in September.

Some advocates have been concerned about this approach, saying the “reservation” process would make it even more difficult for homeless people to access shelter.

Smith, of Isaiah House, questioned why officials call the facility an emergency shelter when reservations are required. “What…kind of emergency room is that?” Smith asked.

Asked about the barrier-to-entry concerns, county officials note that the goal of the year-round shelter is different from that of the armories.

“The goals for the armories – getting people a place to sleep overnight to get out of the cold—is different from the goals for a multi-service center – providing temporary living space so people can be connected with services and programs that will get them into long-term housing,” said Pasco.

She again pointed to the county’s 10-year plan, which says this of the year-round shelter: “Instead of just giving someone a place to stay, this shelter needs to put its residents on a path that will end their homelessness.”

Roper’s statement last year, about the armories being replaced, was made as a way of justifying why the current armory operator, Mercy House, should keep running the armories for a couple of years without inviting other providers to apply.

Mercy House received the armories contract in 2011 after a competitive bidding process, but the contract’s extensions expired last June.

Such an expiration would usually prompt a new bidding process, to allow other providers to apply for the service. But Roper asked supervisors to skip the bidding and award the contract again to Mercy House, given that the armory program would be shutting down.  Supervisors later approved a one-year contract with Mercy House to continue running the shelter, which can be extended.