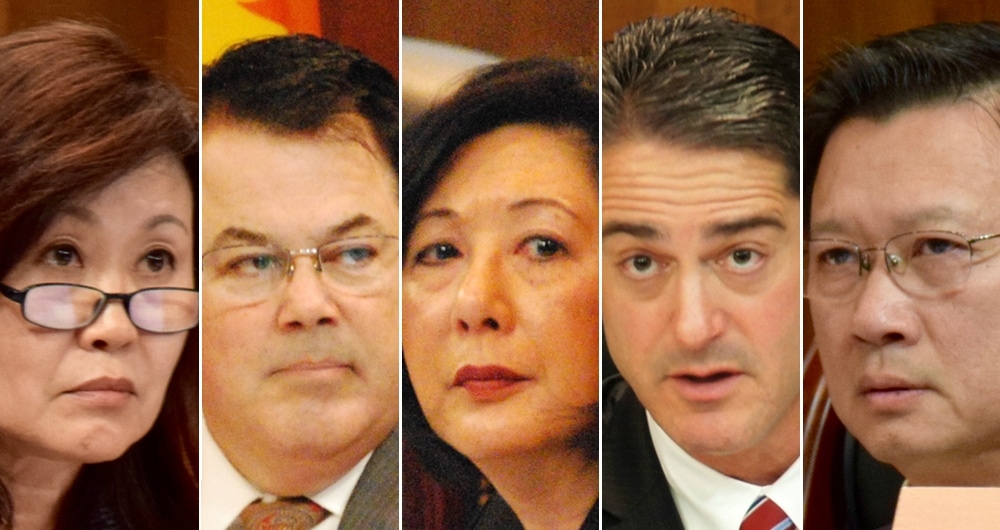 Recently filed campaign spending reports fill out the picture of where Orange County supervisors got their political money last year.

The state-mandated reports show that supervisors raised more than $650,000 in contributions last year alone, much of it from people and companies whose county contract approvals they control, according to a Voice of OC review of the filings.

The supervisors also reported nearly $500,000 in loans to their campaigns on top of the direct contributions.

Below are links to the documents for each supervisor (which include reports for the first half and second half of 2015) and a quick rundown of what they show:

Her fundraising has focused largely on contractors who do business with the county and CalOptima, where she sits on the board of directors. She even sent out a fundraising pitch to county vendors asking for $3,800 each.

As far as county contractors, last year she received a maxed-out $1,900 from the president and CEO of controversial contractor Project Dimensions, Inc., which local boaters have accused of incompetence on the county’s Dana Point Harbor revitalization project.

She also received $1,900 from Sukut Construction two days after she voted to award a $11 million county contract to the firm.

Bartlett will likely have to continue the fundraising, since she started the year with just $10,000 in the bank and over $140,000 in outstanding debt to herself.

Steel, who also was elected in 2014, still owes herself $300,000 in loans to her campaign. She raised $86,000 last year, largely from Korean-Americans, but also some from government contractors.

Steel, like Supervisor Shawn Nelson, has the advantage of having personal wealth she can tap into, with her husband Shawn Steel bringing in at least $300,000 per year from his law firm, according to her financial disclosure for 2014.

Do, who was elected in a special election in late January 2015, raised $300,000 last year, more than two-thirds of which was after he was sworn into office.

His money largely came from Vietnamese-Americans, county contractors, lobbyists and the medical industry.

Do has significant influence over public payments and rules governing the medical industry, as one of two county supervisors (along with Bartlett) who sit on the board of the county’s $3 billion health plan CalOptima, which serves about 780,000 low income and disabled patients.

He has raised at least $39,000 from people and groups in medical industry – including the Monarch HealthCare doctors network, local hospitals owner Prime Healthcare, and many doctors and pharmacists.

Do’s fundraising will no doubt heat up this year, as he faces re-election in a potentially competitive race (he won last year by just 43 votes out of 48,000, or less than 0.1 percent).

He also still has $57,000 in loans he made to his campaign that he had yet to repay himself, as of the beginning of this year.

Nelson, who has been termed-out since his re-election in June 2014, has raised eyebrows recently, as well as legal questions, with his significant fundraising into his termed-out account.

There’s now a more complete picture of how much he raised last year, most of which was when his committee was named Shawn Nelson for Supervisor 2018, which state authorities said was an illegal name.

Nelson raised $105,000 in campaign contributions last year, despite coming out of his final supervisorial election with no debts and $95,000 in the bank.

He’s been raising big money from county and Transportation Authority contractors who need his approval for extensions and new contracts.

Nelson is still debt free and now has over $160,000 in the bank for an office he can’t run for, as of the beginning of this year.

The working theory among many who track local politics is that Nelson is using his lucrative position as a supervisor to build a war chest for a run at a Superior Court judgeship, something he openly covets.

Spitzer, who is running for re-election this year and eyeing a later run for district attorney, dwarfs of his colleagues in the size of his political war chest.

He has more than $1 million, much of it transferred from his state Assembly campaign account but much of it raised since then as well.

With such a large reserve, Spitzer didn’t have to fundraise as aggressively as his colleagues on the board. His total tally between his supervisor account and his Republican Central Committee account was $53,000.

He, too, raised money from county and OCTA contractors, such as AECOM, LAZ Parking, Integrated Healthcare Holdings, Intratek Computing, and Butier Engineering.

Meanwhile, he’s all but drained his Central Committee account, which ended the year with a balance of just $3,000.

Its widely believed that Spitzer will run for Orange County District Attorney in 2018. And even with $1 million in the bank, Spitzer would likely be up against either the current DA, Tony Rackauckas or, a well-funded ally of Rackauckas.

Correction: A previous version of this story said Orange County District Attorney Tony Rackauckas’ campaign announced  that he had raised over $400,000 in one night. This figure appears to be inaccurate, with the actual figure closer to $60,000, according to Rackauckas’ later campaign filings.

Notice something interesting in the campaign filings? You can contact reporter Nick Gerda at ngerda@gmail.com.