On John Oliver’s March 6 show, he devoted 15 enlightening and hilarious minutes to an otherwise sleep inducing topic: “Special Districts.” Describing these agencies as “shadowy ghost government with little oversight and unknown to the public,” Oliver asks, “What could go wrong?”

Plenty, and our own Orange County Water District (OCWD), is a poster child of one such shadowy ghost government. 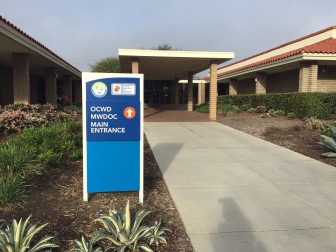 There are 14 special district water agencies in Orange County alone. The OCWD’s 10-member board, manages the Orange County groundwater basin. The basin provides approximately 75 percent of the water needs of 2.4 million residents in 17 cities.

If you couldn’t attend an OCWD meeting but wanted to learn more about your water, you might look for a live or archived video broadcast on the internet as is provided by most municipal governments.

But you wouldn’t find one for OCWD.

In fact, few ( like the Costa Mesa Sanitary District and the South Coast Water District) of the 31 special districts in Orange County video their meetings.   In early 2014, at the behest of activists, Board Member Jan Flory of Fullerton tried to get the Board to approve video streaming. Despite the nominal cost, estimated by staff at between $12,000 and $20,000 per year, the item was defeated 8-2.

There, you would be led to believe there are two board meetings per month, the 1st and 3rd Wednesday at 5:30 p.m. You’d be wrong. Technically, OCWD has between 7 and 10 board meetings per month but never more than 10. Ten is the magic number because the law places a limit on how many $250 stipends each member can earn in one month.

Let’s say you examined the January 20 agenda. Perhaps Item 7, the “County of Orange Adopt a Channel Program” with a price tag of $55,800 caught your attention. You decided to make the trek to Fountain Valley to hear why OCWD should spend rate-payer money on trash and graffiti removal along the Santa Ana River.

At the meeting you might have expected a staff report or board member discussion. You’d be wrong again. That and 17 other items were on the “consent calendar” approved in one fell swoop without a word from staff or board.

But how could these board members not have a single question on 18 items that included millions of dollars in expenditures? 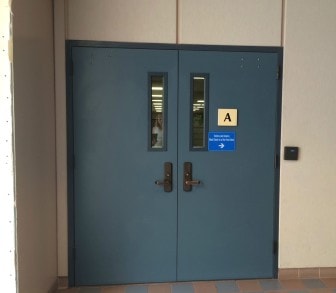 The real board meetings and decisions happen in a cramped conference room, behind uninviting double doors, in a “staff only” area at 8 in the morning.

These more informative board meetings are listed on their web page under the disguise of “committee meetings.” But you wouldn’t have known unless you had opened the committee agenda.

What about the posting of notices required by California’s open meeting laws?

OCWD posts its agendas but they do it inside the building, 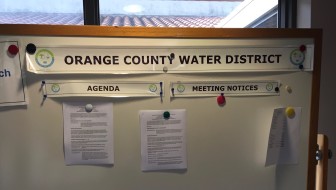 which is inside a gate, which is locked after hours. When evening meetings go late, it is even locked before the meeting adjourns! So much for public access.

Apparently OCWD’s legal counsel isn’t aware of an Attorney General opinion on the matter: “notices cannot be placed in buildings which are locked for some portion of the 72 hours immediately prior to the meeting.”

That no one else has complained or noticed shows how few people pay attention to this “special” district. Ironically, the Board uses this fact as an excuse to vote against video streaming.

So now let’s take a closer look at a committee meeting agenda and whether it comports with notice requirements.

OCWD has structured its “committee meetings” to be composed of 5 members and 5 alternates. If any member is absent, then one of the five alternates becomes a voting member for that meeting. All members who attend sit at the table and all receive their $250 stipend whether they are voting members or not. Most committee meetings last less than an hour, and all include a meal. So attendance is usually high.

I’m not talking about a situation where a city council meets jointly with its planning commissioners. In that case, they are two distinct bodies. The city clerk properly notices both meetings, calls both meetings to order, conducts a roll call for each body, and adjourns each body.

In this case, the OCWD board is meeting with itself. The Board is not the “parent” of the subcommittee. The board is the subcommittee and visa versa. The board secretary calls one roll and, depending on who is coming and going, the voting members are constantly shifting. This is nothing more than a ruse.

This hybrid that OCWD has created is a legal conundrum designed to hide the public’s business from the public. A California Attorney General opinion suggests it is inappropriate.

The fact is, all of the important decisions, meetings with consultants, board discussions and staff presentations, happen at these “committee meetings.” By the time an item gets to the “consent” calendar, it is a done deal. The public is left in the dark without the option of pulling the item from the consent calendar.

If OCWD considers this “strict compliance” with the Brown Act, then you can bet they have no problem violating other areas of the law. And they do, frequently. Such as adding last minute items to agendas that do not qualify as emergencies or even “urgent.” Or discussing items, as they did at Thursday’s Admin/Finance Committee that are not on the agenda, despite a tepid admonishment from legal counsel.

So how do we cast light on these shadowy ghost governments? How do we get more public participation, media coverage, and enforcement of the laws?

I believe that live and archived broadcasting of meetings is the first step in restoring public trust and increasing public participation. That is why, a year ago, I started Livestreaming every water meeting I attend. An iPhone on a tripod can be a powerful tool for change. And it is virtually free.

Why is video streaming meetings important? First, it is convenient for the public, especially those ratepayers who live far from OCWD’s campus.

Second, video is a better documentation tool than audio recordings. Voters should be able to see their elected officials in action, who are the players, the lobbyists, the consultants and staff. With video, you can decide for yourself whether arrogance is a quality you want to reward with your vote.

Third, video provides more complete information. Being able to see a slide presentation as it is given is important to understanding complicated issues.

And finally, it encourages public participation, exactly what is needed in a democracy.

Ultimately the onus is on the public to take its rightful place in governance. For the short term I will continue Livestreaming, but for a permanent solution, you need to write your representative at OCWD and demand that all meetings be video streamed.

Debbie Cook is a former mayor of Huntington Beach who advocates for governmental transparency and public participation.

Correction: A previous version of this story incorrectly stated that none of the 31 special districts in Orange County video their meetings. We regret the error.