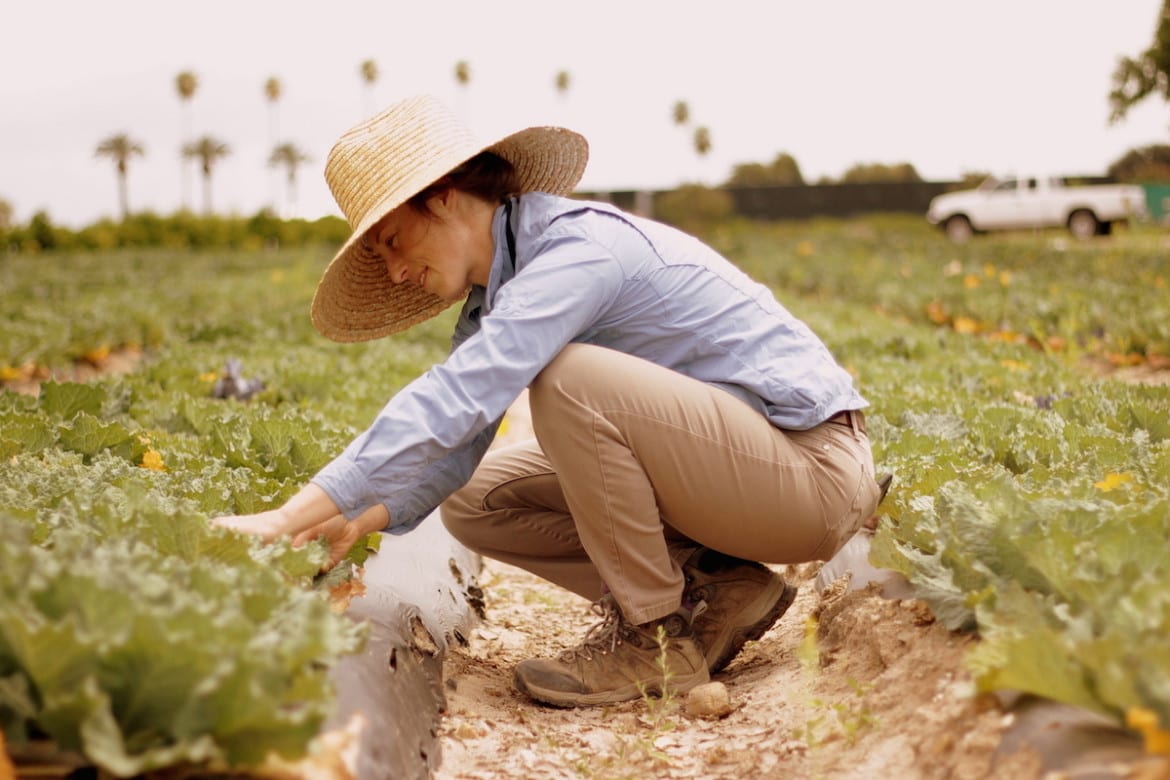 Aditi Mayer for Voice of OC

Katie Fugnetti, program coordinator at the Incredible Edible Farm in Irvine, harvests vegetables at the farm.

On a recent afternoon, a Girl Scout troop of 40 girls arrived for the afternoon shift at the Incredible Edible Farm in Irvine’s Great Park, where hundreds of cabbage rows glistened in the sunlight awaiting their harvest.

A program coordinator at the farm handed the girls gloves and harvesting knives and split them into groups. Some of the girls kneeled over the lettuce heads and used what looked like butter knives to saw through the stalks and pull them from the ground. Others then took the lettuce heads and put them into buckets of water to rinse them thoroughly before arranging them neatly in empty milk crates.

After two and a half hours, the girls place the lettuce-filled crates into the trucks to be delivered to Second Harvest Food Bank in Irvine where other volunteers will sort and distribute the produce to smaller pantries around the county.

The work of the girl scouts on that afternoon is part of a larger effort to get more fruits and vegetables to the county’s food banks. With the help of Incredible Edible Farm and others, the Orange County Food Access Coalition (OCFAC), which formed in 2010, provides fresh produce to nearly 100 food banks.

When someone is relying on a food bank temporarily, sustenance — not nutrition — is the main goal. But since the 2008 recession, many among Orange County’s hungry and homeless populations have turned to food assistance programs as a permanent supplement, said Barbara Wartman, Second Harvest Food Bank’s Director of Marketing and Public Relations.

“Food banking has always been focused on just getting people’s bellies full. But now, the focus really is more on nutritious foods and keeping people healthy,” said Wartman.

The National Health Care for the Homeless Council (NHCHC) in Nashville, Tennessee, found that on an average day 32 percent of homeless people surveyed did not eat any dairy products, 36 percent did not have any vegetables and 77 percent did not consume fruit.

“Malnutrition can lead to a variety of health problems,” said Caroline Gumpenberger, NHCHC Director of Education. “Homeless populations tend to see especially high prevalence of anemia due to iron deficiency, hypertension or cardiovascular disease due to high fat and high salt or low nutrient diets and particularly high vulnerability to infection and injury due to weakened immune systems.”

Grumpenberger added that malnourished children are also at risk for stunted physical and cognitive development.

Paul Leon, CEO and President of the Illumination Foundation – an Irvine-based nonprofit that since 2007 has provided a range of homeless services in Orange County, LA and Riverside – said that nutritional deficiencies are not only extremely common, but they also play a major role in reducing life expectancy.

“The lifespan of our homeless clients is 50 years of age, 33 years younger than that of the general population,” Leon said “Our clients suffer from chronic medical illness that leads to premature death. Congestive heart failure, diabetes and trauma are our clients’ major diagnoses.”

Malnutrition and obesity are common among homeless clients due to diet, he said. “They do have food. But the availability of food most of the time is high in carbohydrates, high in fat, low in protein. It’s cheap, easy food that they can get a hold of.”

OCFAC notes that as a result of integrating more fresh produce into the distribution cycle, produce has made up 38 percent of the demand. The Great Park’s Incredible Edible Farm is also working to keep pace with demand for healthier offerings. The farm now grows 50,000 pounds of oranges alone.

Other crops include lettuce, snap peas, radishes, cauliflower, broccoli, oranges, green beans and zucchini, depending on the season. This year, the farm is expected to produce and distribute over 300,000 pounds of produce to school pantries, soup kitchens, churches and partner groups. These organizations work to place the freshly picked produce onto hungry and homeless people’s plates within two days of the harvest.

OCFAC started making fresher food bank selections available in 2009 when people in a Huntington Beach neighborhood created a solution for the excess fruit hanging on the trees in their backyards. The program, dubbed The Harvest Club, sends volunteers out to pick fruit and vegetables from people’s backyards and donates the fruit to local food banks and shelters.

With OCFAC’s help, The Harvest Club now coordinates about 15 harvests per month across Orange County, and in 2015 donated over 48,000 pounds of produce, enough fruit to feed over 120,000 people.

“One time, I delivered a box of freshly picked fruit to a shelter for youth,” said Lindsey Harrison, volunteer coordinator for the Harvest Club. “The receptionist was nearly in tears because they never received fruit and normally had to put aside a place on their budget to purchase it for their tenants.”

Jackie Grade is majoring in Literary Journalism at the University of California, Irvine