You might have heard that the California Coastal Commission (CCC) has been undergoing “regulatory capture,” where industry, real estate interests, and ambitious politicians have subverted its power by forcing the firing of its Executive Director Charles Lester, and move it toward a more development-and industry-friendly model.

This all happens at the expense of our coast, our communities, and probably very soon, the 401-acre Banning Ranch, the last open bluffs and wetlands along the Orange County Coast.

The first order of business for the new CCC staff?

In a reversal of its October 2015 position, the staff report on Newport Banning Ranch released last week recommended approval of the hotel and housing complex on coastal grasslands, officially protected Environmentally Sensitive Habitat Area (ESHA), and home to the Burrowing Owl among other endangered wildlife.

Who is to blame for the Coastal Commission takeover?

Despite protestations that the firing of Lester was “a personnel matter,” the buck stops with avowed climate crusader Governor Jerry Brown.

He could immediately rescind his four appointments, all whom voted in secret to fire Lester and all with spotty environmental voting records. More on the sordid details later, and the well-enumerated lobbyists actively gaming the rules and regulations in favor of the profit-focused bulldoze-and-build set.  Additionally, the Governor must deal with another appointee from the State Resources Agency whose commitment to conservation is questionable at best.

These political operators work behind the scenes, so let’s take a look at Jerry Brown’s backroom dealer extraordinaire, Janelle Beland. Brown appointed Beland, a communications/public relations type as the Undersecretary of the California Natural Resources Agency in 2011.

How could the woman charged with “protecting and managing the state’s natural, historical and cultural resources for current and future generations” be working to undermine the Coastal Act and limit the power of the Coastal Commission?

Do we have proof?

Well, at the October 2015 hearing on Newport’s Banning Ranch, she may have inadvertently outed herself by stepping into procedural matters regarding the designation of Environmentally Sensitive Habitat Areas (ESHA). It is that very designation that the Coastal Act explicitly protects and now the post-Lester CCC Staff wants to exempt. ESHA designation, the bane of home builders’ and coastal resort designers’ existence, led to the legally-secured protection of much of the Upper Bolsa Chica wetlands.

Moreover, the courts will have to decide the fate of the 895-ocean view homes with hotels and shops at Newport Banning Ranch, given the discrepancy of 2015 and 2016 designations of protected coastal sage scrub and vernal pools, one of the last places in Southern California endangered gnatcatchers and cactus wren, and the aforementioned Burrowing Owl, can thrive.

Why did Ms. Beland, who rarely speaks up at hearings as a non-voting member of the Commission, publicly denounce a biologist from the California Department of Fish and Wildlife (CDFW) for rendering an opinion about a project when asked to do so by the Coastal Commission biologist? Projects seeking to build on coastal wetlands require a Section 1600 Streambed Alteration Agreement, and on that day in October it seems the CDFW biologist was doing her job and speaking on why the application was not complete. The CCC staff report released September 25 first said it was incomplete, but then in a Sept. 30 addendum, said that CDFW decided they didn’t even need to issue a Streambed Alteration Agreement for this massive project.

One has to guess Commissioner Beland was annoyed that this staff member did not get the memo that they had agreed to exempt Newport Banning Ranch LLC  from the requirement.

Now, Ms. Beland, in her remarks, said that CDFW “deemed the application complete 60 days before September 30” — yet CCC was under the impression as of September 25 that the CDFW application was not deemed complete.

Okay, at this point, if you are lost, you are not alone. So I decided to do some digging. I did a Public Records Act request searching the paper trail on how CDFW and the Natural Resources Agency got together to exempt a developer of a massive project from a permit that almost every builder of a project of this size must deal with. And why was the story not straight with Coastal Commission staff? The public has a right to know.

While I am reviewing CCC documents and await information from CDFW, the attorney for California Natural Resources responded thusly: “My client does not maintain documents responsive to this that are not covered by the attorney-client privilege, and therefore has nothing to produce.”

Where does the attorney-client privilege apply when a representative from a major state agency makes public assertions about exempting developers from regulation? Okay, one can only surmise here that Commissioner Janelle Beland has something to hide.

Furthermore, Governor Brown has a slate of commissioners (Wendy Mitchell, Erik Howell, Martha McClure and Effie Turnbull-Sanders) with moral and ethical lapses, as well as just poor performance. These commissioners are at-will appointees and serve at the pleasure of the Governor. They should be replaced immediately. 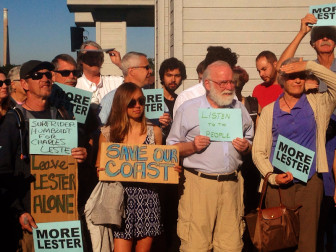 Almost 1,000 activists from all over California converged on Morro Bay in February 2016 to support Charles Lester as head of the Coastal Commission staff. Their calls also went unheeded.

On February 10, 2016 around 200 speakers expressed unanimous support for Charles Lester, who by the way, backed up the claim that the Banning Ranch developer had not fulfilled the requirements for a streambed alteration agreement, and then lost his job a few months later. What about Brown’s appointees ignoring the wishes of 30,000 letter writers, 100 environmental and social justice groups, 35 former Commissioners, 10 members of Congress and 18 California legislators, calling for Dr. Lester to keep his job? Where is their accountability to the public?

Of course, lobbyist Susan McCabe from McCabe & Company has been recently outed in the Los Angeles Times as “the most influential person on the Coastal Commission.” McCabe specializes in Coastal Commission cases with a variety of clients including home builders, a New York hedge fund, a builder of liquid natural gas terminals, a builder of desalination plants (Poseidon), SeaWorld, Pepperdine University, the ports of Los Angeles and San Diego, aging Rock Star David Evans (a.k.a. The Edge), and entertainment moguls Barry Diller and Jeffrey Katzenberg.

McCabe’s go-to Commissioner is Brown’s at-will appointee Wendy Mitchell, herself a paid-lobbyist for the very real estate and energy interests that she is charged to regulate. Her recent vote in favor of a Santa Barbara desalination project involving one of her consulting company clients, Carollo Engineers, is just one glaring example of her conflicts of interest.

Commissioner Erik Howell, another Brown at-will appointee, is the subject of a Fair Political Practices Commission complaint over his support of a Pismo Beach project two weeks after receiving a campaign donation for his Pismo Beach City Council campaign from Susan McCabe’s domestic partner, an employee of McCabe & Co. 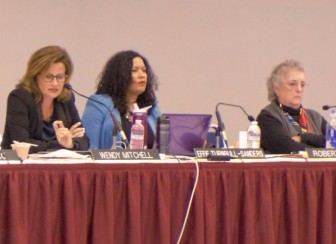 And Governor Brown’s final at-will appointment, Effie Turnbull-Sanders, joined Ms. Mitchell, Mr. Howell, and Ms. McClure in voting anti-conservation in favor of the Bay Cities Subdivision by the Sea in Seal Beach, The Ranch Hotel-in-a-Creek in Laguna Beach, the Monterey Bay Resort-in-a-Sand-Dune, and The Edge Multi-McMansions on sensitive habitat in Malibu. The list can continue.

Is their next vote to approve Newport Banning Ranch’s mega-development on ESHA?

Californians love their coast, and have faith that the 1976 Coastal Act will protect their pelicans, sand dunes, and ability for all of us, two- and four-legged alike, to enjoy it forever.

Governor Brown, we ask you to do your part.

Replace these commissioners with ones that will enforce the laws that have served our coast so well. It’s time to clean house and get the Coastal Commission once again protecting and enhancing California’s coast and ocean for present and future generations. Four new appointments, and replace Janelle Beland at Natural Resources. Contrary to their performance with Charles Lester, we have provided actionable reasons for firing them.

The future of our state depends upon it.