Frankly, I am not surprised.  You see there is no real accountability in the system of obscure water districts large and small all over Orange County — because there is no real public awareness of or interest in what these special districts do — because their area of responsibility is so narrow and relatively obscure that getting on the radar of the public is — well, virtually impossible.

Oh sure, Directors appear on the ballot.

Yet no one really knows who these folks are or what they do.

Kind of like an election to the political party central committee, the factors that tend to influence who wins election to a water board are ballot placement (first on the ballot?), ballot title, and then how many “slate cards” you buy on to — these being commercial endeavors that for the most part are available to the first or highest bidder.

My criticism is of most all water districts, all of whom toil away in obscurity, with a system that has little public accountability.  Well, guess what happens when  mom and dad aren’t watching?

You guessed it — everyone puts their hands into the cookie jar.

While most (not all) water districts offer full-time benefits for part time work — the Orange County Water District (which I use as an example because they are featured in the recent Voice of OC story) has a really outrageous get-rich scheme going on for it’s nine board members. 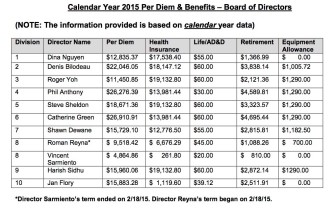 First of all — being an “elected” Board Member of a water district is a part time endeavor.  There are a few meetings to attend each month, but a part time position means that it is presumed you do something else for a living, or are retired or I guess have very few expenses (maybe you live with your parents, or your children?).

For this part time work — board members are taking home in most cases over $15k a year and in some cases over $25k in direct pay.

Except that this district then heaps the benefits package of their full time employees onto these lucky nine lottery winners.

It’s Cadillac health care benefits for themselves AND their dependents (of course board members can “opt out” for big cash payments instead, courtesy of rate-payers.)

Yes, you read that right — payments are made into a board member’s very-own 401(k) style retirement account — for some it’s a couple thousand a year, for others it’s three or four thousand bucks more – tax free.

What a great gig.

But we’re not done yet.

These part-timers also get life and accidental death or dismemberment insurance, with the ability to buy more.

And as if all of this isn’t enough, they all can get an “electronic equipment allowance” of up to $1,290 per year.

Translation — the lucky 9 lotto winners can go out and get a top of the line iPad or computer, the kind they would have anyways, but then have rate-payers pay for it.  What a deal.

To say nothing of the fact that some of these folks serve on other boards, or are even full time government employees, double or triple dipping into the benefits trough at the expense of taxpayers and rate-payers.

Of course these ten water board members with one vote could actually end all of this lavish self-dealing, and perhaps just take the reasonable monthly stipend.  But they have no reason to do so because no one is guarding the hen house from these foxes.

Just who are these ten OCWD board members?

My favorite “triple dipper” is Bilodeau, who has a full time position as Chief of Staff to Supervisor Shawn Nelson for which he handsomely compensated $160,000 a year.

On top of that he also serves as a part-time staffer to Nelson, paid $39,000 annually from the AQMD (so he’s full time, then part time).

Then he has his service on the water district, as discussed in this piece, with benefits gives him nearly $45,000 (if you have a calculator he’s at nearly $250,000 in taxpayer compensation annually – but I’m sure taxpayers are getting they moneys worth).  He use to be a quadruple dipper as he also concurrently served on the Orange City Council, but termed out last year.

And so then when an article comes out calling into question the practices of OCWD board members, I just assume that they are doing bad things.

Because if they can’t see the immorality of enriching themselves with full-time benefits for part-time work, then their judgement is flawed.

Of course it’s never too late for these folks to step off of the gravy train.  But I won’t hold my breath.

Jon Fleischman is publisher of the Flash Report.