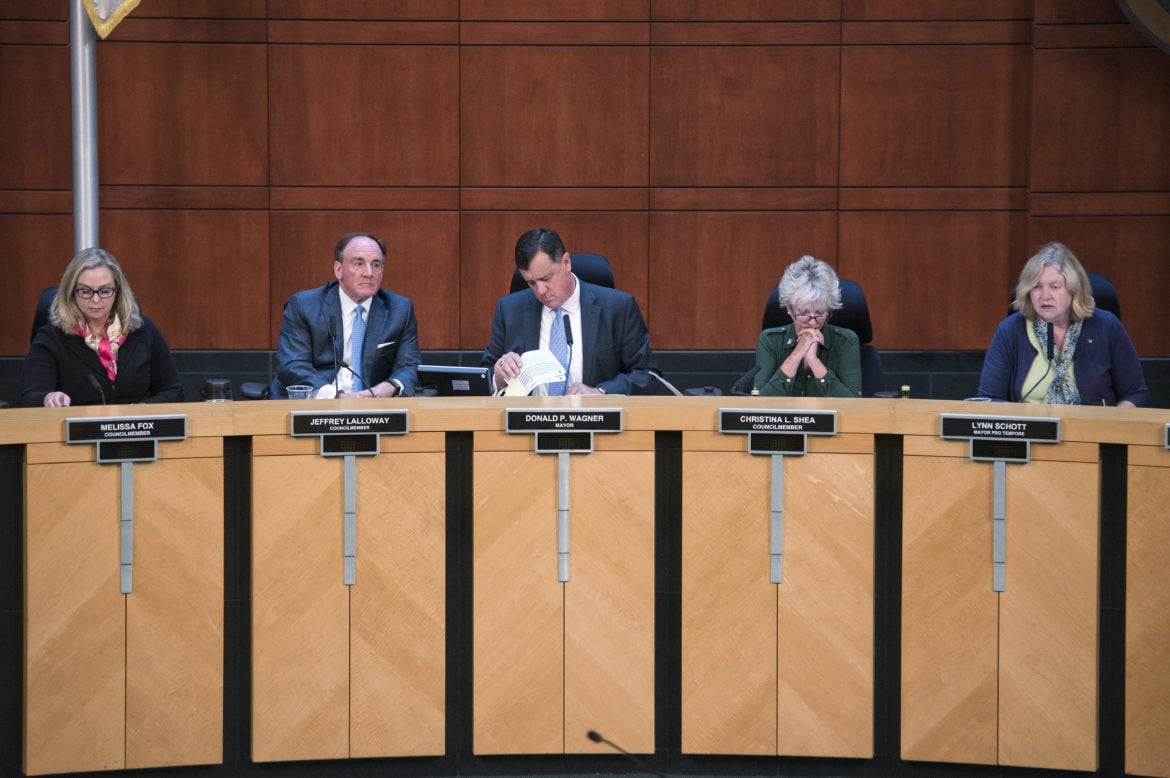 The national move to online shopping is reflected in the 2017-2018 Irvine city budget where sales tax money coming into city coffers is flattening, foreshadowing possible future budget problems, according to city officials.

City Manager Sean Joyce, during his budget presentation last Tuesday, told the City Council the move to online shopping is taking a toll around the country and showed them an article from the LA Times that reports 25 percent of malls are predicted to close in five years.

“We’re not immune to this,” Joyce said. “Most all of us are guilty of shopping online.”

While Irvine got $65.6 million in sales tax revenue for 2015-2016, that number is expected to dip to $64.3 million this upcoming budget cycle. Prior to 2015, the revenue stream had been steadily growing, presentation documents show. The sales tax issue came up during discussions of the new budget which was unanimously adopted by the City Council.

“Amazon is one of the major reasons … but there’s not a whole lot of solutions to that problem, there’s just not. We’re going to have to deal with that in the future,” Councilman Jeff Lalloway said of the declining sales tax revenue.

“That’s a chilling thought, especially that we’re so dependent on sales tax revenue here in the city,” Lalloway said.

“The temptation that we have to be on guard for will be to look for more and more revenue streams that involve higher taxes and fees,” Schott said.

She said that the council will need to find a balance of revenue and levels/types of services the city provides.

“There’s going to have be a trade off if we see this type of atmosphere continue,” Schott said.

The city is expecting to take in $184 million from traditional revenue streams this upcoming budget cycle, but is also transferring in more than $7 million from various special funds to meet the planned $191.7 million in spending for 2017-2018.

A sizeable chunk of that, $4.2 million, is coming from the city’s rehabilitation fund.

“We took $4 million and plugged that hole,” Fox said. “We’re making up our difference with one time funds.”

“We do know that we have a very volatile revenue base … this year is a good year. What happens in a bad year?” Fox asked.

While the council didn’t cut any expenditures from the budget Tuesday night, Lalloway suggested the city may want to focus on cutting expenses down the road.

“As far as the issue of balanced budget, the only choice we have is to cut expenditures tonight. At some point, that issue going forward is going to have to come up,” Lalloway said.

“We’re kind of in a difficult place right now … with moderate growing to flat revenues and increased expenditure,” Lalloway said, warning the city may be growing faster than it can financially handle. “Or grow less quickly than we’re doing.”

The budget provided room for hiring two police officers, three crossing guards, the creation of a transportation department to help ease Irvine’s growing traffic problems, an additional $2 million in pension pay out and raising the reserve up to 23.3 percent.

Councilwoman Christina Shea said that while a majority of Irvine’s budget goes to paying employees, the percentage is still less than other cities.

“Sixty six percent of our budget is for employee outlay, but that’s not huge compared to some other jurisdictions that are up to 80, 86 percent,” Shea said.

Last year, the council gave Joyce direction to build reserves up to 25 percent of the budget.

Although the city is slated to be at a 23.3 percent reserve level of $42.8 million this budget cycle, Schott suggested they might want to rethink the reserve amount down the road.

“Perhaps revisit that 25 percent threshold and move to something closer to 20, 22, 23 percent,” Schott said.

There’s also an additional $2 million in pension payout from the general fund, for a total of $7 million. The other $5 million comes from the city’s Asset Management Plan fund which is used to pay down pensions.

Under the current rate of pension payout, Irvine should be 98 percent funded on its pension liabilities by 2026, according to budget documents.

For future budgets, Shea said that she would like to have study sessions so the council can meet with staff and plan better.

“When we’re looking at a flat budget … we have to go back and spend more time in a study session and talk again about our priorities,” Shea said.

“I really think a study session … offers us the opportunity to meet one on one with staff and talk about our priorities.”

Spencer Custodio is a Voice of OC intern. He can be reached at [email protected].