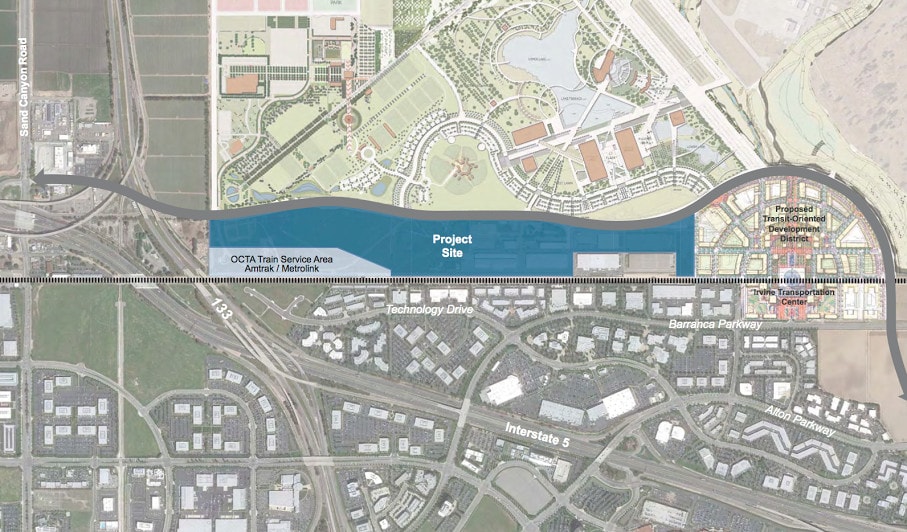 A map showing where the county proposes building its commercial development, between the Great Park and railroad tracks in Irvine.

Orange County supervisors have officially rejected proposals to create an emergency homeless shelter on 108 acres of largely-empty land the county owns in the city of Irvine next to the Great Park, instead voting to build a large commercial project including a hotel, office space, and market-rate housing.

The discussion Tuesday over how to use the county land included over two hours of testimony from more than 60 speakers about the Irvine land and homelessness, all of whom urged supervisors to either delay a decision until it resolves access concerns for the Second Harvest Food Bank of Orange County – whose distribution center is in the middle of the proposed project – or build a homeless shelter or affordable housing. No members of the public spoke in favor of the county’s proposed project, though supervisors said it would generate much-needed revenues to fund public services.

The first official reaction came within hours, when the Irvine City Council voted to sue to stop the county from moving forward with its plans to rent the land for a hotel, apartments and other businesses.

The county’s proposed project by the Great Park would create up to one million square feet of office space, 2,000 homes, 200,000 square feet of retail space, and a 242-room hotel. County officials estimate it will create 4,500 new jobs.

County officials did not make any commitments at the meeting to use revenue from the project for a specific purpose. A spokeswoman said officials haven’t decided how the estimated $3.7 billion in revenue over 75 years would be spent.

During the County Board of Supervisors meeting, Nicole Suydam, the food bank’s CEO, said “the county’s plan would pinch us on three sides of our property,” making it difficult to maneuver food distribution vehicles. The food bank has hired its own attorney to challenge the environmental analysis. She was joined by over 30 food bank supporters wearing orange shirts.

Suydam noted the food bank, which feeds over 250,000 people each month, was co-founded by the late Tom Fuentes, who was a longtime chairman of the Orange County Republican Party. All five county supervisors are Republicans.

Dozens of homeless advocates also showed up at the supervisors’ meeting, calling on the county to use the 108 acres for homeless services and to make permanent supportive housing a priority for county discretionary spending.

“Public safety is more than just hiring additional sheriffs,” said Leslie Mahaffey. “Public safety would be helped by providing the homeless with the housing they need. It would be less expensive than what we’re doing now.”

A study by UC Irvine researchers this year found the public saves money when chronically homeless people are provided housing with wraparound health services, through fewer hospital visits and crimes.

“The county was given the 100 acres for institutional uses,” said Lisa Mills, a former CEO of the Orange County Transportation Authority and Santa Ana councilwoman. She urged supervisors to build a 675-bed homeless shelter on the land, which was studied in the county’s environmental analysis.

“You own the land, you control the site, and the location is great. It’s next to the Second Harvest Food Bank,” and there’s “no homes” nearby, she said.

Does Irvine Have The Right to Regulate?

One of the central disputes over the project is whether the county is illegally sidestepping Irvine’s authority to regulate commercial land developments in the city. County officials say the project doesn’t need any permits or zoning approvals from Irvine, which opposes the project.

But the city argues the county is violating a written contract that suggests the land would be used for governmental purposes – rather than a commercial development – and that the environmental analysis was faulty and underestimated the project’s true impacts to traffic congestion.

Irvine was joined in opposition at the supervisors meeting by the two largest developers in the city – the Irvine Company and Great Park developer Five Point Communities – as well as the Orange County Transportation Authority, Caltrans, and Second Harvest Food Bank.

The impending legal battle could answer the question: Are government agencies subject to a local city’s land use authority when the agency builds a large commercial project on its land inside the city?

A lawyer for the county, Thomas “Matt” Miller, said there have not been any court rulings on that question. But County Supervisor Todd Spitzer, who opposed the proposed project, predicted the county would lose in court, pointing to a 1975 appeals court ruling that a public university lost its immunity from city land use oversight when its land was rented for a commercial activity.

Spitzer, who was the sole opposing vote, said he believed the courts would rule against the county in the inevitable lawsuits that would be filed, with taxpayers having to pay the legal bills of both the county and those who sue.

Typically land developments have to be approved by the city they’re in — Irvine, in this case — but the county says it’s exempt under a doctrine called “sovereign immunity,” in which counties don’t need city permission to change the use of county land.

Spitzer cited a 1975 state appeals court ruling, Board of Trustees vs. City of Los Angeles, in which the court said a public university lost its immunity from city land-use laws when it rented out its land for a private commercial activity to raise revenue.

In that case, the court said, California State University, Northridge, was leasing its land “as a revenue-producing activity. The activities which are conducted thereon by private operators have no relation to the governmental function of the university.”

The court continued: “The doctrine of sovereign immunity cannot shield the university from local regulation in this case. Even less defensible is the university’s attempt here to extend its immunity to private entrepreneurs who are involved in the local commercial market where their competitors are subject to local regulation.”

Miller, the county lawyer, replied that Irvine had agreed to give up its zoning authority over the land in the 2003 contract with the county, called a “pre-annexation agreement.” The agreement specifies the county can use the land as it sees fit, Miller said.

But Spitzer said that argument would fall flat in court because commercial development wasn’t included in the list of county land uses envisioned in the agreement.

“No rational judge would think that private development through a private entity was contemplated” in the 2003 agreement, Spitzer said.

Supervisor Shawn Nelson disagreed, saying the agreement’s list of uses says the County is not limited to those uses. He said Spitzer had a “fantasy that the uses were limited to municipal uses.”

Nelson has publicly proposed using the county’s Irvine land for an emergency homeless shelter, but also has said he doesn’t have the support from two other supervisors that would be needed to make it happen.

The supervisors’ meeting grew tense at times, with Supervisor Andrew Do criticizing a public commenter, immediately after she spoke, for suggesting supervisors – several of whom were looking down during many of the public comments – were ignoring the commenters by looking at their phones, possibly to look at Facebook.

“Don’t denigrate the work that we do up here with smart comments” about supervisors looking at Facebook, Do publicly told the commenter. “That is irresponsible” to say, Do added, saying he was looking at his phone during public comments to read a budget for the federal housing agency.

At other points, some audience members also shouted at the supervisors, prompting a sheriff’s deputy to approach them and speak to them, though no one was removed from the meeting chambers.

The back-to-back criticisms of supervisors drew pushback from Chairwoman Michelle Steel, who told a public commenter he wasn’t allowed to verbally “attack” the supervisors, who are the elected representatives of the 3.1 million residents of Orange County.

Additionally, the affordable units don’t have to be built as part of the county project if the developer pays an “in-lieu” amount that would be used to build the affordable housing elsewhere. In other jurisdictions, like Santa Ana, “in-lieu” fees have resulted in less than half of the housing units than would have been built if included as a percentage of the original project.

Supervisor Lisa Bartlett and county CEO Frank Kim said the overall project will bring an important revenue stream to the county that will enhance its ability to provide public services.

“This is just the maximum development,” Bartlett said of what was studied in the environmental report. “It could still be scaled down and changed” in the future.