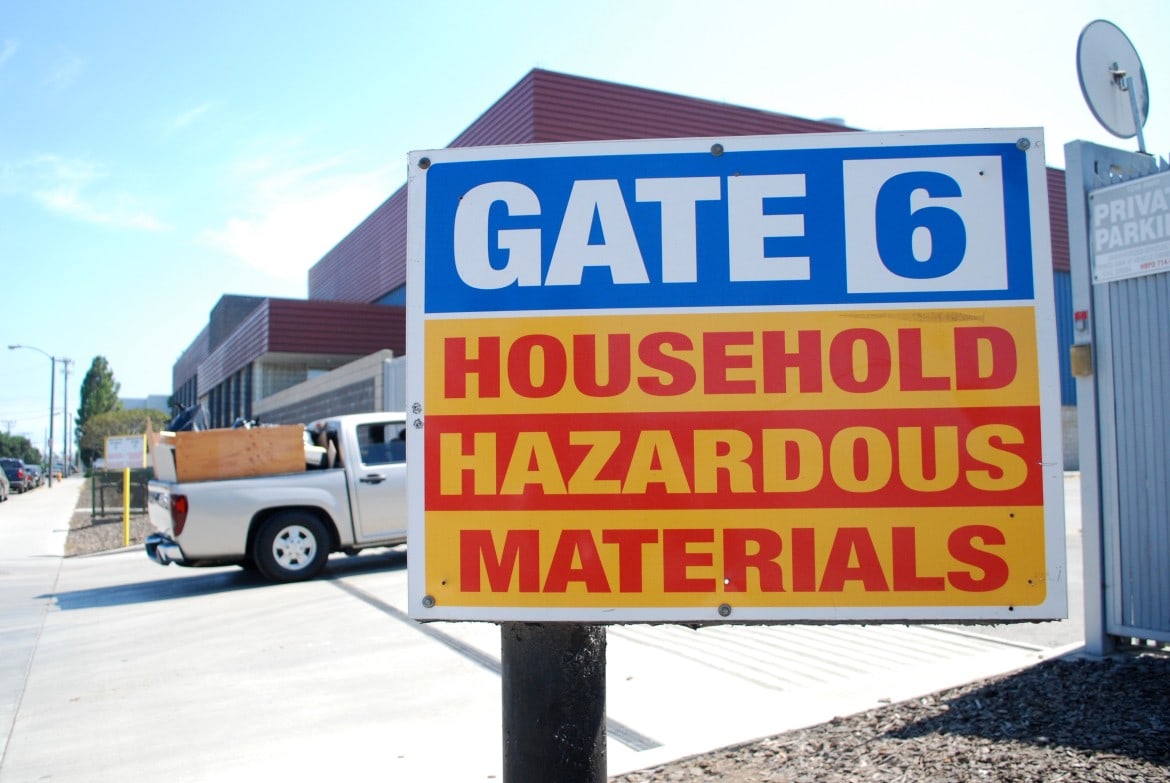 A trash dump lies directly across the street from Oak View Elementary School in Huntington Beach.

The shocking truth of life for the Oak View community and its children that reside in the most densely populated land in all of Orange County is daily environmental assault.

The residents of Oak View have suffered three important areas of environmental attack. First, the children and their families have lived in an atmospheric cesspool of stench, dust, and noise. Second, the Oak View community neighborhood is devoid of any green tree canopy, a result of Huntington Beach City vegetation removal. Third, the housing infrastructure is grossly out of compliance with minimum City codes. Oak View residents are the victims of systematic and institutional failures by City and County leaders. For decades the children of the Oak View Schools endured the stench of total governmental failure at the city, county, and state level. These young residents must learn, play, and live next to an open-air trash dump that spews filth, stench, vermin and vectors.

As an elected public school trustee in Huntington Beach, I was a member of the school board that sued Republic Trash Services in 2013, for their poorly run operations at the Rainbow Transfer Station and Public Dump in Huntington Beach, and the County of Orange for illegal public nuisance. Another suit was filed against the City of Huntington Beach for their part in allowing rezoning of a parcel adjacent to the Oak View Preschool, to allow moving trash operations next door to our most sensitive students aged three and four. During the three-year litigation, the public learned that the Southern California Air Quality Management District (SQAQMD) had visited the Republic Transfer Station and Trash Dump thirty-six times over a period of years with multiple “Notice of Violation” citations issued each time for noxious public nuisance violations. During this same period, the County of Orange visited the transfer station and trash dump weekly and found nothing to cite. Similarly, the City of Huntington Beach Code Enforcement Officer, who admitted he did not even know he was assigned to the open-air dump, bragged in a public forum of his having never even stepped foot on the dump site.

I was personally puzzled how three agencies could smell the same stench and see the same filth with two of them, City of Huntington Beach and the County of Orange, coming to the conclusion that nothing was wrong.

I concluded there must be something wrong with the Orange County Health Care Agency and the City of Huntington Beach Code Enforcement trash dump inspector qualifications and training. California Public Records Act (CPRA) demands were submitted to the County of Orange and the City of Huntington Beach for OC dump inspector job applications bona fides. The CPRA request specifically asked for (a) proof of job application being submitted, (b) applicant education, (c) applicant certifications, and (d) applicant work history. I asked that all personal information be redacted (address, phone, email, medical history, personal references, etc.). Both the County and City claim to have open and transparent civil service hiring; the public has the right to know if employees meet the minimum education, job experience and technical credentialing for the job. Only the employee name, education, certifications, and work history were requested.

Orange County Counsel Leon Page was forced to realize the error of his faulty defense claims and was made to produce the information that I had requested, along with paying my attorney’s fees. The County never appealed, knowing it would have been a fruitless endeavor, one that could not be overcome, and one, which would have been financially wasteful and morally wrong.

Huntington Beach City Attorney Mike E. Gates has not followed in the wise footsteps of Leon Page. To my surprise, even after prevailing against the City, who lost its case before the CA Superior Court’s Honorable Judge Horn, in November 2017, the City Council of Huntington Beach, has decided to appeal due to the faulty counsel by its elected City Attorney, Mike E. Gates. The costs in this case mount, and the children could continue to suffer, under poor administration by the City of their Code Enforcement Officers, who to date have only inspected the 18-acre dump site one time in the last 7 years.

The City of Huntington Beach may claim to operate an open, transparent, and fair civil service hiring process to select the most qualified candidate for all jobs. They should make sure that dump inspector candidates meet at least the minimum job qualifications published for the opening. We will never know, as City Attorney Mike E. Gates has repeatedly refused to give any information to the public in this regard, even after knowing that the County of Orange was made to produce the same information, and even after the City’s loss this November. It is the right and responsibility of the public to check and make sure the OC conducts fair hiring of at least minimally qualified candidates, ones who care about the health and welfare of the residents of HB, especially our most vulnerable, the children. The only way to undertake this is for the public to see employee job application information.

The Oak View Community without this private and personally funded lawsuit by me is left to drift. The City of HB has failed to inspect, cite, and enforce even for the most basic and rudimentary components of their Conditional Use Permit (CUP) and City public nuisance codes to protect our Oak View youth.  Students at Oak View Elementary School and Preschool are at risk due to negligence of the City of HB’s public inspection failure. This is about the health and welfare of residents.  City Attorney Mike E. Gates has beguiled the City Council into voting 7-0; in Huntington Beach it is better to hide then to protect children. Hide everything so our community cannot understand why the Code Enforcement Officer appointed to inspect, cite and enforce has failed to do so.  Honorable Judge Horn and I both believe that the City of HB and City Attorney Mike E. Gates have failed Oak View’s children. It is time for the City of Huntington Beach to care about all of its residents, no matter which neighborhood they reside in.

John Briscoe was elected in 2006 to the Ocean View School District Board of Trustees. He currently serves as Board Vice President.