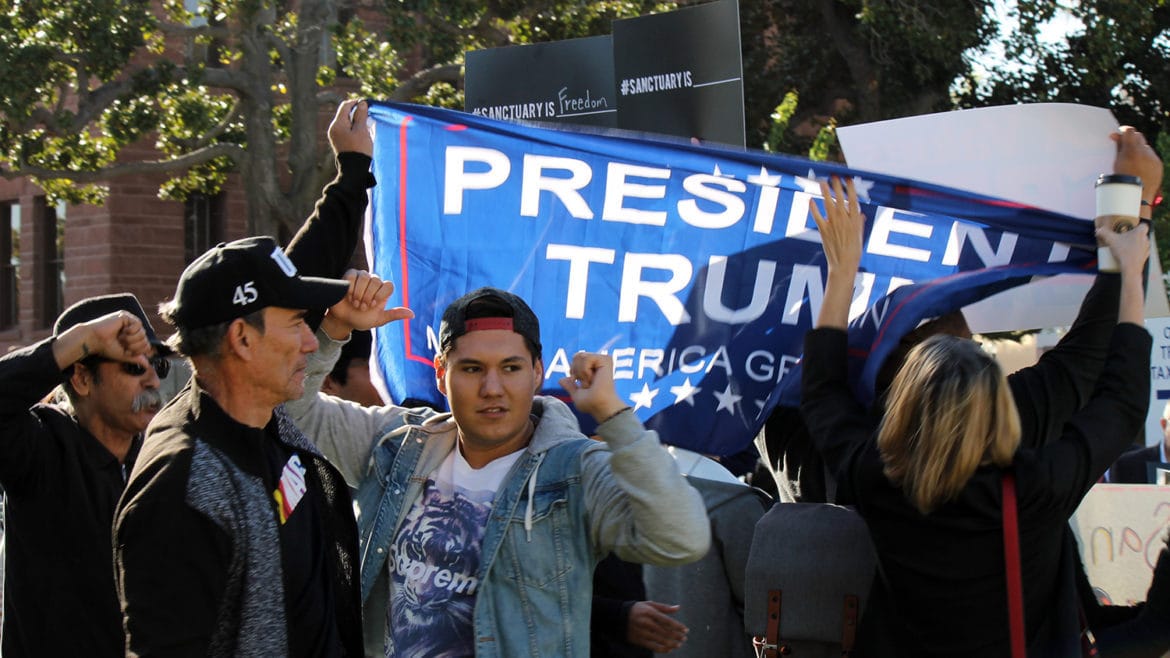 The Orange County Board of Supervisors votes to join U.S. Department of Justice lawsuit against the state for its sanctuary laws. Proponents of the move clash with opponents March 27, 2018.

The Orange County Board of Supervisors voted 4-0 in closed session Tuesday to join the U.S. Justice Department lawsuit against California’s sanctuary laws.

Supervisors also took a separate stand against one of those laws, created by state Senate Bill 54, which bans law enforcement from sharing immigration status information with federal authorities. The supervisors adopted a resolution on a 4-0 vote condemning the state law after hearing from people on both sides of the issue. Supervisor Andrew Do was out of town.

“To cooperate is not coercion. It’s not picking up their responsibilities, right? You can all help me by just cooperating. Tell me if it’s something I need to know, even if its my job. You may intellectually be incapable of understanding that, but it is factually true,” Supervisor Shawn Nelson told the crowd during Tuesday’s board meeting, drawing boos and groans from the audience.

Nelson reminded everyone resolutions are mostly about making a statement.

“Remember that resolutions are largely just that: They are symbolic.”

But Supervisor Todd Spitzer said the Sheriff’s Department started to post the names of all people in jail and their release dates on its website in a move to circumvent the state law.

“The Sheriff’s Department announced yesterday … the Sheriff’s Department is going to start putting every single in custody on the website,” he said. “That way any agency who may be looking for somebody in another custodial facility is going to be able to find the release date and it won’t take any transfer of information that’s prohibited, at least heretofore, under SB … 54.”

Spitzer, a former prosecutor who now is running for District Attorney, said it’s too dangerous to law enforcement to let people out of jail while another law agency is looking to arrest them.

“To let somebody out, to get access to weapons, access to their homeboys or homegirls, access to whatever,” Spitzer said, immediately drawing boos from some people. “Whatever, you can boo me all you want, you haven’t worked the streets like I have.”

Nelson said the move to join the lawsuit gives the county an opportunity to make its plea before the court.

“… From a legal standpoint, what we are choosing to do, with asking our county counsel to intervene the litigation, is not to go rogue, but to get in front of the court,” Nelson said. “So they see it our way.”

The county’s move comes after the Los Alamitos City Council March 19 passed an ordinance in an attempt to exempt the city from state sanctuary law from SB 54. It’s unknown how it will work and many legal experts say it will lead to a lawsuit against the city.

“We need to look at every tool available to ensure public safety in the general public and homeless population. Otherwise, we will never be able to get full public support behind homeless sheltering and housing solutions,” Supervisor Lisa Bartlett said.

“I can sit here and tell you countless stories … about immigrants … and stats and how immigrants are far less likely to commit crimes than citizens,” Anderson said.

She also said supervisors should think about what side of history they will fall on.

“In the 1960s, people sat in seats just like yours and vehemently opposed anything that advanced civil rights. And now we look back on them and we’re ashamed and we know they’re on the wrong side of history,” Anderson said. “I will be able to look in my children … and tell them we were on the right side of history. Will you be able to do the same?”

Earlier in the day, she and another sanctuary law opponent were the only two to mount a counter demonstration against a protest of the supervisors’ resolution.

“For them to stand here and lie about who Trump supporters are, is the racist people. Those are the people that choose to call me names because of my skin color. We love all people. America is a country of immigrants, but we are legal immigrants. We are people that come here according to the rule of law,” Peters said.

She also said people should self-deport.

“Now, the fact that you’ve been here, 20, 30 years, take it as gratitude and grace and do the right thing: self-deport,” Peters said. “You’ve been here illegally for so long, be thankful that you got the education you did.”

Peters and other sanctuary opponents left the board meeting and headed to Mission Viejo, where council members unanimously passed a resolution Tuesday night endorsing Los Alamitos’ stance against sanctuary laws.