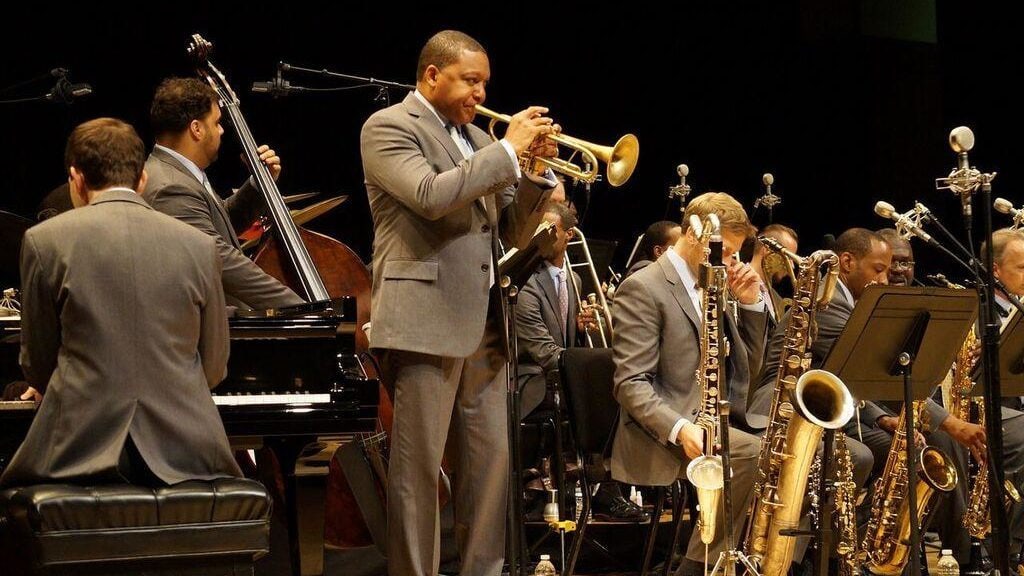 Jerry Mandel’s day job is running the Irvine Barclay Theatre, but at nights and on weekends he’s a jazz saxophonist with a steady stream of gigs. I caught him a while back at Newport’s Bayside Restaurant, where he plays regularly.

One of Mandel’s vows when he took the Barclay position was to establish a first-rate jazz season much like the one he helped put together when he was president of the Segerstrom Center for the Arts.

Nitpickers might argue whether he has accomplished that goal yet, but Mandel certainly knows how to start the season right: with Wynton Marsalis and his band, the Jazz at Lincoln Center Orchestra.

Those who saw the group at the Segerstrom Center in 2016 will probably remember not only their effortless mastery of Golden Age jazz, but also the charmingly down-home style that Marsalis establishes from the outset. He’s the perfect bandleader and host, scholarly yet low key, combining his obvious love of the music with an easygoing sense of humor, gently ribbing his sidemen between songs and commenting ever-so-subtly about the world outside of jazz.

The sold-out house at the Barclay was treated to an all-Ellington evening. If you’re a fan of the Duke, it was heaven. For those less familiar with his considerable output, it was an excellent opportunity to hear some lesser-known but beautifully crafted songs weaved in with a few standards, played by a band with intimate knowledge of Ellington’s performance style. This group was formed three decades ago with some of the veterans of Ellington’s group, and Marsalis talked about the importance of absorbing that special legacy firsthand.

The program for the evening was roughly chronological. Marsalis and his band started with a few early, familiar Ellington classics.

“The Mooche,” composed by Ellington and Irving Mills in 1928, is a raucous comic number. It’s a classic example of “jungle” style, as it was then called. Marsalis sneaked in a tasty solo; so did trombonist Chris Crenshaw, one of the evening’s standouts.

Naturally, a stroll through the early years included “It Don’t Mean a Thing (If It Ain’t Got That Swing”). It was given a thoughtful and subdued treatment, starting with a heady piano introduction by former boy wonder Dan Nimmer (now a Marsalis veteran in his 30s), who always throws delightful curveballs, changing things up without sacrificing taste or respect for the source. Ted Nash provided a rousing alto sax solo.

“Mood Indigo” was the last of the old, beloved Ellington songs. Then the band moved into less familiar and more virtuosic territory with “Braggin in Brass,” which this band has performed masterfully for years. As the name implies, it’s a tour de force for the trumpets and ‘bones, and if it sounds at times like a Manhattan traffic jam, they’re doing their job.

The rest of the first set featured songs with exotic titles: “Lady of the Lavender Mist,” “Moon Over Cuba, “Jack the Bear.” “Moon,” with an elegant and dreamy Latin feel, was made even more exotic by Elliot Mason’s moody solo on a rare instrument, the bass trumpet, which looks and sounds much like a valve trombone.

The second half of the evening gave us more rare masterpieces from later in Ellington’s long career, including several movements from “The Far East Suite,” recorded in 1966 but seldom performed by Ellington, even though it won him a Grammy.

It’s an atmospheric and evocative group of songs, and if you listen closely you can hear Ellington’s interpretation of the sounds he encountered – a Muslim call to prayer, for example – translated into his inimitable jazz language.

The evening ended with an impromptu jam after most of the band had left the stage. Marsalis walked over to his rhythm section and began wailing, delivering what had been doled out only in frustratingly small bits during the evening: his brilliant improvisational skills. In that respect, Marsalis is almost too good a bandleader. He gives his sidemen so much room to shine that we don’t get to hear enough of the jazz world’s greatest living trumpet player.

It’s a small complaint, considering the overall quality of the band. My only other quibble: we have to wait too long between visits. Please, Jerry, bring them back to kick off your next season.