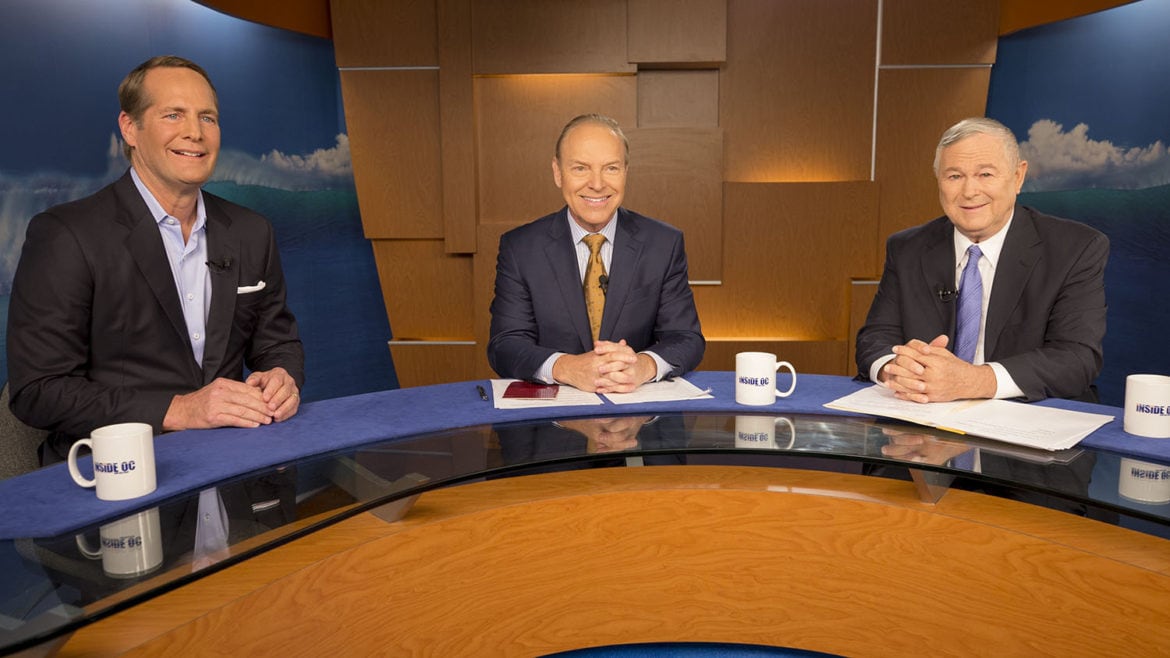 The roughly 25-minute verbal joust will air 5 p.m. Sunday on Inside OC with moderator Rick Reiff on PBS. The race is one of four Orange County Congressional contests Democrats hope to win Nov. 6 in their bid to take at least 23 seats nationally, which would give them control of the U.S. House of Representatives.

Reiff asked the two candidates what issues were most important, Rohrabacher brought up immigration. It’s the first time the immigration issue has been debated by the two or come up as a major issue in the 48th Congressional District race.

“… we have had 30 million illegals crossing into our country in over the last 20, 30 years … if we ignore that, number one, it’s draining the money from all these programs we’re talking about. When you talk about giving medicare to illegal immigrants, you’re going to collapse that system,” Rohrabacher said, accusing Rouda of wanting to give undocumented immigrants medicare.

“And I haven’t said that,” Rouda interjected.

“Well, can you not interrupt me so I can have my say? Rohrabacher replied. “When you have somebody who’s willing to give medicare to illegal immigrants, which we have a video of this gentleman making that promise, but it also drains money away from education, from health care, from veteran benefits,” the Congressman said.

Rohrabacher’s campaign sent Voice of OC an email with a YouTube link which shows Rouda, at a debate with former Democratic candidate Hans Keirstead before the June 6 primary election.

The moderator asked if Rouda would support healthcare for undocumented adult immigrants.

“Yes, and when I talk about medicare for all, or some of these other measures that provide some level of assistance to subgroups, the answer would be for all residents of the United States of America,” Rouda said in the video of the undated debate.

At the Oct. 15 debate, Reiff asked what the Congressman’s and candidate’s plans are on immigration, specifically about Dreamers.

“What we’ve got are people in this country who are here illegally and there are millions of them and they’re undermining our ability to provide services to our veterans, to our seniors … they are draining that money. We cannot afford to attract more people here by making even more promises if they come here,” Rohrabacher said.

According to the Census Bureau’s 2017 annual community survey estimates, roughly 722,000 people live in the 48th district. Of that, about 150,000 are Latino and 132,000 are Asian. A little over 170,000 people are foreign-born, but the bureau gives no estimate on undocumented immigrants.

Rohrabacher said if Dreamers were to be given legal status, the move would attract many more immigrants from across the globe and it would break down an already strained immigration system.

“When it comes to Dreamers, anybody who’s here illegally, if we legalize their status, there’s going to be millions more who come here. We care about these young people, but we care more about our own families … because if we legalize their status, people all over the world are going to say, ‘Send our kids there right away!’ They’re going to get all the benefits of American citizens,” said the Congressman who has held office for nearly 30 years.

He also said schools, neighborhoods and social programs would deteriorate because funding would be diverted to an influx of immigrants if Dreamers were given legal status. He said immigration is already straining many social programs.

“… millions and millions more will come and our system will breakdown. It’s in the process of breaking down now. Our neighborhoods aren’t safe, our schools are inundated and we are  punishing our own people by providing limited resources to people who are here illegally,” Rohrabacher said.

Rouda said Rohrabacher wants to deport all undocumented people and said the Congressman helped block past legislation which could have given many undocumented immigrants a chance of legal status.

“Let me be very clear. Rep. Rohrabacher wants to deport everyone who is here undocumented. And he wants to charge them … a million dollars each to come back to build the wall,” Rouda said.

Rouda pointed to a 2013 Senate Bill which would have provided Dreamers a way to legal status, border security funding and modifications to the visa system. But the bill died because it didn’t make it to a vote in the House of Representatives. Rouda said Rohrabacher and then-Speaker of the House John Boehner (R-Ohio) prioritized their political ambitions.

“That legislation could have passed in the House of Representatives … but Rep. Rohrabacher and Speaker Boehner never let it to the floor to be passed … and that’s what’s wrong with Washington where the corruption and the self-serving interest of trying to keep your job versus putting your country forward in the right way —  through bipartisan, strong legislation — is why we need new leadership,” Rouda said.

It’s home to nearly 402,000 registered voters as of Oct. 15, according to data from the Orange County Registrar of Voters. Republicans hold a nine-point lead over Democrats at 38.7 percent of voters, while no party preference voters consist of 27 percent of voters.

“So he (Rohrabacher) refutes the evidence on climate change, the role of carbon emissions in the atmosphere and heat-trapping gasses … and our poll (2018 Orange County Annual Survey) shows that typically the Republican Party denies climate change … but it’s a little different in Orange County,” Moodian said. “We call them the eco-Republicans — people who get disturbed when we have to talk about building higher seawalls.”

Moodian said while coastal Republicans may like lower taxes and less regulations, they also want to maintain clean beaches and the quality of life they currently enjoy.

“I believe global climate change is a real issue that has to be addressed. He doesn’t,” Rouda said.

Rohrabacher instead offered some praise to Trump, but also said he’s willing to vote against his policies if they don’t fit OC.

“I’m willing to work with Trump when he’s right … and oppose him when he’s wrong,” Rohrabacher said. “We had a GOP tax bill I ended up opposing … that was because it wasn’t good for Orange County.”

The Chapman OC survey found the majority of respondents disapprove of Trump at 63 percent.

“Sometimes it’s a standing joke among some folks that your Putin’s buddy, Putin’s lap dog … explain your relationship with Vladimir Putin,” Reiff said.

Rohrabacher called the criticism of his relationship with Russia and Putin “fake news.”

“The bottom line is I think that, yes, we should cooperate with Russia now that it’s no longer our major threat, meaning the primary threat — they don’t meet our standards, but right now we have to deal with radical Islam and China. And Russia — we should cooperate where we can with Russia rather than being unrelentingly hostile,” Rohrabacher said.

“That’s his basis for saying the U.S. intelligence agencies are wrong (about election interference). I side with the U.S. intelligence agencies,” Rouda said. “We should be very concerned about Russia. It is a dictator who has taken over Crimea, who has invaded Ukraine, has killed journalists on foreign soil in England. And to sit there and turn a blind eye to that is ridiculous.”

‘More than anything, forget if … there’s a D or an R next to either of our names — see if the values represent your values and vote for the person who has the character that you deserve in Congress,” Rouda said.

Rohrabacher took the chance to attack Rouda once more during the closing remarks.

“I personally identify with the hardworking people here in Orange County. And you know who I am, and sadly my opponent, you don’t know who he is. He condemns oil companies, for example … yet he himself has been heavily invested in production of crude oil. Personally benefited,” Rohrabacher said.

Reiff was going to give Rouda roughly 10 seconds to respond to numerous claims the Congressman made during his closing statement, but Rouda declined.

“Well, it’s so full of falsehoods, where do you start? And that’s just a typical politician in Washington D.C who’s been there for 30 years,” Rouda said, shortly before Rohrabacher extended an arm and the two shook hands.