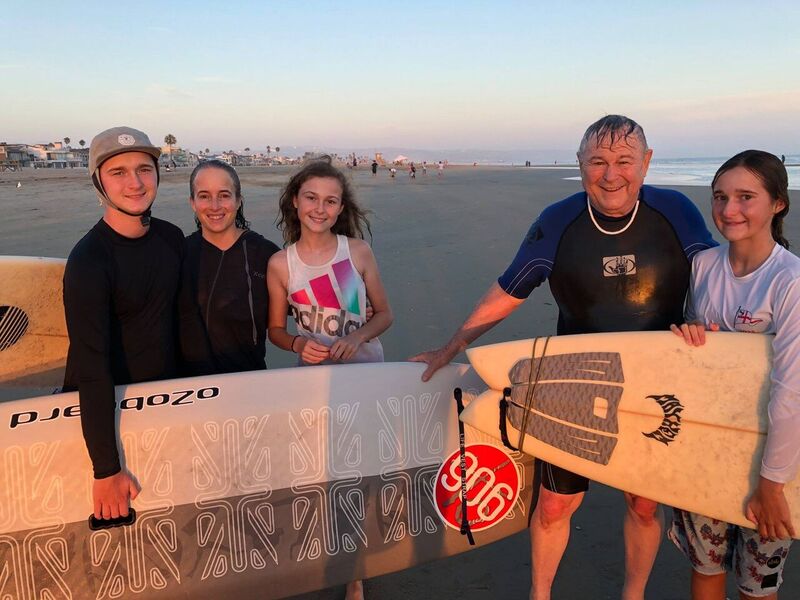 As an Orange County surfer, “making waves in DC and riding waves in OC” has been my call to action. “Go for it” rings in my ears as does “get it done.” Sometimes I’ve ended up challenging my president and party, and other times it has meant crossing the aisle to work toward bipartisan solutions. Most often it has meant standing tall for the fundamentals of individual freedom, limited government and a foreign policy based on America first.

Here in the 48thdistrict, my friends, neighbors and, yes, constituents, are part of a beach culture that, like the cowboy culture of the American heartland, represents courage, an independent spirit, and is not inclined to unquestionably accept orders from authority. These are patriots, sportsmen, and optimistic individuals with free spirits and solid beliefs. All the things that enrages the liberal/left establishment.

I have been blessed with the opportunity to not just live and raise a family in Southern California, but to share its culture and to represent it in Congress. Surf culture is a defining part of our Southern California soul, as is the aerospace culture. All this is our way of life and I love it. Keeping the dream alive could explain why I never moved my family to DC, opting instead to sleep on a sofa in my Washington office to take those long flights from Washington to California every week. It also explains the focus of my agenda.

In the early 1990s, an oil tanker ran over its anchor right off of Huntington Beach.  I immediately flew home and worked with local authorities to minimize the damage of the resulting oil spill. Later, to prevent a repeat, I played a significant role enacting legislation requiring the double hulling of all tanker ships in our coastal waters. Furthermore, I have worked with the Corps of Engineers on sand replenishment programs, and promoted technology development that benefits our communities.  A top priority is eliminating the the danger of nuclear waste stored in the now closed San Onofre Nuclear Generating Station.

Watching out for my constituents means dealing with threats to our quality of life. That’s why I authored legislation that once enacted will give local people the power to prevent sober living homes from inundating our residential neighborhoods. In late September there was a hearing of the Judiciary Committee on the issue and bipartisan commitment to dealing with it.

To protect our quality of life, I am also doing my best to reduce the severity of airplane noise. I introduced the NO NOISE Act, which would require the FAA to prioritize noise impact on fly-over communities more highly than the efficiency of airlines. I also called on JetBlue to retrofit its aircraft to make them quieter, and within weeks, the company announced it plans to do so.

Protecting our Families– For several years I have been advocating a creative, bipartisan approach to address the challenge of covering those Americans with pre-existing conditions, and I expect that my plan will be a major part of overall healthcare reform in the upcoming Congress.

Protecting Our Seniors– I have always voted to protect Social Security and Medicare. Too many politicians today are willing to imperil health care programs designated for seniors by expanding them to everyone, including illegal aliens. We cannot afford to put their solvency at risk for partisan reasons.

Protecting Our Heritage – Corporate PACs are bankrolling candidates who support tax credits and other crony subsidies to build high density development. Our Orange County beach communities don’t need to become a version of Santa Monica. I oppose this cronyism and special interests that want to bulldoze every inch of land to impose high density housing on us.

Protecting Our Pocketbooks – I was one of a handful of Republicans who voted against the GOP tax bill. While there were many good parts of that legislation, it increased the tax load on a significant number of Orange County homeowners. I didn’t go to Washington to raise the taxes of my constituents, so I voted no!

Protecting Our Borders – Clearly, we must protect our border, support the hardworking men and women of ICE, and ensure American citizens are put first. Doing so is to respect legal immigrants and the American citizens who pay for the programs like Medicare and Social Security, the resources for which are drained and denied to our own people when our borders are not secure.

Protecting Our Veterans – Since my first election to Congress, keeping our commitment to those who have defended our nation has been a top priority.  I championed legislation to reform the Veterans Affairs Department and have worked with thousands of local veterans to ensure they get the benefits, recognition, and healthcare they earned and deserve.

Protecting Our Civil Liberties– In 2014, I authored the Rohrabacher-Farr Amendment, which protects medical marijuana users who are complying with their state laws. I am a strong believer in the 10th Amendment to our Constitution, which leaves issues like this to local people. The next step is to let states manage cannabis law completely, and my legislation, H.R. 975, the Respect State Marijuana Laws Act, has 46 bipartisan co-sponsors.

I ask for your vote so that I can continue to fight for the liberty, security and prosperity of the American people, especially my constituents. It has been my honor to represent them in the United States House of Representatives.

Dana Rohrabacher, a Republican, represents the 48th District of California and is running for re-election to serve during the 116th Congress that begins in January.