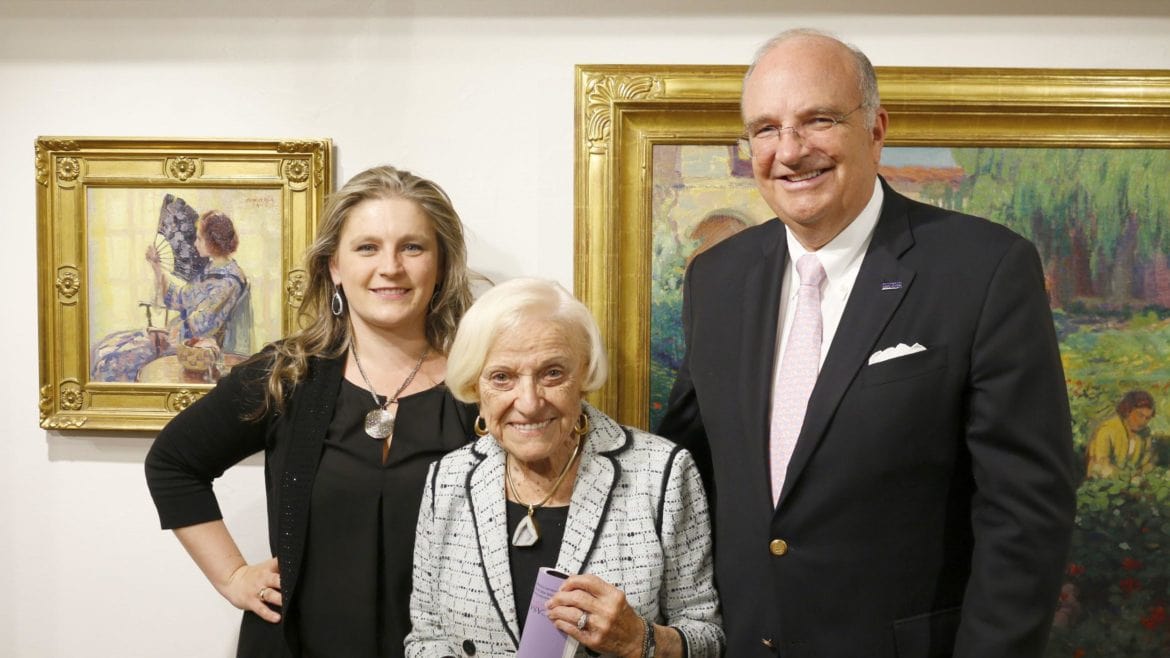 Admission: $5 general, free for members and children under age 13

On a quiet hill overlooking the Pacific Ocean, Casa Romantica stands like a Spanish-style beacon to art, culture and pleasant gardens.

Casa Romantica is situated in an amazing location, on the coast in San Clemente, with a view of the beach, the vast blue yonder and the city’s pier. Still, it’s a little out of the way for a majority of Orange County folks.

The cultural center is housed in a 1927 Spanish Colonial revival house that used to be the home of the founder of San Clemente. Now, it’s a registered historic landmark.

The selections in “The Idle Hour” were made by Berenika Palys, who curated the show and also serves as executive director of Casa Romantica. She has been in charge of the cultural center’s artistic programming since 2013. (Until June of this year, Berenika went by her previous surname, Schmitz.)

This exhibition consists of 23 paintings from the Irvine Museum Collection, which is a wonderful, broad and valuable collection of California Impressionism and other works that was started by Joan Irvine Smith and her mother, Athalie R. Clarke. The bulk of the collection has been showcased since 1993 at the Irvine Museum, located on the ground floor of Airport Tower in an office-heavy region of Irvine.

Palys chose works that best represent the beauty of Casa Romantica and its surroundings. The exhibition space used to be an old bedroom area, according to Amy Behrens, the museum’s marketing and PR director. From the windows, one can see views of the Pacific Ocean as well as some flower-filled gardens. 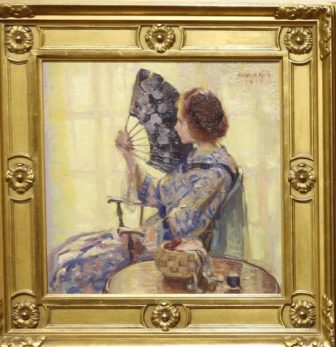 “The Idle Hour” gets its name from a painting by John Hubbard Rich of a woman taking a break with an Asian-style fan. It’s a circa 1917 oil on canvas.

The rest of the works show young girls at play or relaxation, bucolic scenes of the great, undeveloped California landscape, women having tea, a woman collecting flowers, and calm, relaxed ocean scenes.

The whole concept behind “The Idle Hour” might strike some as a little bourgeois.
Who has time to be idle anymore? Perhaps the bourgeoisie does, if you still believe in that term. Anyway, the focus of protest nowadays seems to be more on the one-percenters than the class that can afford to have some leisure time.

These are beautiful paintings, and there are many rarely seen works by well-known artists in the exhibit.

“The Idle Hour” features the obligatory bright and sunny poppy flower painting by Granville Redmond (“Flowers Under the Oaks,” no date, an oil on canvas). It’s actually quite attractive and well executed.

But walk along the wall a bit and in the corner is a captivating oil on canvas of a sunset by Redmond. It’s an undated piece known as “Coastal Scene at Sunset,” and it depicts the sun setting over clouds along a coast that looks like Laguna Beach. It’s similar in look and style to paintings by Frank Cuprien, a talented plein air painter who was one of the founding members of the Laguna Beach Art Association.

In fact, quite a few of the first LBAA members are represented in “The Idle Hour,” chief among them Edgar Payne, Anna Hills and Redmond.

Hungarian-American artist Kleitsch is represented by his painting of the Mission San Juan Capistrano, circa 1924. He’s also got a second painting of two women, one standing and one sitting, in front of a building that appears to be the mission. Arthur G. Rider, another accomplished painter (and LBAA member), offers his version of the “Mission Garden,” circa 1929, and it’s a beautiful, colorful work.

The exhibit includes two paintings of roses by Bischoff, another European immigrant who made a name for himself in the U.S. 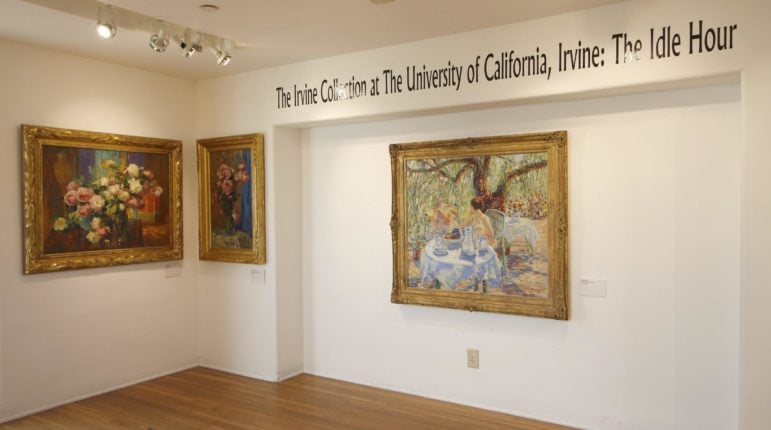 Meta Cressey’s “Under the Pepper Tree” (no date) is a standout. She takes more of the classic Impressionist approach that became famous in France in the later 1800s. Because she lets color and brushstroke fill in for detail, she allows the viewer to use his or her imagination a bit more than her colleagues in the show.

Overall, this is a laudable accomplishment by curator and Casa Romantic director Palys. One can feel a connection between the images in the gallery and the space itself, as well as the outside surroundings.

A note: Casa Romantica is closer to the ocean than your typical visual art museum, so there’s inherently more moisture in the air there. I’m sure the organizers have taken into account the environmental requirements for keeping these paintings in that location at optimum condition. (No open doors or windows at night or early in the morning, etc.)

“The Idle Hour” is worth a trip to coastal San Clemente. While you’re there, be sure to stroll the grounds of Casa Romantica and check out its upcoming cultural programming.