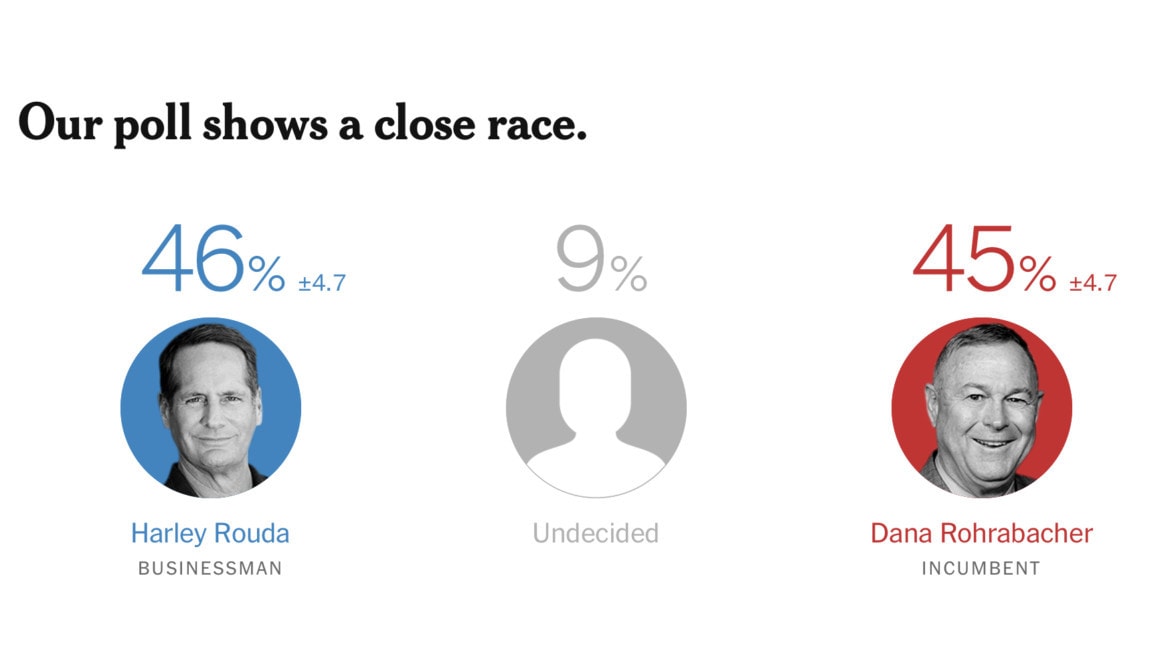 Longtime Rep. Dana Rohrabacher (R-Costa Mesa) and Democratic candidate Harley Rouda are tied in the 48th Congressional district race, according to a poll from the New York Times.

Although the poll, which ended Sunday night, shows Rouda with a one-point lead at 46 percent of the 491 respondents, the lead is still well within the 4.7 margin of error and 9 percent of voters who responded are undecided.

“There has been quite a bit of national and statewide attention on the Rouda/Rohrabacher race and I think it has drummed up a lot of enthusiasm of Democrats,” said Chapman University political science professor Mike Moodian.

“Rohrabacher also has some things working for him … he received the Orange County Register endorsement … those who read the Register vote. I think that carries a lot of weight — that’ll move the needle a little bit,” Moodian said.

National Democrats have targeted the 48th district because Hillary Clinton took the district by two points in 2016 — voters have historically voted for Republicans at the top of the ticket by a wide margin. In 2012, Mitt Romney took the district by 12 points. Democrats need to take at least 23 seats in the 435-member U.S. House of Representatives to gain the majority.

Like the other Orange County Congressional districts targeted by national Democrats, the GOP’s edge in voter registration has been slowly dropping. In 2012 the GOP had a 15-point lead over Democrats — seven points more than 2018. The no party preference voters grew from 23 to 27 percent since 2012, while Democrat voters grew from 28 to 30 percent.

A separate poll from the Glendale-based political consulting firm and pollster Thomas Partners Strategies shows Rohrabacher at a nine-point lead over Rouda as of Oct. 31.

“The tsunami of negative ads attacking Rohrabcher (sic) have done damage to his favorables putting him underwater at 50.4% unfav to 41.7% fav. Despite poor favorability for a 29-year incumbent, Rohrabacher has been given life support from (President) Donald Trump,” Thomas wrote in the poll. “While California overall breaks in favor of Democrats and against Trump, CA-48 is proving to be the firewall holding back the blue wave.”

According to the Federal Election Commission website, Rouda has outraised Rohrabacher by threefold at nearly $7.4 million, as of Oct. 17.

While former President Barack Obama and former Vice President Joe Biden have stumped for Rouda and the other Democratic Congressional candidates in Orange County, the GOP hasn’t had the same big-names come out to stump for them.

In a rare visit from the Republican National Committee, chairwoman Ronna Romney McDaniel, along with Rohrabacher, rallied supporters and volunteers at the GOP field office in Laguna Niguel Oct. 17.

“Orange County is critical to Republicans maintaining the majority in the House,” McDaniel told reporters outside the GOP field office. “So that’s why I’m here to campaign for Dana Rohrabacher.”

Moodian said the lack of big names stumping for Republicans “says a lot right there. The Republicans, they’re walking a very fine line right now. It’s a tight rope, because they need to appeal to a lot of the no party preference voters, so in that matter they want to distance themselves from the President to a degree … they want to stress the gas tax, fiscal conservatism.

“It’s not as if Mitt Romney or others have been coming out and doing campaigns … none of these guys have come out here,” Moodian said.

He said the lack of big rallies by national Republicans indicates resources are being directed elsewhere.

“I think, from an inside baseball perspective, that’s saying something. I think that’s saying their resources can be spent better elsewhere. And I think it’s showing a need for a lot of these Republicans to distance themselves … from the current administration,” Moodian said.

Unlike some of the other Republicans, Rohrabacher hasn’t distanced himself from Trump.

On Sunday night, Trump tweeted his support for Rohrabacher and the Congressman thanked him, while also criticizing illegal immigration — an issue he’s previously said is his top priority.

Rohrabacher has said he’s against giving a pathway to citizenship to dreamers because it will bring in more illegal immigrants that would put more strain on already overstressed systems like social programs and schools.

The 71-year-old Rohrabacher, a former speechwriter and special assistant for President Ronald Reagan, has been in the U.S. House of Representatives since 1989. He’s been criticized for his ties to Russian President Vladimir Putin, WikiLeaks founder Julian Assange, pro-Russia views and his push to legalize weed. He’s even recalled a drunken arm wrestling match with Putin that happened over 20 years ago, which Rohrabacher said he lost.

Rohrabacher’s controversies date back to when he was first elected in 1988. Rohrabacher, as a Congressman-elect, flew to Afghanistan for a week to help a mujahideen unit fight the Soviet army. “I didn’t carry a gun—most of the time,” Rohrabacher told Mother Jones in 2010.

The 56-year-old Rouda, a political newcomer, is a real estate investor who was a Republican until 1998 when he switched parties. Rouda’s come under fire from Republicans in the district for saying he supported Medicare for everyone when a moderator, at an undated debate before the primary election, asked if he would give Medicare to undocumented immigrants. His campaign has since said Rouda misspoke and meant to say all legal residents.

Moodian said NPP voters could be the deciding factor in the race, but their turnout numbers remain unclear.

“Hard to say about turnout, but I can tell you in terms of public opinion, the polling that we have done shows that the no party preference voters in Orange County tend to side much more on progressive issues,” Moodian said.

Historically considered a Republican stronghold, election handicapper websites Larry Sabato’s Crystal Ball and The Cook Political Report list the 48th district as a toss-up. Poll aggregator FiveThirtyEight gives Rouda a 56 percent chance of winning with 50.5 percent of the vote, as of Nov. 5.

“If this were a district in which registration numbers were closer, I think Rouda would be a favorite, but given the heavy Republican advantage in registration numbers and Rohrabacher’s shortcomings, I think it’s a toss up … this is something that would have been unheard of two years ago, or any other time,” Moodian said.