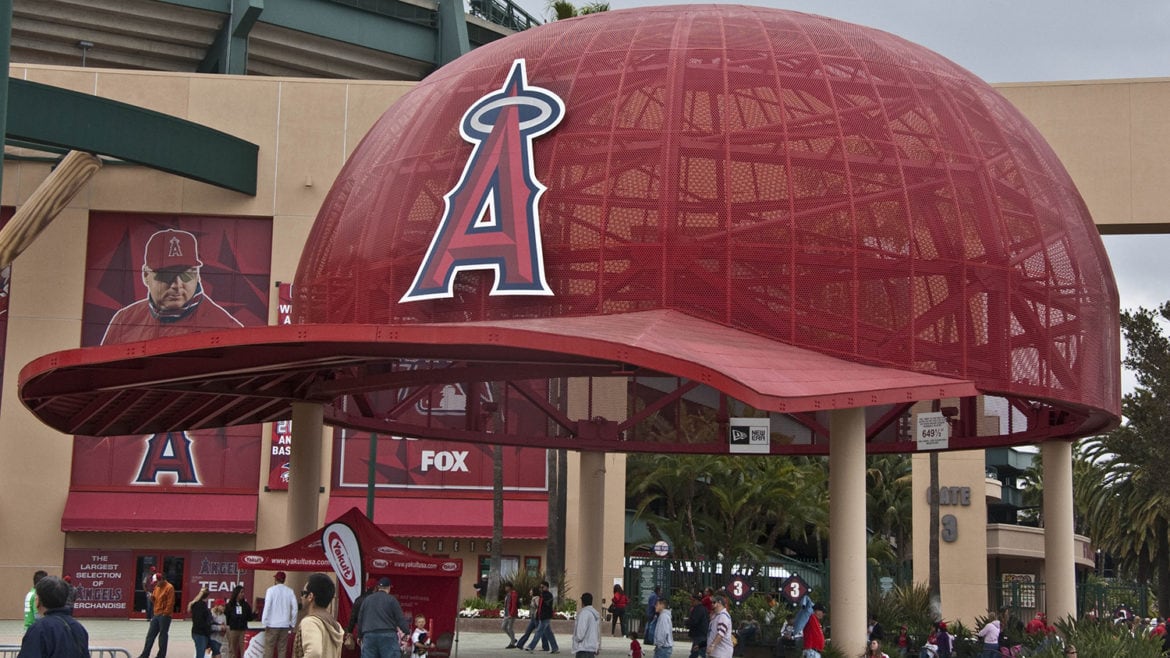 An oversized baseball hat at the entrance to Angel Stadium.

The Angels are talking to Long Beach about potentially moving the team there after the Anaheim City Council extended the stadium lease with the team until 2020.

The Anaheim City Council voted 5-2 to extend the lease to 2020 Jan. 15, with Moreno and Councilwoman Denise Barnes dissenting.

Moreno tried to get the Angels to agree to an exclusive negotiation clause in exchange for the lease approval, but failed to get the council majority to support it.

“This was expected — the Council did vote down my proposal to require exclusive negotiations in return for an extended lease. Unfortunately, the council did not approve that amendment and it’s disappointing that the rational the Council gave and the mayor was they wanted a fresh start to the negotiations,” Moreno said.

Mayor Harry Sidhu, who brought the lease extension to the Council shortly after his inauguration and after meeting with the Angels, said other cities are trying to get the Angels to move there because having the team is a “big benefit” to cities.

“It’s no surprise other cities would try to lure the Angels to leave — having a Major League Baseball franchise is a big benefit to any city. We are confident that the best place for the Angels is and always will be Anaheim, and the one-year extension we granted gives us the time to work out the details and craft an agreement that benefits our residents and the city,” Sidhu said in a statement Monday.

Long Beach is eying property in its downtown area, near the waterfront — where the Long Beach Grand Prix is held annually.

“We are in the early stages of our due diligence and are exploring a variety of options for this property. We have approached the Angels to express our interest and discuss the possibilities of this opportunity. This is very preliminary and discussions are ongoing,” said Long Beach Mayor Robert Garcia in a statement.

The Long Beach Post, who broke the news of the Angels talks, reported city officials are looking to buy a building that would serve as the Angels’ headquarters in Long Beach.

But city spokesman Kevin Lee said the city has been interested in that property for a while.

“…this is a parcel the City has been interested in a long time as it opens up a variety of development opportunities throughout the downtown area,” Lee wrote in a Tuesday email.

Meanwhile, Moreno said the city should start shopping around for other tenants at the city-owned stadium and surrounding property.

“So, as the Angels felt it was in their best interest to shop … I would urge our City Council to consider, upon getting our appraisal, to look at what is the best return value for us and as Mayor Sidhu pronounced in his inauguration, ‘We are open for business,’” Moreno said.

The City Council is awaiting an appraisal of Angel Stadium and Moreno said he expects to get the report by the March 5.

“After all, they (the Angels) are not a nonprofit, they are making money using a city asset. So I was hoping we can do a fair deal, at market rate. In essence what the council affirmed was a strong belief that in order to keep the Angels, what was enacted in effect, was a rent stabilization effort … to keep the Angels in place for another year.”