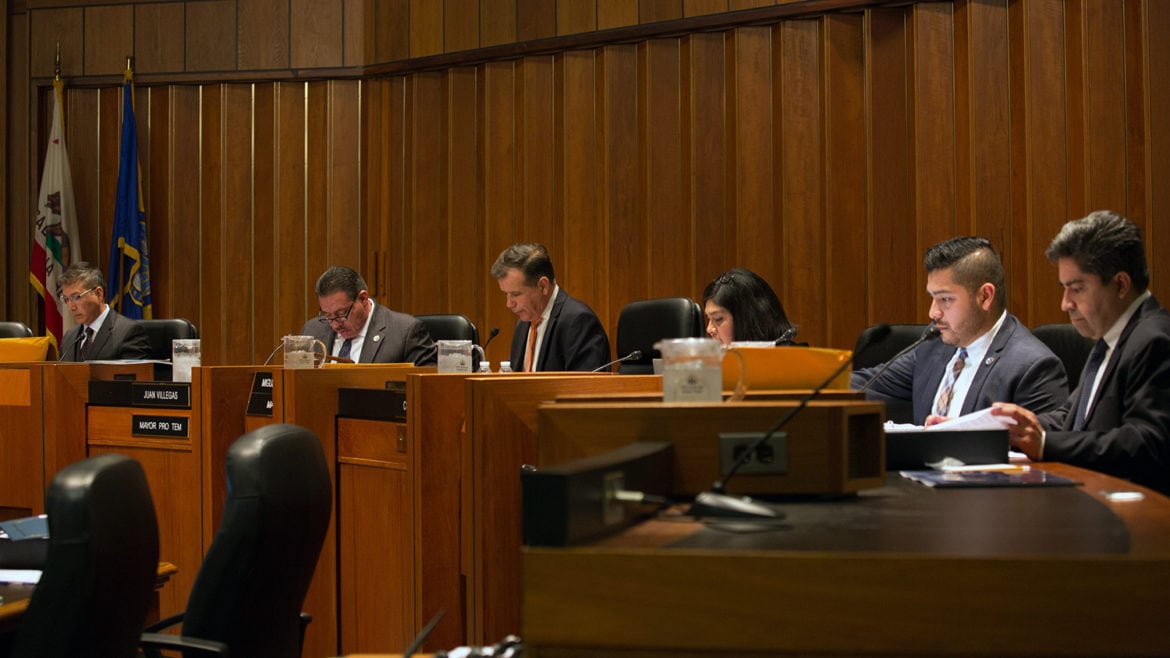 Santa Ana City Council members have put up dozens of parcels of public land along Bristol Street for development, setting clear goalposts for developers hoping to claim a stake along the bustling corridor.

The council members’ actions are also setting the stage for potential lawsuits by critics who argue the city’s move violates state law.

In a unanimous vote, council members opted Tuesday to send 23 of the city’s 88 undeveloped, public land parcels out for private real estate bids — continuing a years-long battle in Santa Ana between city officials pushing for commercial growth through development and affordable housing advocates who see a built-out city already feeling the effects of gentrification and lack of community spaces.

Critics of the Council’s move argue the 23 land parcels are subject to the state Surplus Land Act, which requires the city to prioritize and consider affordable housing options first before shopping public land parcels to private developers.

In an attempt to meet the vocal public outcry, council members directed staff during the vote to add language in the request for developer bids that proposals with community benefit components would be prioritized. Mayor Miguel Pulido publicly contemplated the city buying one of the pieces of property for a public park. Though it seems the city still won’t move forward with the lands in accordance with the Surplus Land Act.

City staff estimate bidders will be selected sometime around May.

Click here to view a map of the 23 parcels the City Council authorized for sale Tuesday.

At least one lawsuit has already been warned by the advocacy group Orange County Communities for Responsible Development (OCCORD), which sent a demand letter to the city Feb. 26 noting the possibility of legal action.

“This is no small matter. The Surplus Land Act is the primary state law governing the sale of city-owned parcels of land” reads the letter. “OCCORD hopes to resolve these concerns without resort to legal action.”

Flor Barajas-Tena, OCCORD’s deputy director, called the letter a “pre-litigation posture” —  a warning that OCCORD could sue if the city doesn’t change course on how it will proceed with the land.

“The city has misled the community by having inconsistent staff reports claiming the land is undevelopable and to be used for community benefit and later claiming they are exempt from the Surplus Land Act in an attempt to circumvent the state law requirements to provide affordable housing and open space,” said Karen Rodriguez, an organizer for OCCORD, addressing the dais Tuesday.

“Santa Ana residents cannot rely on developers to address their most urgent needs,” Rodriguez added. “They expect and deserve their elected officials to do so.”

A city staff report argues the lands are being held for “the purposes of exchange,” a phrase listed as an exemption under the Surplus Land Act, and that the proceeds from the sale of these lands are restricted and have to go back to the Orange County Transportation Agency (OCTA), which bought the lands in a cooperative agreement with the city for efforts to widen Bristol Street.

During council discussion, Councilman Vicente Sarmiento publicly asked City Attorney Sonia Carvalho: “Is your opinion clearly that this is not subject to and is exempt from the Surplus Land Act?”

“I believe it is” exempt, said Carvalho without getting into the reasons listed in the staff report. She then offered to have the city’s position explained in a presentation to the dais, but the Council didn’t take it up.

Sarmiento said that although it’s the city’s position these lands are exempt from state law, it would be “a good idea that we also try to promote, where we can, these public benefit proposals” and have language added to the city’s requests for developer bids stating the city would like to see a community benefit component to those project proposals.

“Those bids that we receive, if they have a public benefit, they might get additional points. They might be looked upon more favorably,” Sarmiento added.

“And that might even mitigate a challenge if something is ever filed against us.”