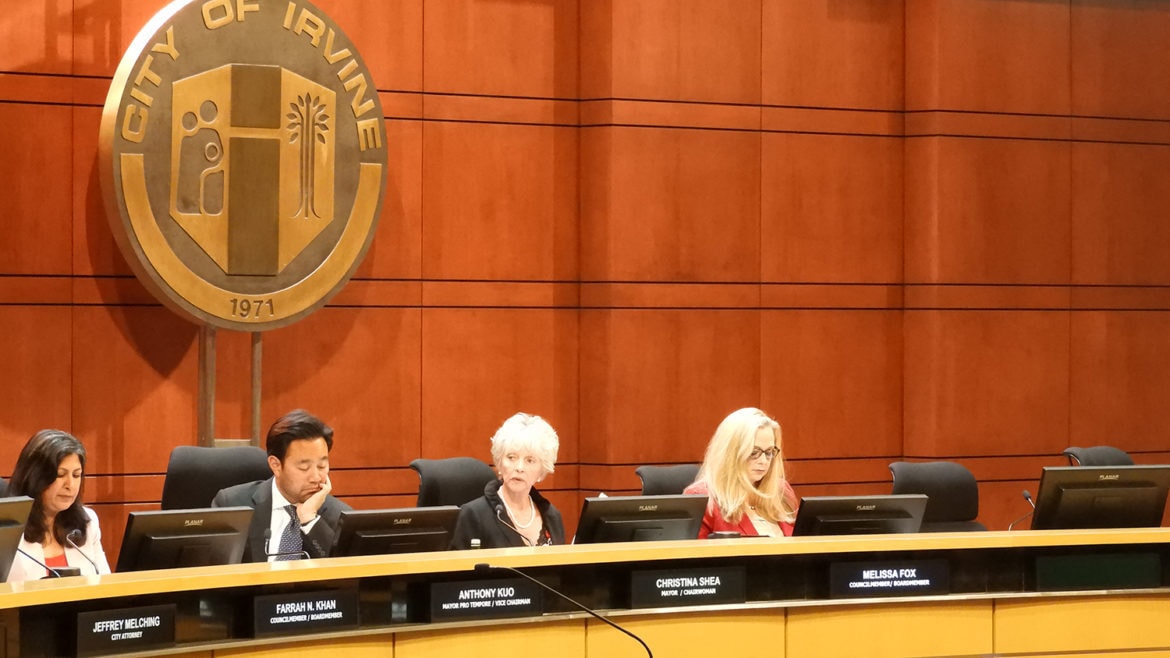 The Irvine City Council discusses how to fill a council vacancy April 9, 2018.

Carroll, who was appointed to the Planning Commission by Councilman Anthony Kuo, won the City Council appointment on a 3-1 vote. Councilwoman Melissa Fox dissented.

He won despite over a dozen residents advocating during public comment for 2018 City Council candidate Carrie O’Malley, who got third place in the November General Election.

Other cities also grappled with council vacancies this year. Santa Ana and Orange decided to hold special elections to fill their vacancies, while Fullerton and Stanton appointed people.

Irvine Council members interviewed a dozen candidates at 15 minutes a piece beginning noon Tuesday to fill the vacancy and narrowed the pool during its regular meeting Tuesday night.

O’Malley and seven other candidates were knocked out in the first of three rounds of votes because they each failed to get support from two councilmembers.

“At least we’re moving in a direction. So what I’ll do is just take those top four and I’ll call those names to approve and I’ll see where we’ll get with that,” Mayor Christina Shea said.

The City Council deadlocked when it individually voted on the four applicants.

“So we still have the same outcome. If there’s any more movement, I can take another vote or else it looks like we’re going to go out to a special election,” Shea said before the final vote.

Fox said the City Council should move to a special election, regardless of the estimated $900,000 cost.

“I’m very supportive of a special election process and I know we talked about money. There’s been a lot of money that has gone into this process of appointment,” Fox said. “It would be interesting to see what it costs us to have all these discussions.”

Councilwoman Farrah Khan said she was in favor of appointing.

“Tonight, I do feel compelled to do what’s right and that is appoint. It’s important for us to understand that $900,000 — whether it comes from the contingency fund or wherever, it has to be repaid,” Khan said. “I urge my council colleagues today to reconsider one more time to find a consensus.”

Khan, who voted no on Carroll’s appointment to the Council two previous times, voted yes on the last round. Carroll was the last name up for a vote during the third round.

Before the final vote, Kuo noted the political differences on the City Council.

“I tell people all the time, there’s no secret here, right now there’s two Republicans (Shea and Kuo) and two Democrats (Fox and Khan) … but we get along and there is a process — this is the process (appointment) that’s been outlined,” Kuo said.

He also reminded everyone that he was the one who introduced the ordinance that effectively put the City Council on an appointment path during the first 60 days of a Council vacancy and after that it could go for a special election. Under state and Irvine law, residents still had a chance to organize a petition to force the Council to go to a special election in 30 days of the vacancy, but the efforts failed to gather enough signatures.

“I did bring the policy forward in January. We voted on it unanimously — twice — with very little public comment. This is a little bit of last minute we’re upset with policy you adopted five months ago … we’re going to take issue today because it’s the 11th hour,” Kuo said.

After the final vote, Shea said it was a good move to appoint Carroll because it saved the city nearly $1 million.

“At least we’ve come to some consensus,” Shea said.