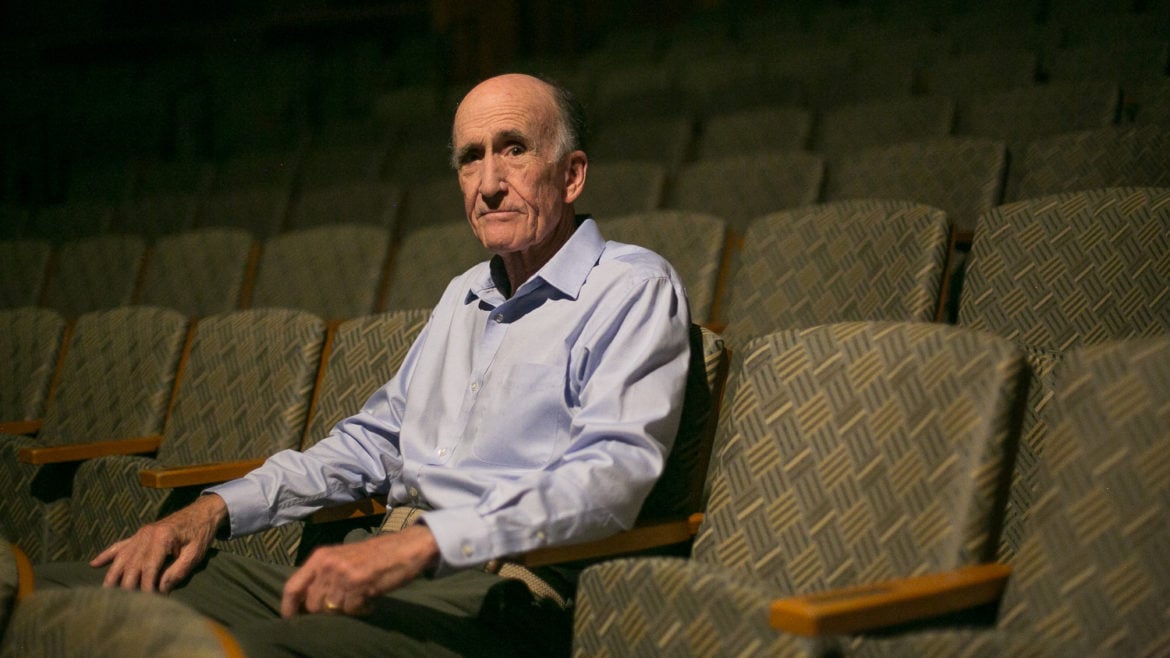 On Nov. 30, 2019, Hal Landon Jr. will begin his 40th and final season as Ebenezer Scrooge in "A Christmas Carol" at South Coast Repertory.

Orange County isn’t a place that’s rich in public traditions, but Christmas is an exception. We have the festive boat parades in Newport and Huntington harbors; the friendly holiday tree competition between South Coast Plaza and Fashion Island. And, of course, we have Ebenezer Scrooge.

South Coast Repertory’s annual production of “A Christmas Carol” is celebrating its 40th anniversary this year, and since its very first performance, only one man has played the crabby old miser at the center of Charles Dickens’ story: Hal Landon Jr. Three generations of Orange County families have come to know his interpretation, sometimes so well that they’re mouthing certain lines along with the actor during his performance. Thousands know and love the moments that Landon has made his own, including Scrooge’s famous somersault into a top hat after his eventful evening has transformed him into a happy man. And legions of aspiring child actors have shared the stage with Landon — the production includes plenty of roles for kids.

After this year, though, SCR’s beloved holiday chestnut will be presented without Landon in the starring role. He has decided that his 40th annual appearance will be his last.

“I didn’t really have an end date in mind,” the 78-year-old actor said. “And, you know, I don’t have a specific reason for the decision. I always have a good time with the role; I enjoyed doing it last year. But I realize I can’t do it forever. I have to stop sometime. And that nice round number of 40 years sounded about right, so what the heck.”

FUN FACT: Over the past 39 years of performing in “A Christmas Carol,” Hal Landon Jr. has only missed three performances. In 1997, he was finishing another play and so for one matinee and two evening shows, director John-David Keller stepped into the role of Scrooge. Keller did not attempt Landon’s signature move – the somersault into the hat trick.

It’s hard to imagine now, but SCR’s holiday show, one of the longest-running productions of “A Christmas Carol” in all of North American theater, was never intended to become a permanent fixture.

“As I remember it, this was kind of a one-time deal — a fun show for the company,” said Art Koustik, who has played Fezziwig in the SCR production for 24 years, among other roles. “It was played very comically, and there were a lot of laughs.”

“It was David Emmes and Martin Benson (the theater company’s co-founders) who wanted it,” said Jerry Patch, who wrote the adaptation of Dickens’ story for SCR. “When we moved into our new theater the thought was, ‘Well, the Guthrie (in Minneapolis) and the Goodman (in Chicago) and some of these other flagship theaters had productions of “A Christmas Carol,” but there’s nobody doing it in Southern California. Why don’t we take it on?’ I was delegated to take a crack at an adaptation. There was no thought of who would play what part.” 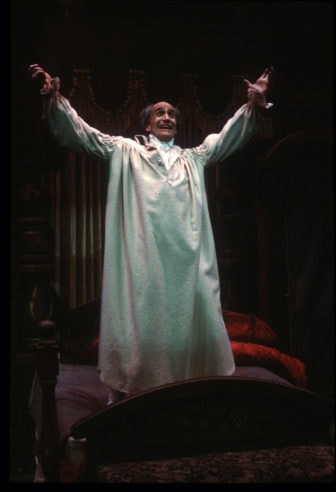 Hal Landon as Ebenezer Scrooge in 1980, the first year South Coast Repertory produced “A Christmas Carol.” Landon would go on to play the role annually for 40 straight years. 2019 will be his final season as Scrooge.

In the fall of 1980, Landon, Koustik and other members of South Coast Repertory’s troupe of resident actors were given copies of the script Patch had penned over the previous few months.

“Jerry just kind of turned us loose on it,” Landon recalled. “(Director) John-David Keller had some very specific ideas about how he wanted it done. I think we leaned a little bit too much toward the comic side of it, which was interesting because there was a portion of the audience that actually preferred that.”

SCR drew heavily on its resident actors for the roles, and Landon was chosen to play Scrooge. The production was a hit, and plans were soon made to bring it back the next year. But after playing Scrooge once, Landon realized he needed to do some rethinking. “This role and this story would not sustain itself unless we went deeper.”

“Hal was not satisfied with that almost commedia dell’arte production of ‘A Christmas Carol’ that we did the first year,” Koustik said. “He wanted to find the bigger truths in the story. And as the years progressed, lo and behold the other company members started falling in line with that. We tried to shed that fun, burlesque kind of approach. We had to be with him to make sure he wasn’t going in one direction and us in the other.”

“To sustain that original interpretation over extended period of time, 40 years, that would have been impossible,” Landon said. “It’s been a process of deepening it and bringing out more of the dark sides of the character and making sure the humor isn’t forced or comes at the expense of anything else.”

SCR founding artist Richard Doyle has played many characters, including the Ghost of Christmas Past, in his 34 years with the production. He’s an unabashed fan of Landon’s work, especially the ways in which he has enriched the portrayal over the decades, which he thinks is worthy of Dickens’ creation.

“It’s a role that no actor worth his salt wouldn’t be happy to play. It has the potential to touch all bases. I love the transformational nature of it, and the ability for (Scrooge), late in life, to overcome all that has held him back. What a role.”

Doyle thinks one of Landon’s wisest choices with Scrooge is not to oversell him.

“It’s a lesson in underplaying and letting the story carry the day. Hal knows that you don’t have to do too much with this particular story. Many in the audience have seen it several times. They know what his reaction is going to be. Hal is a subtle kind of actor, particularly in this. It’s a very studied performance.”

Keller has altered other performances to accentuate Landon’s toned-down approach, Doyle said. “Hal is surrounded by a lot of performances which are purposely heightened to point out that Scrooge is in his own dark place and hasn’t allowed himself to let any light in — particularly the light of human feeling.”

This season, Erika Schindele plays Belle, the love interest of Scrooge in his youth. She thinks the scenes between them are crucial to understanding Scrooge as an older man.

“You get to see Scrooge as a young man before we see him as the miser that he is. She shows us the side of him he knows he can’t have, and reminds him of the heart that he knows he still has.”

Schindele remembers seeing Landon’s Scrooge several times as a child, and his performance stuck with her.  “The beauty to me of the story is the underlying tragedy of that figure. He’s not just treating others badly but growing old without any family.”

Landon’s success with the role is due in part to his dedication to it. Over the years, he has become something of a Dickens scholar, having read all of the prolific Victorian author’s work. 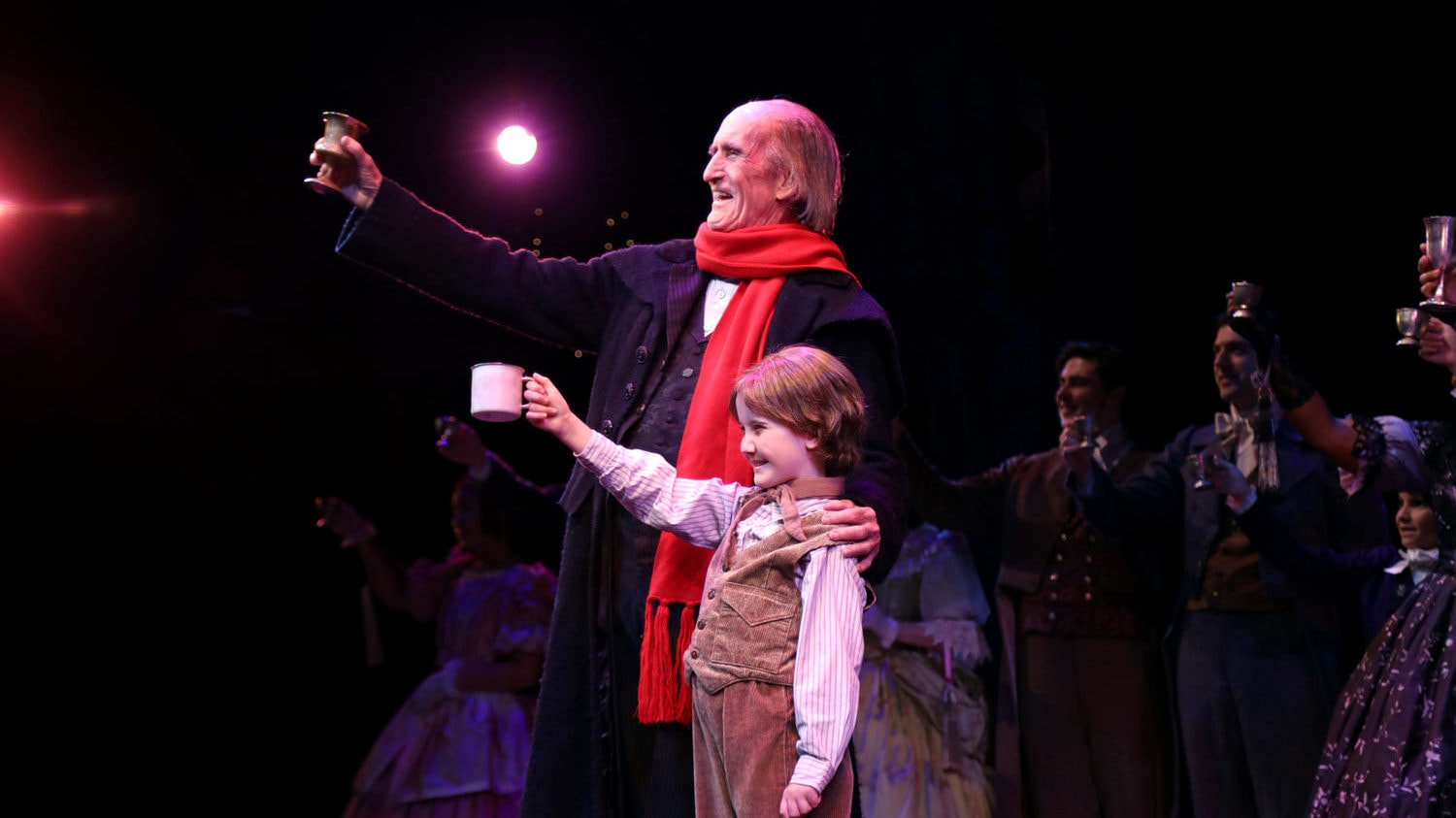 Hal Landon Jr. and Presley Coogan in ​SCR’s 201​8 production of A Christmas Carol.

“Before I played this role, I knew who Dickens was and had read some of his things in college,” Landon said. “Then I got this idea years ago to read one of his novels each year when rehearsals started. My imagination kicked into gear. What a treat that’s turned out to be! Then I started listening to Dickens, audio books read by these English actors. They’re brilliant. They’ve given me a deeper understanding of his concerns and his world.”

Landon reiterated several times that surrendering the top hat does not signal the end of his career.

“I’m retiring from Scrooge, but I’m not retiring from acting. They decided to make a third ‘Bill and Ted’ movie. We filmed that this summer in New Orleans.” (One of Landon’s most famous film roles is the character of Captain Logan in Bill and Ted’s Excellent Adventure and its sequels.)

Landon and his wife are taking more trips now; they recently toured the Canadian Rockies. “I’m mixing work and pleasure these days, and I’m doing more of the things I like. I still teach an acting class at Saddleback College. At my age, there aren’t as many parts as there once were. But I’m still getting work!”