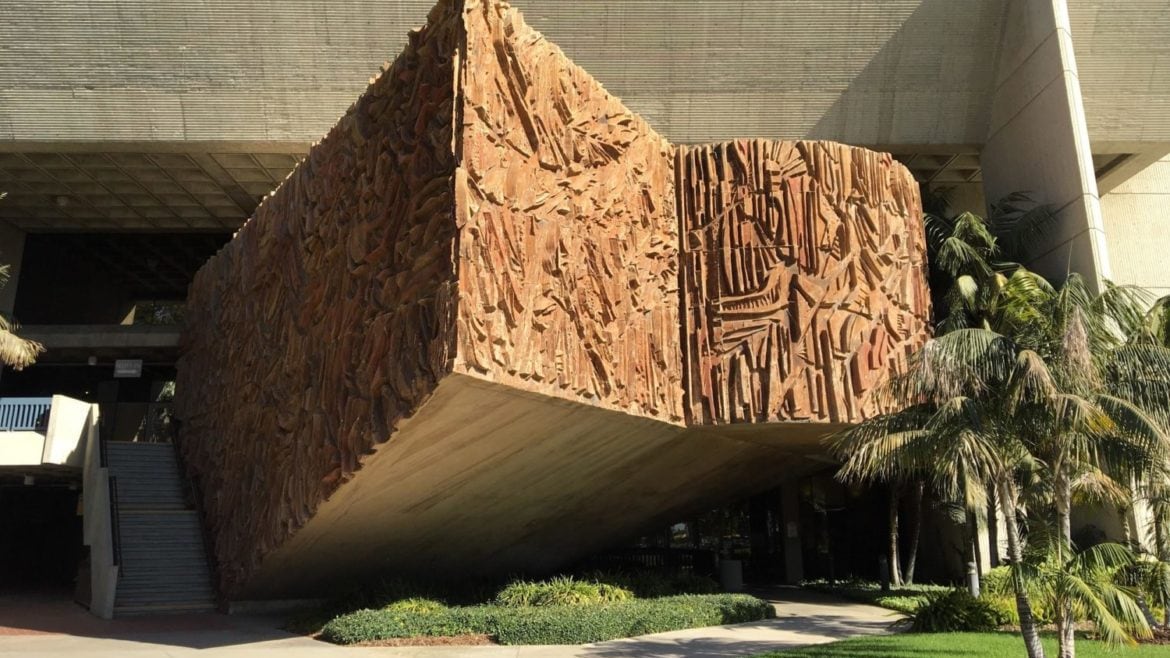 A view of Sergio O'Cadiz's "Library Mural" from the center of Cypress College's campus.

Back in July, a Santa Ana mural by Mexican American artist Sergio O’Cadiz — created in 1994 with help from local youths and community members — was whitewashed, presumably by the property owner.

While Orange County did lose a significant piece of its cultural and artistic history, there was a silver lining to the tragedy.

The covering up of O’Cadiz’s Raitt Street mural has renewed interest in the artist. He died at age 67 while working in his Orange studio on March 26, 2002. Ever since the controversial creation (1974-76) and destruction of his massive, 625-foot-long Colonia Juarez mural in Fountain Valley in 2001, O’Cadiz was not the same. His star had fallen and he had fewer work opportunities available, according to his own accounts. Since his passing, his supporters and family feared he would be forgotten. 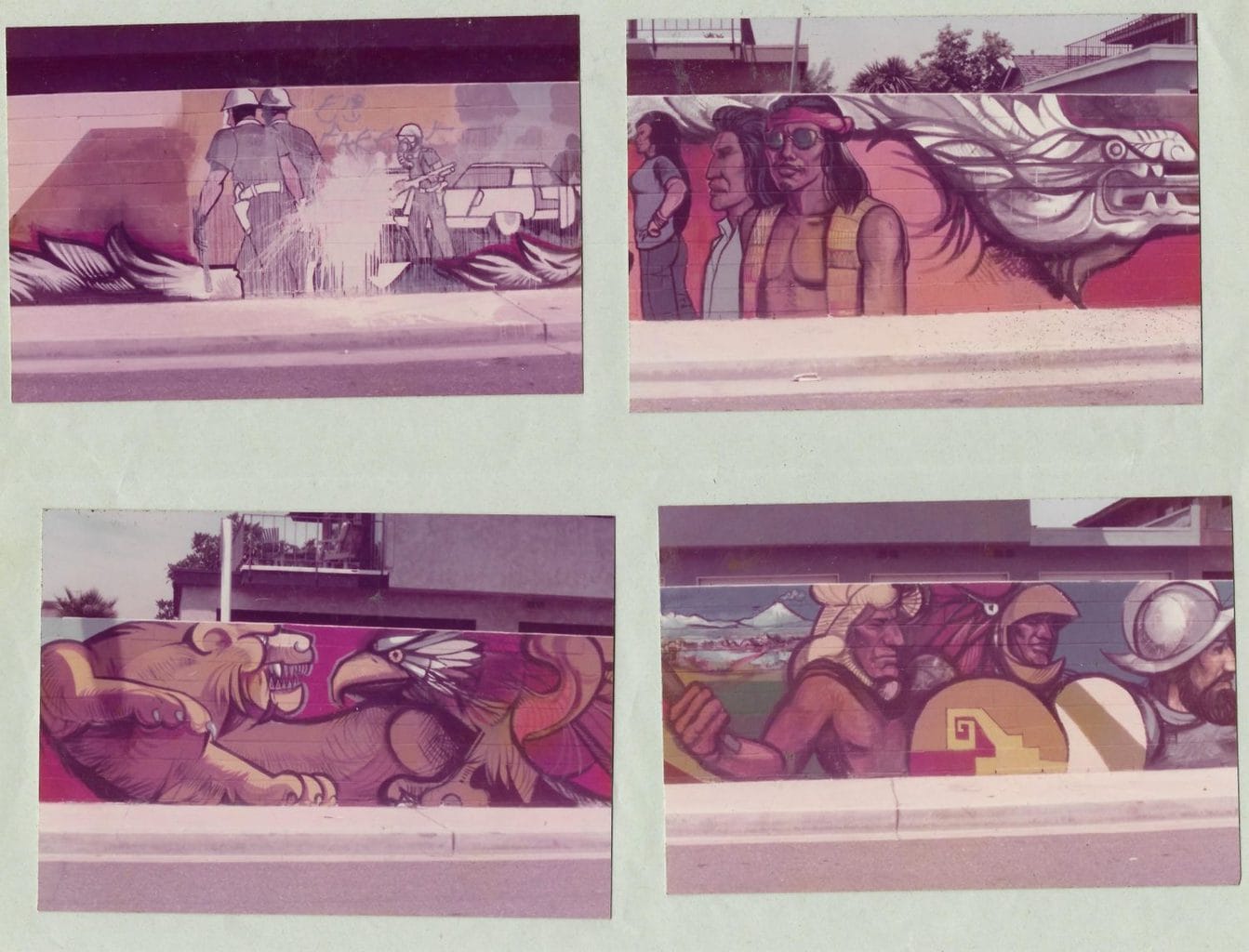 Images of Sergio O’Cadiz’s Colonia Juarez mural, painted along a 625-foot-long wall in Fountain Valley. It was painted between 1974 and 1976, and destroyed in 2001.

Yet, this year, as news of the whitewashing spread, Santa Ana’s Arts and Culture Commission discussed drafting and implementing some kind of policy for the creation and restoration of murals.

The Cypress show makes mention of the Raitt Street incident. That colorful, children-animated mural, with 1990s downtown Santa Ana as a backdrop, was a true community effort, publicly funded through Santa Ana’s Safe Haven Youth Program. It was the pride of the community for decades, until it fell into disrepair and got tagged. In July, a renegade restoration effort miffed the property owner, who had the mural covered up with white paint. 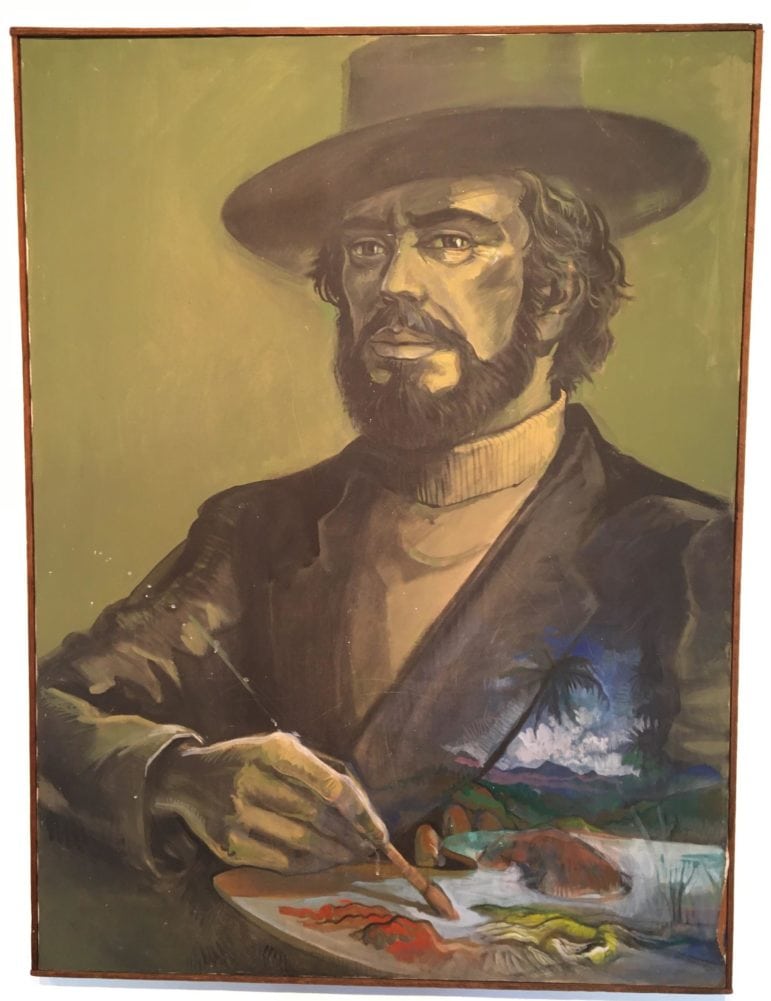 But a main focus of the Cypress College Art Gallery exhibit is on the Library Mural, literally a couple dozen steps away from the school’s Fine Arts building. The impressive Brutalist concrete mural now wraps and extends from the renamed Cypress College Complex. The library has moved to the east.

The O’Cadiz exhibit includes black-and-white photographs by Julius Shulman of the mural and its surroundings, as well as photos taken during the creation of the mural, some of them by O’Cadiz himself. There are written accounts of the Library Mural as well, including a negative review by then-Cypress College President Daniel Walker, who said it would “renovate the whole scrap iron business.” 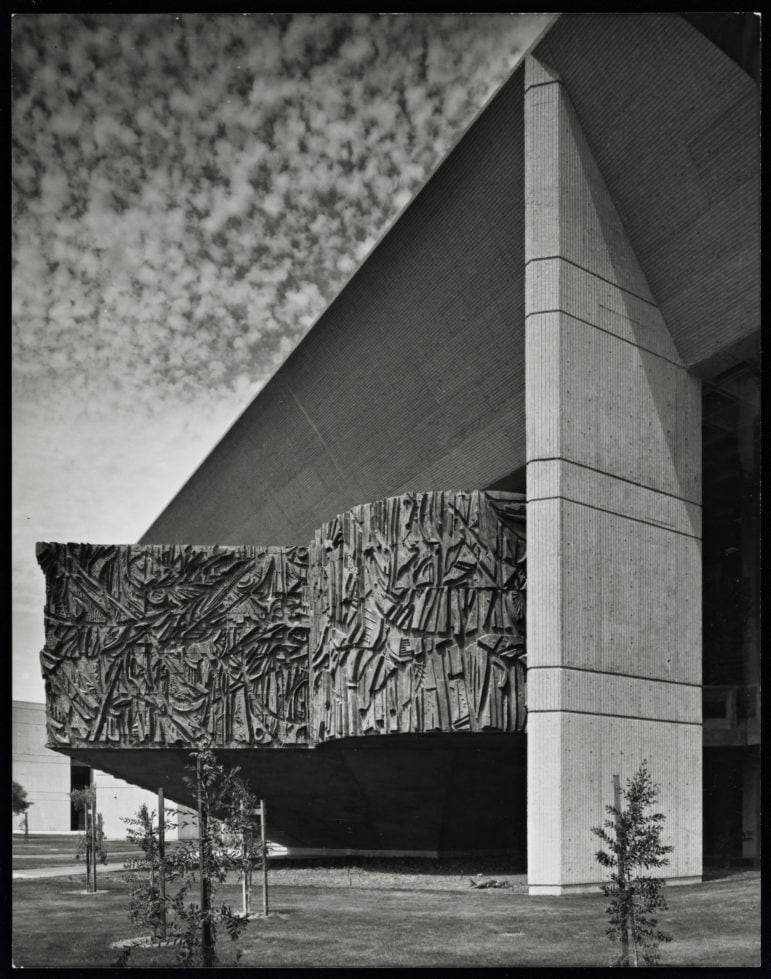 “This exhibit has really brought his work to people’s attention,” said Maria del Pilar O’Cadiz, the deceased artist’s daughter, a longtime resident of Santa Ana and the education director of an engineering research center at UCLA. “It’s well done and it accurately represents his work. Particularly the Library Mural is presented in an informed manner, in an art history context.”

Library Mural is clearly O’Cadiz’s masterpiece, his magnus opus. There’s nothing else quite like it in Orange County. In fact, you’d have to search far and wide in all of Southern California to find such a massive concrete mural that contains so much expression, design, hidden imagery and clever geometry. 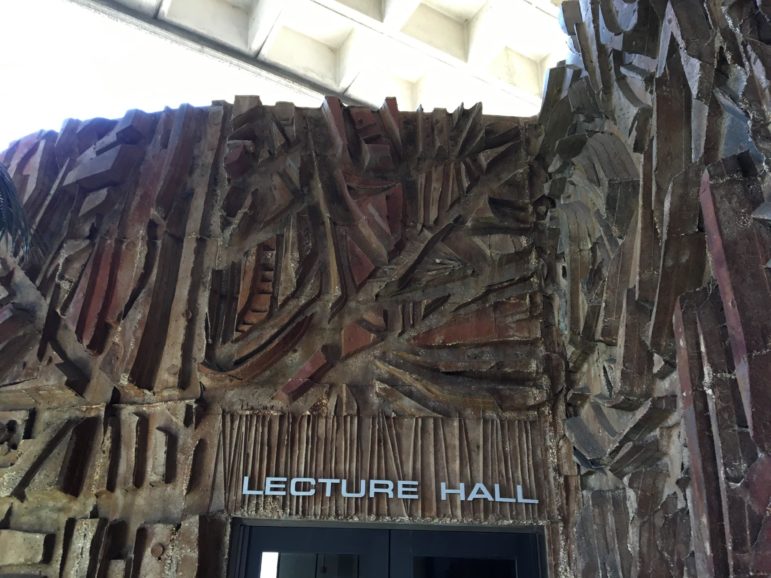 The rust-colored mural wraps around a second-floor balcony, yet really embraces the entryway of the Cypress College Complex and circles back to its base. A stairway runs adjacent to the heart of the mural, so it’s unavoidable since many students, staff and faculty have to do business in the administrative building.

Much of the three-dimensional design actually looks like wood carving, yet on a grander scale. While it’s dominated by abstract and expressionist shapes and lines, one can certainly make out plenty of recognizable images — a rooster, human figures, animal teeth, a Darth Vader-like character, suns with sharp, linear rays.

“It’s incredibly expressive and dynamic, and done in the method that the Brutalist architects use,” said Janet Owen Driggs, curator of the O’Cadiz exhibition and gallery director of the Cypress Art Gallery. She’s also an associate professor in the college’s art department. 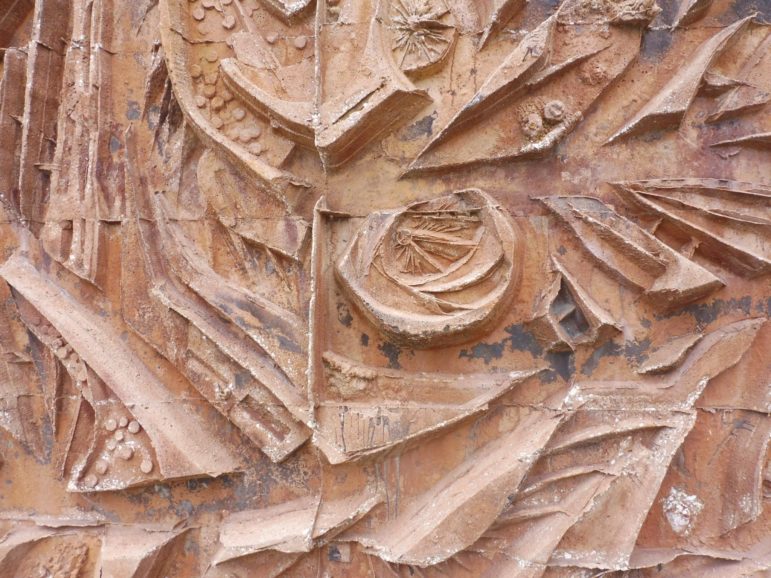 Conservation photo of “Library Mural” taken by Mary Slater in 2017. One can see geometric shapes, suns and rising shapes and dots in the detail.

“What Sergio does from an art historian’s point of view, he acts as a bridge to a number of different movements. He brings with him a very expressive sensibility. He’s fully trained in the Brutalist architecture style. He’s a muralist in the tradition of Mexican muralists. But he adapts Brutalism and uses new technology, he uses new techniques. He’s a real pioneer in that fashion. He uses the same technique to articulate his ideas and feeling and thoughts.”

In case you’re wondering, “Brutalism” does not refer to extreme violence, oppression or punishing discomfort. Brutalism, and Brutalist architecture, is a style that emerged from the 1950s and grew out of early 20th-century modernism.

The exhibition helps put Library Mural into the context of the building of Cypress College and many of its structures in 1967. O’Cadiz was hired by William Blurock, the primary architect for the first phase of Cypress College’s construction.

While many of the surrounding buildings looked the same, the library truly stood out because of O’Cadiz’s mural.

“It’s a radical thing to be saying and not saying in an otherwise comparatively homogeneous place,” Owen Driggs said.

Julius Shulman, a celebrated photographer who captured many of Los Angeles’ iconic structures in the 1950s through ‘80s, took several pictures of Library Mural in 1970. These black-and-white images are also on display.

Visitors can also see nearly a dozen of O’Cadiz’s acrylic and oil paintings, many of which concentrate on Pre-Columbian and indigenous cultures and figures. 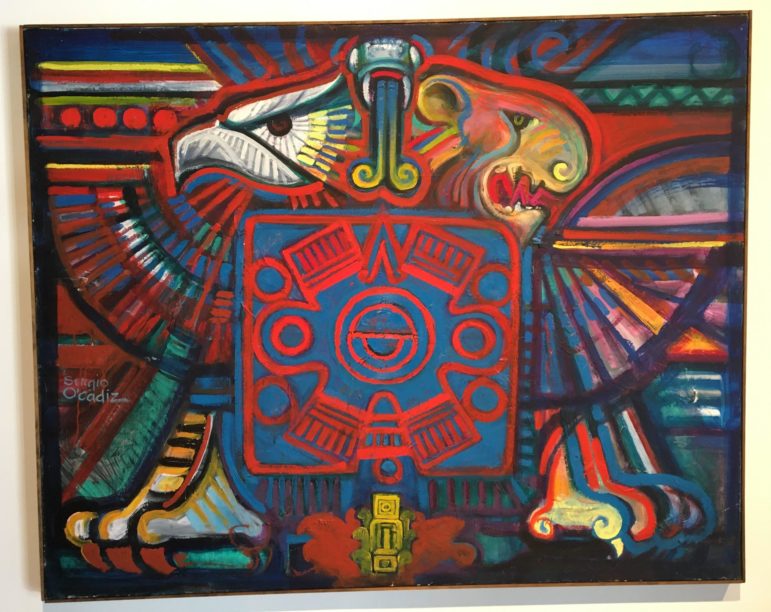 “Formacion de Identidad Mexicana-Americana en la Era del Quinto Sol (Formation of Mexican-American Identity in the Age of the Fifth Sun),” a circa 1995 acrylic on canvas by Sergio O’Cadiz. On view at Cypress College Art Gallery through Nov. 14, 2019. 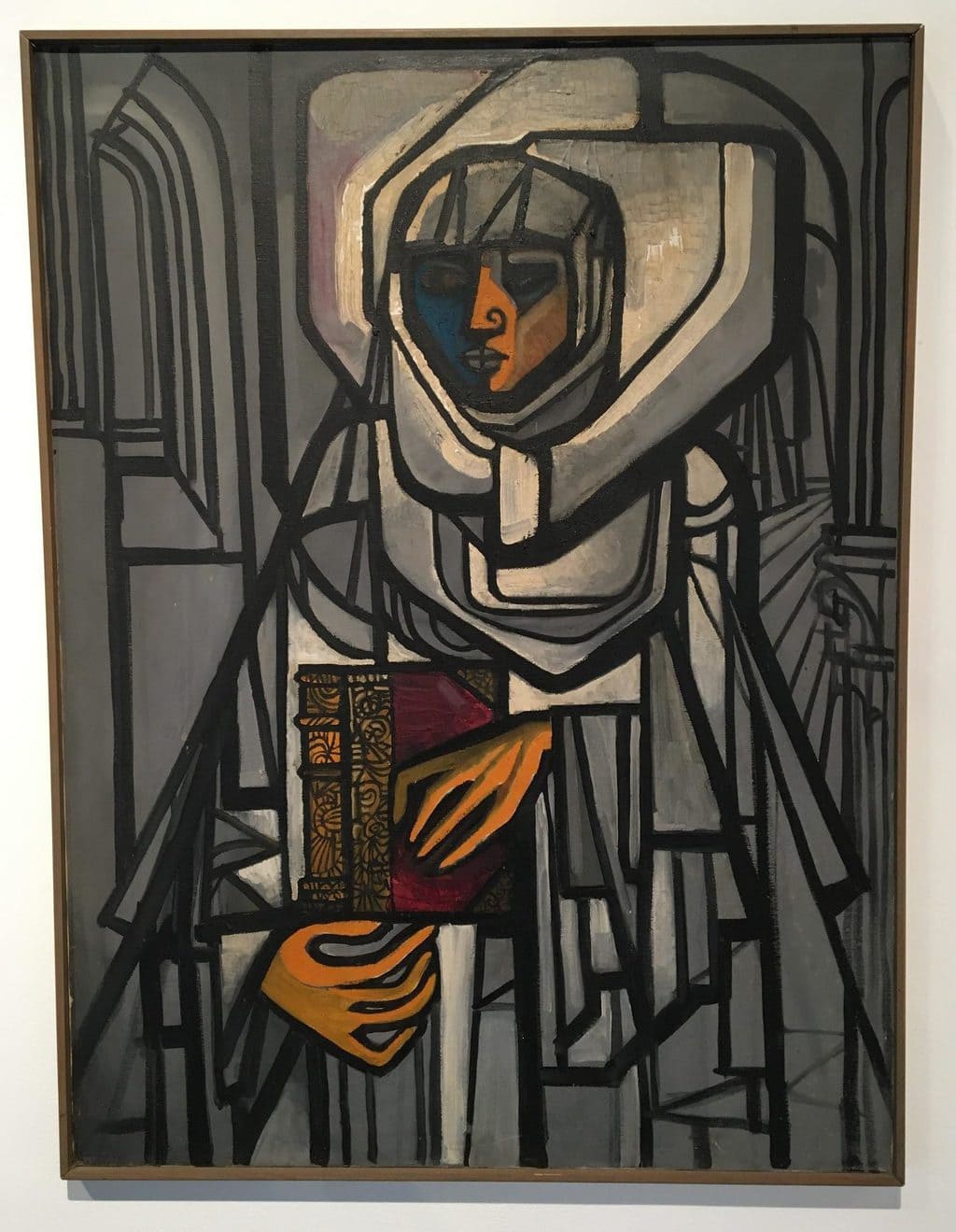 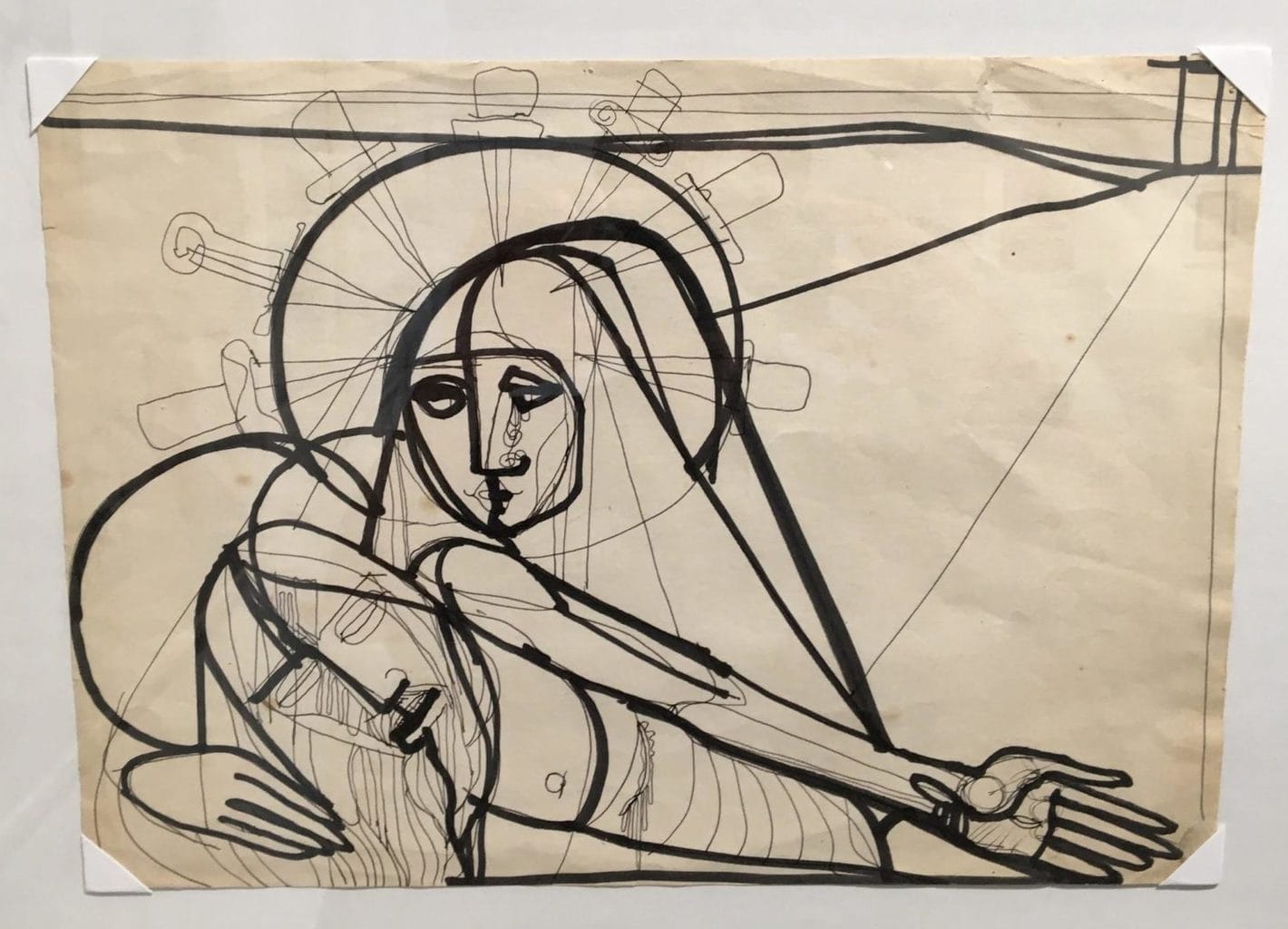 A drawing by Sergio O’Cadiz depicts a geometric Jesus dying in the arms of his mother Mary. Hand-drawn daggers punctuate Mary’s halo. 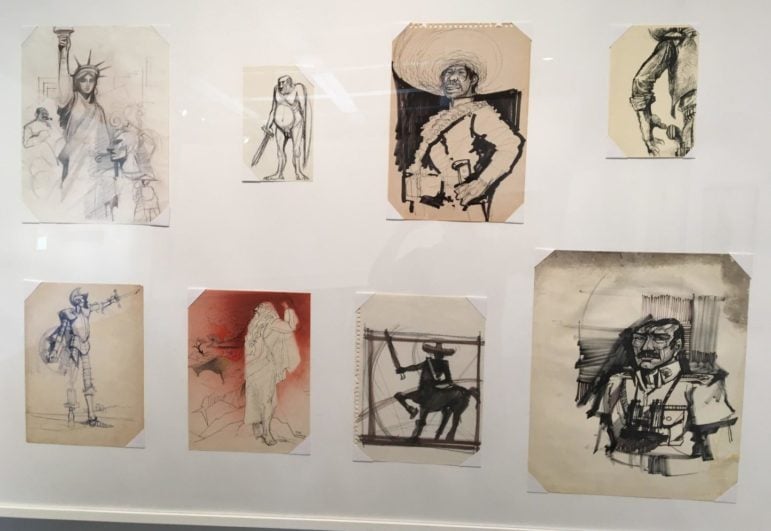 Drawings by Sergio O’Cadiz in the Cypress College retrospective exhibition of O’Cadiz’s work. He drew Mexican men, the Statue of Liberty, knights in armor and a cowboy reaching for his gun.

There’s a timeline of the artist’s career, as well as imagery and historical accounts of O’Cadiz’s other public works: a concrete relief mural for Santa Ana City Hall, the elaborate MECha mural he did with students for Santa Ana College in 1974, and the epic Colonia Juarez mural he created with members of the Fountain Valley community in 1974-76.

One section features O’Cadiz’s drawings. He drew a variety of subjects, from men and women to animals to buildings and nature. A very geometric portrait of Jesus in the arms of his mother Mary is lightly punctuated with hand-drawn daggers. For some reason, it does not look unusual at all. The sculptor and painter was also quite a fine draughtsman.

Family members and those interested in O’Cadiz’s life and accomplishments are hoping that interest in this exhibition will help fuel an effort to restore the Raitt Street Mural.

Pilar O’Cadiz has been in discussion with various entities, talking about the possibility of removing the white paint from the mural. While difficult, this has been done before with famous murals, such as David Alfaro Siqueiros’ “América Tropical” in L.A.’s Chinatown.

Meanwhile, Santa Ana’s Arts and Culture Commission has formed a subcommittee to investigate best practices of drafting and implementing a city mural policy, according to Tram Le, the city’s arts and culture specialist. The members of the subcommittee will report their findings at the next regular commission meeting on Jan. 16, 2020.

Free For Students and the Public

While the retrospective will close Nov. 14, 2019, O’Cadiz’s greatest achievement lives on, embracing and jutting out of the Cypress College Complex in the center of campus. It was restored in 2017, and really does look impressive, even to students and visitors who don’t know what it is.

“I definitely noticed it when I walked up (to the complex),” said Iveth Avila, 27, a first-year nursing student at Cypress College. “It must have taken a long time. It’s really detailed.”

Linh Dang, 26, said she hadn’t really noticed it before, until it was pointed out.

“I think it’s pretty cool,” said the second-year chemistry student. “I have no idea what it is, but it looks pretty, I guess.” 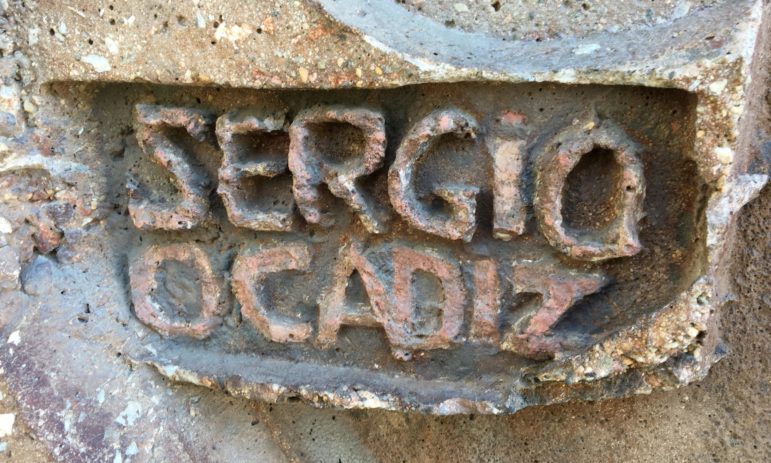 If you look carefully at Sergio O’Cadiz’s “Library Mural,” you can see that he signed it in the bottom right hand corner.